Looks like a NYT debut puzzle from Evan Kalish! But given the theme, I may have just ruined a secret. 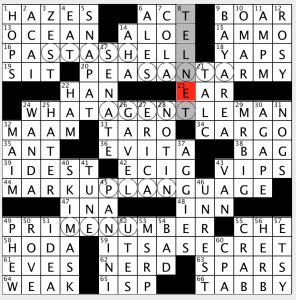 The concept here is nothing new, but it’s deftly executed and perfectly fine Monday fare. Embedded within each of the theme answers is a word that can follow “secret.”

Six theme answers is quite a bit to include in a 15×15 grid, but it didn’t seem the fill suffered all that much. I wonder how many grids Evan experimented with before settling on this design? Stacking themers on top of one another always seems like risky business to me, but the only piece of fill that seemed a bit hairy (for me anyway) was TELNET… and that’s me being picky. I am super impressed with how smooth the grid was given the constraints.

Another fun and ambitious puzzle of Evan’s recently appeared in the Puzzle Society Crossword. Check out the grid and his enlightening notes on it here. 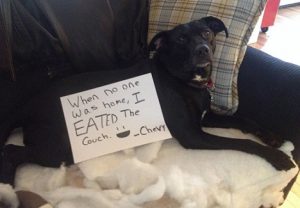 If ever there was a trend to revive, it’s the dog-shaming trend.

Excellent debut, Evan! I like that the “secret” words were “secretly” embedded. I’m looking forward to future puzzles. 4.2 stars from me for the construction alone.

Oh, happy day! We have a nice, fresh-feeling puzzle on our hands. 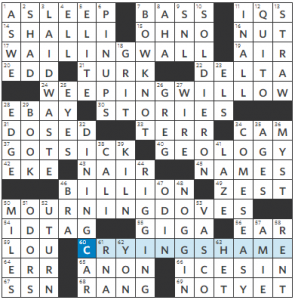 That last one aside, this is a nice, lively set, and I enjoyed the theme.

But that was just the beginning. There’s a lot of fun fill here and fresh clues to round it out. I’m liking LAID WASTE, COMES EASY, DINING CAR, BOW KNOT, GOT SICK, GEOLOGY, RIGGING, NOGGIN, and especially SOLDIER ON. Alex really crammed a lot of goodies in here!

There were only two short bits of fill that irked, and as I was able to fill them in at the very end, they didn’t really bother me so much: HET [Charged (up)] and EDD [China on the Discovery Channel]. I assume that last one is a person.

As I said, clues felt fresh all over, but I liked [Place to eat while training?] for DINING CAR best.

Despite a theme based on sadness, this was the funnest WSJ grid I’ve done in a while thanks to the evocative theme entries, loads of fun fill, and great cluing. 3.9 stars from me. 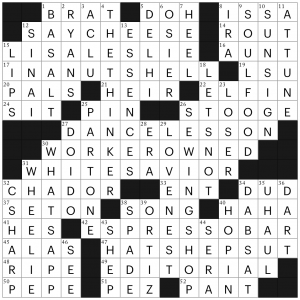 Happy Monday!  Hopefully your week is off to a good start, and if you’re in the US, we’ve got a weird bifurcated week due to the 4th of July anyways, so it can’t get too bad, right?  The New Yorker puzzle continues to be great, so we’re off to a great start.

Natan’s latest entry in the rotation was a nice smooth solve, with lots of crunchy fill and a nice high-low blend of word sources that feels like a nice signature of the New Yorker puzzles so far.

An alternate clue for 41A: “___ the DJ, I’m the Vampire”. Rockula is currently available for your viewing pleasure on Amazon Prime and in addition to this VERY early 90s rap number, it has Toni Basil and Thomas Dolby, who are not actors, but act in this movie.

Another very solid New Yorker puzzle – these have become a highlight of the week for me. 4.25/5 stars. 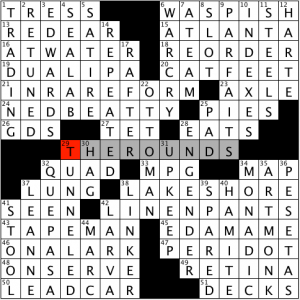 The things, they are five:

Prayer service. Private practice. Pro-choice. Pride and Prejudice. What could these have in common? They could all serve as themers for today’s puzzle (if only they’d been the right lengths!): 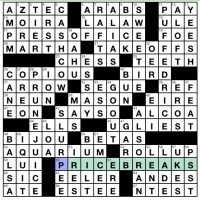 The word PRICE is literally broken and, like many door busters, stuffed with savings! I mean, other letters to form longer theme entries! None of the themers are particularly vibrant, but they certainly do the trick. My one nitpick would be that all three themers should either break up PRICE the same way or each one should break PRICE differently. Instead, we have one P-RICE and two PR-ICE entries, which is a tad inelegant.

Y’all know I have to point this out: 39a: MAS as the answer to [Pas’ partners]. Not always! Did you know that two people of the same gender can co-parent? What?! Crazy! It’s amazing what “, sometimes” would do to make that clue more inclusive. Or, even better, what about [Mas’ partners, sometimes]?

#includemorewomen watch: Relative to other puzzles, we have a nice collection of women featured today: MOIRA Shearer, MARTHA Washington, ESTEE Lauder, ZORA Neale Hurston, and, of course, MAS. Let’s learn more about ZORA! According to her Wikipedia page, “Zora Neale Hurston (January 7, 1891– January 28, 1960) was an influential author of African-American literature and anthropologist, who portrayed racial struggles in the early 20th century American South, and published research on Haitian voodoo. Of Hurston’s four novels and more than 50 published short stories, plays, and essays, her most popular is the 1937 novel Their Eyes Were Watching God.” Talented women of color represent!