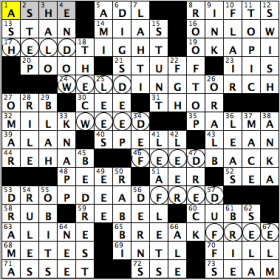 Good day, everybody! As you might have heard by now, the wonderful Janie Smulyan called time on her Crossword Nation blogging duties after an amazing five years, and, before starting on my take on today’s puzzle, I just want to express how grateful I am for taking over for such a stalwart in the crossword puzzle community. It’s an absolute honor to follow in her footsteps on this space and, if you haven’t already, thank Janie for her dedication and her lively write-ups every week for five years! Bravo, Janie!

I am thrilled beyond measure to share my take on the Crossword Nation puzzles, and Liz (Gorski) has been someone that I have admired from afar for a while now as each and every crossword always brings a great level of enjoyment. Today’s puzzle had its own FLAIR (10D: [Talent]) as well, as a word ladder helps to execute the theme, as one letter is changed within the circled boxes for each successive theme entry. Normally, the first word formed in the circles ends up having the complete opposite meaning of the final word in the latter, and that’s the case today with HELD eventually morphing into the word FREE.

There definitely is a good chance that a sub theme was intended with this grid (especially with the last theme clue and entry), given that we are just a couple of days from Independence Day. If in the event that you are hosting a barbecue for the Fourth and are doing some cooking, let me know if you have some special RUB that you use on your meats – and what you put in it to create that specific rub of yours (58A: [Barbecuer’s spice application]). I’ve been watching the Cooking Channel a lot over the past couple of weeks, which probably will help my ability to create a good rub when being in charge of the grill next time. Oh, and maybe ROOFTOP completes the sub theme, given that a number of people will head up the elevator and onto the roof to catch some Fourth of July fireworks (8D: [Santa’s parking place]). What are your plans for the Fourth? (Well, outside of trying not to bake during this heatwave that’s gripping a good part of the country, of course.)

Speaking of rooftops, how many people have ever experienced watching a CUBS game in Chicago from the rooftops of the buildings that are across the street from Wrigley Field on Waveland and/or Sheffield Aves. (60A: [Mama bear’s babies])? I think the recent renovations at the stadium, including adding a couple of video boards in the outfield, might have taken away that vantage point from those people watching the games inside of those buildings, but that would be something really cool to experience.

Not sure I’ve come across the “I” in a crossword clue dealing with the series of Sue Grafton novels until today’s IIS (23A: [Sue Grafton’s “____ for Innocent”]). We have a number of women represented in the grid, led by LAHTI (7D: [Christine of “Chicago Hope”]) and SELA (62D: [TV actress Ward]), let alone the Phoebe Cates reference in one of the the clues to one of the theme entries. Love that aspect, and, overall, it was a fun solve!

“Sports will make you smarter” moment of the day: POOH (20A: [Milne’s “hunny” bear]) – For those not familiar with my blogs, I end each of them by selecting an entry in the grid that, normally, does not have a sports connotation in its clue and reimagine it through the lens of sports. For today, we can talk about Jerome “Pooh” Richardson, the former NBA basketball player who was the first-ever draft pick of the then-expansion Minnesota Timberwolves franchise in 1989. Pooh played his college basketball at UCLA and was a three-time All-Pac-10 First Team selection, from 1987-1989. In 10 seasons in the NBA, Pooh averaged 11.1 points and 6.5 assists, with his best professional season coming in 1990-1991, when he averaged 17.1 points and 9.0 assists while starting all 82 games.

Thank you so much for your time, everyone! I definitely hope to see you all here next week, and, as our intrepid blogger Janie would always say, keep solving!! 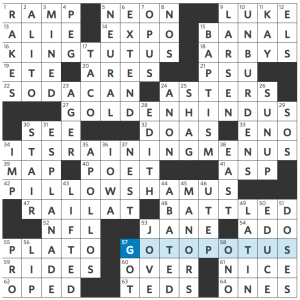 Do we get an anti-patriotic theme for July 3? (Better that than America First.) The constructor’s name isn’t in our tag library, so we either have a debut (in which case, congrats, Lewis!) or a new pseudonym.

Many possibilities here for this theme-type; IT’S RAINING MENUS is my fave and likely the seed. Fill notes that pertain to weird intellectual comedy: 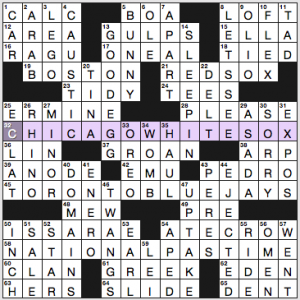 We’ve got left/right symmetry here to facilitate the inclusion of the BOSTON / RED SOX. It’s a red-white-and-blue baseball theme:

Cute, crisp theme (except for the inapt inclusion of a Canadian team—though it was just Canada Day on July 1, and that’s as patriotic as Independence Day but without the color BLUE being featured).

The puzzle fell quickly, so the grid is pretty smooth—but there are a few entries that might give pause to newbies. Maya LIN, Jean ARP, ANODE, MEW, ECLAT, OLIO. I could see the ECLAT/LIN/ANODE crossings snagging some folks.

Highlights: ISSA RAE, GOOD EGG. Really weird clue for ISSA RAE: [Co-starring actress on HBO’s “Insecure”]. She is the lead actor on the show, co-created the series, and writes some of the episodes. “Co-starring actress” downgrades her centrality to the show.

I liked these clues:

I could’ve done without all the extra baseball clues for those eight or nine filler entries, but I suppose baseball junkies appreciated them. 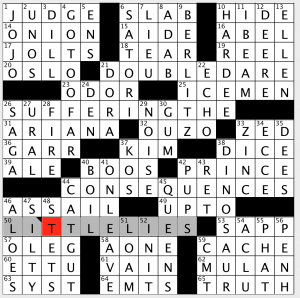 Another fun Jonesin’ to start this holiday week. With the revealer at the end, that makes it slightly harder to get what is happening, but in the end I found it clever:

The first two instances are derived from familiar phrases (truth or dare, truth or consequences), while the last instance is more of just an opposite form. Still a clever gimmick, and it adds to the challenge when one long entry spans two theme slots, although with “consequences” weighing in at 12 letters, you have no choice! 4.5 stars today.

Maybe that’s more than a couple. Be careful in this heat! 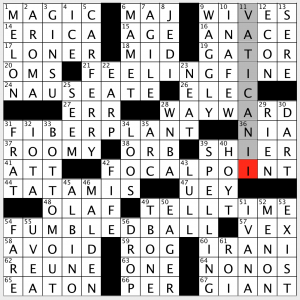 This theme took me a minute to understand once I was done! I will highlight what is going on, but I am sure you all figured this out faster than me:

Does this remind you of Jack and the Beanstalk, where the giant says this all the time? I don’t know why it took me so long to see the fee-fi-fo-fum letters in the them answers; I will again blame it on a lack of sleep. I didn’t get my weekend nap! Man, I am sounding old. 4.4 stars today.

Enjoy your day off tomorrow! (If you HAVE Wednesday off!)