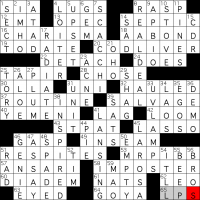 hello and welcome to episode #526 of matt gaffney’s weekly crossword contest, “Make It Brief”. for this week 5 puzzle of guest constructor month, we have Will Nediger of bewilderingly, who challenges us to find a three-letter word. okay. well, what are the theme entries?

… i don’t know. i haven’t solved the meta, and i am running out of time to do so. but i might as well write out my ideas and see if something clicks.

the title suggests abbreviating, and there are a handful of entries in the grid that are (or include) a short form of a longer word or name:

what do we do with these? i don’t know. there’s also one in the clues ({Defib expert} for EMT); that may or may not be relevant. and as usual, there are a handful of actual abbreviations and initialisms (including ST and AP in the above answers, plus things like EMT, OPEC, and IMHO) in the grid; those seem less likely to me to be relevant to the theme.

i was looking at the parts that got abbreviated out, like -versity, -ical, etc., and wondering if there were other beginnings for those endings, like DIVERSITY or LEXICAL. or, if the bits that we had left could also be the short for something else, like UNI could be uniform, or RAD could stand for radian (or radiation absorbed dose). and indeed, RADIATE is in the grid also; i believe it’s the only grid entry that starts with one of our (hypothesized) theme answers. wait, no, there’s also UNIT. but there’s no click yet.

other than NATS and BROS, the other theme answers are all followed by a black square in the grid, which seems like it might be important. notably, RAD and TIM are short answers that are followed by cheater squares in the southwest corner, necessitating a somewhat unusual-looking grid pattern. if NATS and BROS aren’t theme answers (because the part that got abbreviated away isn’t at the end of the word), then maybe we’re supposed to do something like write in the extra bits in the black squares? i dunno.

looking at the bigger picture, is eight (or even six) very short theme answers enough content for a 15×15 grid with a pretty high word count and a hefty number of black squares, including six cheaters? i think not, especially not for a highly talented and experienced constructor like will. so there’s probably a handful of other theme answers, but i’m guessing not a lot more, since there’s nowhere in the grid where the fill obviously suffers from too much theme.

i’m a little disappointed that i didn’t really give this one my best effort, as i was away for much of the weekend and didn’t get a chance to look at the puzzle until monday. oh well. i strongly suspect that this one had a good payoff, but i didn’t get there. somebody let me know in the comments, okay?