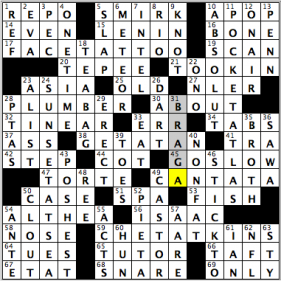 Hello once again, crossword lovers! Hope all is well with you to start your crossword-solving Tuesday!

Today’s Crossword Nation puzzle put me in the foreign-language-learning mood for when I’ll be in Montréal next month and continuing to immerse myself in French in my never-ending quest to become fluent; Five multiple-word theme entries contain the letters ÉTAT (without the accent, of course) consecutively, bridging multiple words in those entries, with the reveal “deep” in the very bottom of the grid (67A: [French “state” that’s hidden in five answers]).

Filling in the first few entries that I inputted gave me a pretty good sense of how much I was going to enjoy the overall fill: REPO (1A: [Seized auto]) begot ONE-TIME (4D: [Former]) begot TIN EAR (32A: [Career killer for a violinist]) begot SUNSET AT SEA begot ALTHEA, which is a very timely entry given that Wimbledon is currently going on and she becoming the first African-American to win a Grand Slam title (1956 French Open women’s singles) as well as winning Wimbledon and the U.S. Open singles titles in both 1957 and 1958 (54A: Tennis legend Gibson, winner of 11 Grand Slam titles]). In ’56, Althea also won the French Open women’s doubles title with a Briton named Angela Buxton, who also has an amazing story that includes overcoming anti-Jewish sentiment as well as her family in South Africa (where she grew up) helping to raise a black person during apartheid. (I hope I’m remembering that story correctly.) Oh, and in 2015, I had the absolute honor of meeting the lovely Angela Buxton in the media room at the U.S. Open, as she was in town for a screening of a documentary made about the life of Althea Gibson. Undoubtedly, this moment was one of the highlights of my life as a sports journalist! 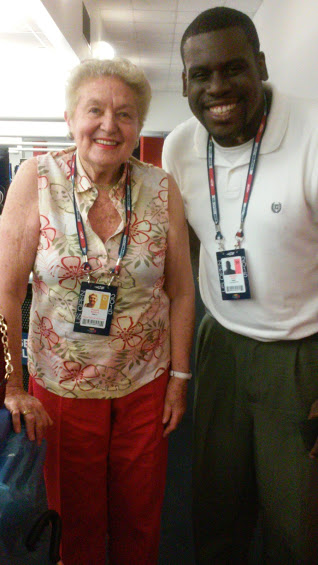 Ms. Buxton on the left, an awestruck Ade on the right.

Was completely annoyed that I did not know BRAGA off the top of my head and needed one of its crossings to finish the grid (31D: [Sonia of “Moon Over Parador”]). She initially came into my consciousness when I heard about Kiss of the Spider Woman a few times, but, for some reason, her name just keeps slipping in and out of my head. It shouldn’t. Yes, you had to deal with the unsightly NLER in the grid (27A: [Cub or Brave, for short]). There also was a partial that might have appeared to be yucky, but, through the power of sports, can become a real neat entry in a future puzzle. And that entry was…

“Sports will make you smarter” moment of the day: SAWA (36A: [“I ____ film today, oh boy” (Beatles song lyric)]) – In 2011, the Japan women’s national soccer team, captained by midfielder/soccer legend Homare SAWA, won the FIFA Women’s World Cup by defeating the heavily-favored United States Women’s National Team in the Final in Frankfurt, Germany. In that game, which went to added extra time after it finished 1-1 in regulation, it was Sawa who scored the tying goal to make it 2-2 with just three minutes remaining before the end of the 30 minutes of added time. (Abby Wambach of the U.S. had scored in the 104th minute to give the States a 2-1 lead, putting them 16 minutes away from winning the World Cup.) Japan eventually won the match on penalty kicks (3-1 in PKs) and it was Sawa, the 2011 FIFA Women’s World Player of the Year, who led the country to soccer’s ultimate prize.

Again, it has been a pleasure talking crosswords with you all! I hope to see you all here next week and, once again, keep solving!! 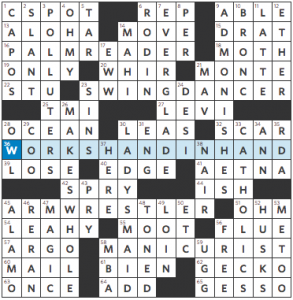 Hurrah for a theme where the wordplay is contingent on referential meaning rather than orthography. And it’s true! All those folks work mano a mano. I liked the long down fill in this grid a lot — you could write a sentence about someone who both ADMONISHES POLLUTERS and MAKES WHOLE CATHOLICS, like a priest who is also an environmental activist. Not sure that I buy [7d: Marshy track]: EVERGLADE as a singular noun; do we ever speak of one Everglade, all by its lonesome? Like a single Teton? (Those are usually found in pairs at least.) A LADY’S MAID is not someone I would expect to see in an EVERGLADE, even though they rhyme.

Remember the swing dancing revival of the late 1990s? Seems like there was swing dancing at every wedding I attended in those days, including my own. (Personal note: Today is my 19th Anniversary! Hi Andy! Love you! Not that you ever read this blog….) I can’t see SWING DANCER in a grid without thinking of this classic, which is now twenty years old. The ad used the original 1956 version of “Jump Jive an’ Wail” by Louis Prima; Brian Setzer covered the song and won a Grammy. I had forgotten that it also uses the “bullet time” special effect that was so important in The Matrix a year later. Papa’s in the icebox lookin’ for a can of ale … if he doesn’t find it, maybe he’ll eat the plums instead? 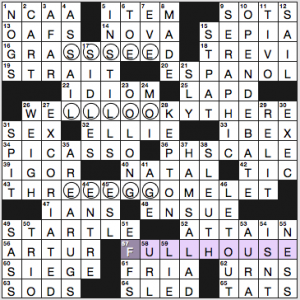 My brain is still melted from the sun and I need to do a better job of lurking in the dark. Probably this puzzle was easier than it felt to me. So! A short write-up. Theme is FULL HOUSE, the old sitcom whose title is also a poker hand evoked by the “three of one, two of another” letter strings in the other themers:

56a. [Concert pianist Rubinstein], ARTUR—that might be on the hard side for newbie solvers. SERAPHIC is a kind of high-end word, and EFFS referring to letter F’s isn’t too broadly familiar outside of crossword circles. But overall, the fill felt smooth.

37d. [Nonkosher deli offering], HAM SALAD. You guys!! It finally happened! I recently encountered actual ham salad for sale at a local Mariano’s grocery store. It looks incredibly gross. I hope not to see it again for another 50 years. 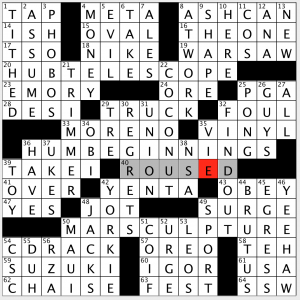 Matt has a slightly tricky theme this week. At least tricky to ME, since I boldly wrote in HUBBLE when the clue seemed to refer directly to the famous telescope:

There seems like there could be more of these, but I like that there are only three. Otherwise it could appear that the constructor is trying to hard or going for too much. And all of these seem humorous enough. This is a typical Jonesin’ that has plenty of fun stuff, including the usual obscure pop culture reference or two. And that is what counts! 4.5 stars this week. 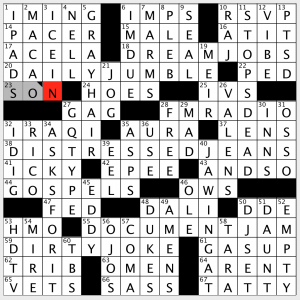 Bruce again! His constructing seems to be getting more prolific, which is a good thing since he makes awesome puzzles. This one has a cool revealer at 50D, although by that time even I had this theme figured out!

I wish I know how to work DJ software. Better yet, I wish I knew hot to mix and edit MP3s in order to make my own remixes. One of these days, perhaps. On a side note, I may have found my dream job. Close to home, smaller company, great culture. At least that is my assessment after two weeks! Hopefully the honeymoon can continue! 4.3 stars for Bruce’s DJ mix!