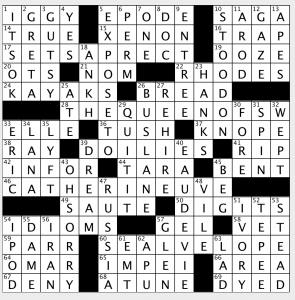 Good Monday morning, folks! Today I’m starting with an announcement–this will be my final WSJ Contest Puzzle commentary here at Crossword Fiend–co-reviewer Laura will be taking the helm from me beginning next week. I’m not going anywhere and you will likely find me back in this chair subbing for Laura in the future, but for now I’ll just be solving less publicly at home. And I hope you will enjoy her savvy commentaries as much as I do. So let’s do this thing, yes?

We’re in search of a famous literary work. Very obvious thematic material this week, we have four entries where the word EDEN has been removed:

So when it became clear that this was not a rebus puzzle and the same four letters were removed from each theme entry, I began to think about famous literary works with the word EDEN in them. John Steinbeck’s East of Eden was the first to come to mind. Could it be that these letters EDEN have moved “east” somehow, perhaps off the grid? Nah, that didn’t seem to jive with what was going on. Next idea came from thinking about the (clever, in hindsight) puzzle title, Fall Reading. When I think about the story of Adam & Eve, I’m reminded of the “fall” of humanity, when Adam took a bite of the apple from the Tree of Knowledge. (Would be great to grow one of these in our backyard–it would certainly come in handy in some of the more gnarlier metas I run across!)

So what work deals with this kind of “fall”? Well, Paradise Lost by John Milton came to mind, and indeed the more I thought about it, the more appropriate it felt as we have “lost” paradise (represented by the idyllic Garden of Eden in the story) with the removal of EDEN from these entries. Nice that the meta involved a bit of brainwork as our “work” (in this case, an epic poem as opposed to a novel) didn’t have the word EDEN in its title.

So fingers crossed I ended this run on a high note. Looking back at the fill, I wonder in retrospect if EPODE and SAGA are there intentionally? I enjoyed Amy Poehler’s recent autobiography but have only seen P&R once or twice, so my answer to knowing her character’s surname was KNOPE is nope indeed. Finally, I was impressed to learn that the architect I.M. PEI is now 101. May we all live as long.