This week’s regular AV Club puzzle is a metacontest; look for the writeup very late Sunday after the contest deadline. The review in this post is of the bonus puzzle. 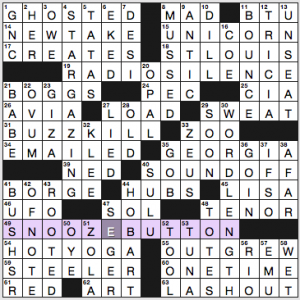 What an interesting theme! Three entirely unrelated phrases are tied together as descriptions of what you get when you hit the SNOOZE BUTTON on your alarm clock, 49a. [What a late sleeper may use … resulting in 19-, 31- and 40-Across?].

I was not at all seeing what the theme was till after the puzzle was done and I reread the 49a revealer clue and took another look at the other three themers. It’s always nice to be surprised (in a good way) by a crossword.

The fill is pretty good. It might be time for TRICIA to fade from constructors’ word lists, because the first name of a First Family member from 40+ years ago, with not much in the way of fresher TRICIAs to clue by, isn’t adding much value to a puzzle. On the plus side, there’s GHOSTED, UNICORN, HOT YOGA (I would never), STARGAZING (that was in another recent puzzle, no? still lovely), and WORD LENGTH with the tricky clue 30d. [Six for dinner?].

35d. [Great deal], GOB? I don’t know that the singular works with the “large amount” sense. If you’ve only got one GOB, it’s probably of something sticky or goopy.

The revealing answer today is PARAPHRASES in response to the clue at 61a [Puts in other words, or, if read as three pieces, a hint to the starred answers]. The three pieces are PA, RA, and PHRASES. To state it differently, we’re looking for two-word phrases whose first word starts PA and the second one starts RA. 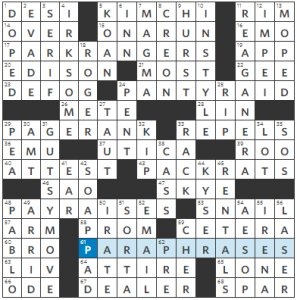 I didn’t get too excited about the theme, but it certainly did its job and gave me hints in areas that I needed it. For that reason, I was appreciative of it.

The long fill is mostly workmanlike with REAGAN ERA, IN STYLE, and SOAP PAD. But “GUTSY MOVE” adds some nice color.

What stands out the most though are the uncommon proper names. CREON [Antigone’s uncle] and HURST [“Imitation of Life” author Fannie] are side-by-side up top. Together they make that section difficult along with KOAN [Zen riddle] and MAGMA with its tough clue [Plutonic rock source]. I actually resisted MAGMA because I was at a planetarium today where we learned that Pluto has relatively few craters, volcanic or otherwise. But the clue has nothing to do with Pluto. Per Wikipedia, a pluton ” is a body of intrusive igneous rock (called a plutonic rock) that is crystallized from magma slowly cooling below the surface of the Earth.” So that’s two things I learned today.

An okayish theme with some uncommon fill. 3.2 stars. 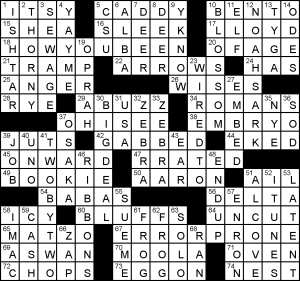 NOAHSARK and TWOBYTWO are the same length, and form a two part revealer for today’s theme. The TWOBYTWO phrasing is very strongly embedded in popular culture, yet the source material is more complicated( See Genesis 7 and Deuteronomy 14). Therefore, two ZEBRAS (uncloven hoof), two FROGS (no fins or scales), but 7/14 DEER… I suppose TWOBYTWO is a rough equivalent of “a male and its mate” though. FROG, ZEBRA, DEER are the randomest of random set of 3 animals you could possibly choose, though any more of that would crowd the theme out. The puzzle is 16 wide to accommodate paired central downs, which is a nice visual element.

I did enjoy several answers scattered throughout the puzzle: BENTO(box) feels fresh to crosswords, and answers like MATZO, ISHTAR (not continuing with a quasi-Babylonian theme), YAYME, BIGDEAL and YKNOW were all good choices. YKNOW was probably the trickiest answer in the puzzle, with that Y in particular a curveball. I had IKNOW for a long time, and with a mystery ?SU university (these are never a strong suit) that section was quite a challenge.

It’s Laura, subbing for Ben, who is at NPLCon in Milwaukee this week! The regular AV Club puzzle today is a metacontest from Francis Heaney; I’ll post my writeup of that on Sunday night after the deadline. But we also get a bonus themeless from Caleb Madison — so as not to deprive our readers of an AV Club review this fine day, here is a solution grid and a few thoughts about the entries that are related to music: 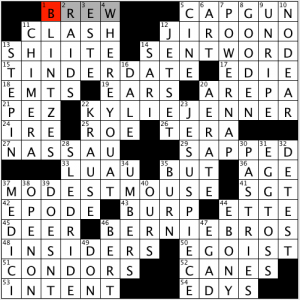