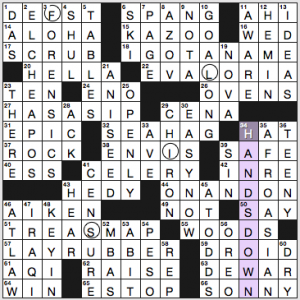 Sorry for the latish review this week! A quick rundown:

Joe DiPietro gives us a Thursday puzzle playing on the phrase HANDS DOWN [Easily … and a hint to four answers in this puzzle], which is our revealer at 34d. Four across entries contain a word that can precede “hand,” but those words are instead contained in an intersecting down entry. Like so:

A very cute idea, pretty well executed. An idea this ambitious imposes a ton of grid constraints (eight fairly evenly spread out themers, plus the HANDS DOWN revealer is a lot of theme material!), and with that in mind, the fill is shockingly smooth. Plus, there are some nice long non-thematic entries like I GOT A NAME and LAY RUBBER. A little ding for IRON HAND, which I’m still not entirely convinced is common, but overall I was impressed! I really enjoyed the aha, and I found this harder (in a good way!) than most recent Thursdays.

We have a puzzle in two halves today with H-donors on the left and H-donees on the right. 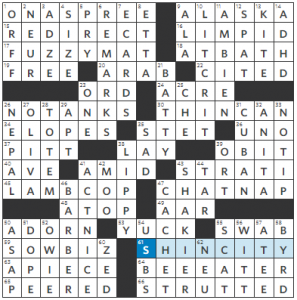 Strangely enough, I solved the entire right side of the grid first, and so I thought it was just a simple add-an-H theme. I was underwhelmed, especially considering I generally like the wordplay offered by this constructor. When I got SOW BIZ, the penny dropped.

One thing that is true is that the H follows the same letter in each pair of entries: a T in the first pair (although there’s an extra T in AT BAT), a T again in the second pair, a C in the third, and an S in the last. But other than a nice bit of consistency, what does that do for us?

And how to make sense of the title? You could re-parse it as “H over craft.” But what does that mean? Sure, the H is moved over, but where does “craft” come in? I looked at the letters between the H positions to see if there were vehicles in there, but no. I guess “craft” is just meant to imply something that is built or created. Thus the puzzle is an “H-over craft.” Meh, seems iffy, but that’s the best I got. Solvers, if you have something better, feel free to shout it out.

The long fill in the grid is relegated to the NW and SE corners with stacked 8s. I like REDIRECT with its clue [Cross follow-up] (I was thinking boxing, not law) and BEE-EATER, though its generic clue [Insectivorous bird] could apply to most birds. I also like LIT CRIT, but its symmetric partner, ACT NICE, doesn’t strike me as something most parents say. (“Be nice” seems more common to me.)

Unusual theme that still has me wondering. Maybe I’m over-thinking it. Anyway, a solid grid despite some gluey bits here and there. 3.6 stars from me.

I didn’t feel well last evening. That’s my story for both the long solving time and my inability to grok the theme. Thanks to my Fiend teammates for helping me out with the latter.

Each theme answer is a wacky answer to a wacky question, which can then be re-parsed to give us three of a kind. 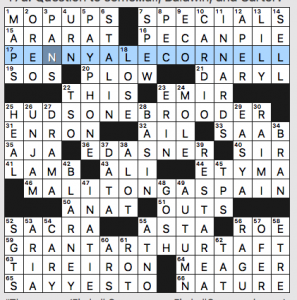 I have to say that even leaving aside my annoyance at the last clue/answer set, I am underwhelmed by this theme. It was less of an “aha” moment than a “is that all?”

What I didn’t know before I did this puzzle: that OREO and Cadbury have the same parent company. 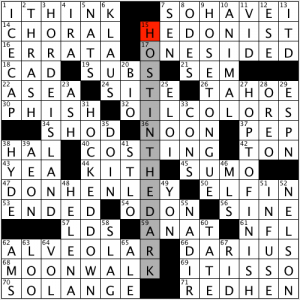 The title does not refer to the 31st President of the United States, immortalized in the Broadway musical Annie, but to the movement of the letters H and O in each vertical theme entry — from wherever they are in the base phrases, they rise to the top; namely, H-O, over.

Random association: A Shot in the Dark (1964) is the second Pink Panther film, directed by Blake Edwards and starring Peter Sellers as Inspector Clouseau and frequent crossword denizen ELKE Sommer as his love interest-slash-murder-suspect. As a kid I had only ever seen the Pink Panther cartoons, which were at bottom a thinly disguised Road Runner knock-off (with “The Inspector” in the role of Wile E. Coyote), so imagine my dismay when I was taken to see Return of the Pink Panther (1975) as a very tiny child and there was a cartoon pink panther only in the credits.

Randomer association: There have several LGBTQ advocacy and civilian patrol groups that have been sued by MGM for using the name “Pink Panthers.” 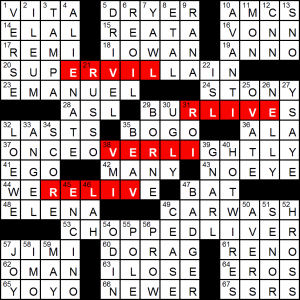 CHOPPEDLIVER is interpreted to mean the letters LIVER are scrambled and buried somewhere in four other phrases: SUPERVILLAIN, BURLIVES, ONCEOVERLIGHTLY (can’t say that’s familiar; it’s in the dictionary?), and WERELIVE.

The design, with a 12-letter revealer meaning there is only a row gap between each of five themers, and a grid-spanning central 15, is under a huge amount of strain. NOEYE is one of the more desperate partial answers I’ve seen. YSAYE is not going to be familiar to many, but in isolation wouldn’t bug me.

On the other hand, there is no valid reason the top-right is filled like it is. AVANTI was forced by ???N?I and the fact so many other answers cross two or more themers. It’s a foreign word that is also the title of a flop comedy film in the 70’s. But that 4×3 area could be filled by just about anything, so why go with three abbreviations down, one across, a difficult name, and a bit of Latin that is typically encountered as part of a longer phrase. My first pass was AHOY/VINE/AMEN.

If I were running a puzzle with this theme, I’d have sent the grid back asking for something cleaner, and if necessary a different set of theme answers that were more amenable to an acceptable grid.