If we have [1a: Maze word]: START, logic suggests that somewhere else there’s another: [63a: Maze word] at the END. In between, whaddaya bet there’s a word maze? 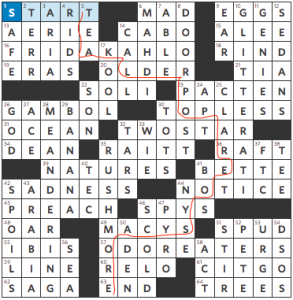 But what could we be looking for to make said maze? Let’s solve the grid to find out. It’s not a tremendously tough one, and we’ve got some nice fill like:

We even get a hint, in the last across entry: [64a: Wood sources]: TREES. We know it’s a hint because the puzzle’s title is “Wood Winds,” and on the syllabus for Metapuzzle 101 is: Investigate any coincidences. It’s a maze, we’re looking for trees … oh! wood winds, like they wind around, like in a maze. Starting from the T in START (let’s start at the very beginning), we find:

Next on the syllabus for Metapuzzle 101: If you have a bunch of things suggested by the puzzle, put them in a list. The first letters of the winding woods spell:

— which is “a form that some music takes,” and our answer. A few months ago I was sorting some stuff in the basement and I found a box of old mixtapes (hey, basement tapes!) from college and grad school. The only tape player in my life anymore is in my car (a 2000 Camry with many dings and rusty spots). For a week I drove around listening to the soundtrack of my youth. It was, as we used to say, awesome.

Let’s take a moment to thank Dave for many years of fine WSJ Contest coverage; I have learned so much as a solver from his metapuzzle writeups (and from those of other Fiend colleagues). I’ll be handling the WSJ Contest for the foreseeable future! Looking forward to solving with all of you. I can’t promise I’ll always get the right answer, but I hope we’ll have some fun figuring stuff out.