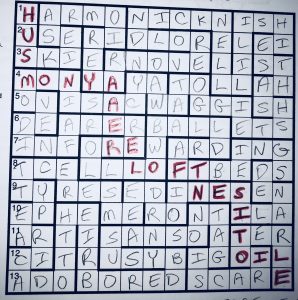 Wow. I will try to do this writeup justice — I’m covering for Ben, who is wrapping up NPLCon in Milwaukee; just my luck that this week’s AV Club was a metacontest!

First, you’re getting a penciled-in grid solution, direct from my artisanal wooden clipboard, because this baby cannot be solved in Across Lite.

The puzzle in Across Lite, on my friend Rich’s phone. Don’t try this at home, kids.

Second, the grid itself solved much like a Marching Bands, which is a superfun variety puzzle type that you can get from various outlets, such as BEQ, Outside the Box (a.k.a. Joon), and Games magazine. Namely, instead of Across and Down, you get Rows, with two entries per row, and a Maze Path, where you get numbered clues for entries, but you have to figure out where they begin, and how long they are.

I solved the grid. That was fun enough! In no way was this an [10.1: Single transient item (as opposed to the much more common plural form): EPHEMERON.

But wait, there’s more! Per the instructions:

Unfortunately for the makers of this maze, there is also someone who has decided to find a quicker way from the beginning to the end: the Maze Ruiner. That person has found a way to pass through the walls (leaving some obvious evidence behind) and forge a much shorter path to the exit. Clues for the MAZE RUINER’S PATH are also given. When you’ve found the Maze Ruiner’s path, examine the evidence left behind to figure out what will be needed to repair the maze.

Here are the clues for the Maze Ruiner’s Path, and my initial ideas of what the entries might be:

Next I tried to find a path in the grid that would get me from the H starting square to the E ending square. I found HUS and MONY … but there are some letters missing. Wait, if I keep going, each entry seems to have some letters missing — and weren’t we told that the Maze Ruiner had been “leaving some obvious evidence behind” in making their path? Following the syllabus of Metasolving 101, I listed the evidence left behind, i.e. the letters missing from the words in the Maze Ruiner’s path, highlighted here (and the full path is overwritten in red pencil above in the solution image): 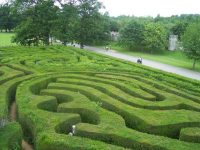 HUSH MONEY, ADAGE, REEL OFF, TUNES INTO, IDLE: HEDGE FUND, which is what’s needed to repair the maze. Because a hedge maze, as Wikipedia reminds us, is “an outdoor garden maze or labyrinth in which the ‘walls’ or dividers between passages are made of vertical hedges.” So if someone ruins your hedge maze, you’d likely need a hedge fund to repair it.

As Harry Potter, who negotiated a hedge maze in the final challenge of the Tri-Wizard Tournament (Goblet of Fire), might say: Pure dead brilliant! I thought this was a fantastically fun and challenging solving experience. What did you think?