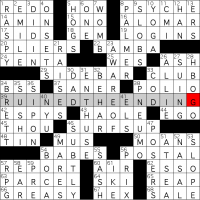 hello and welcome to episode #528 of matt gaffney’s weekly crossword contest, “Shhhh!”. for this week 2 puzzle, matt challenges us to name a two-word phrase. what are the theme answers? well, there’s only one overt theme answer, and one other that’s explicitly not a theme answer. starting with the first one: the grid-spanning central across answer is {Said too much in a movie theater, maybe — like someone did twelve times here} RUINED THE ENDING. okay. well, what does that mean?

my first thought was that we could change a letter coming at the end of both an across and a down to get a new valid fill there. and indeed, there exactly twelve such squares, which had me fooled for a bit. and in some of them, you can do just this—for example, where BAMBA crosses YOGA, you could make it BAMBI/YOGI. but what about that other answer—the not-theme answer? 41d is {Golf course designer Ernie (ignore this one!)} ELS. that is not one of the answers ending in one of those squares, because the S crosses the 5th letter of SURF’S UP.

however, BAMBI had me onto something, because BAMBI is a movie. after that i quickly found more of them, enough to spell OILERAE, and from there i was able to intuit the answer and find the missing theme entries. there are, in fact, 12 of them, all reading across. from top to bottom in the grid, they are:

all 12 of these are symmetrically placed, and they’re all across answers, so there’s an entirely valid reason for ELS -> ELF (2003) not to be counted as one of them, but that was a useful hint nonetheless. here’s a screencap with all of the changed letters: 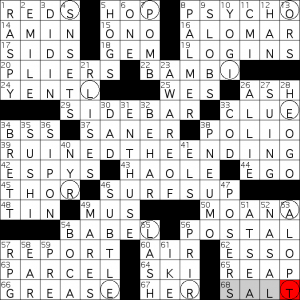 reading them off from top to bottom, you get SPOILER ALERT, which is a perfect answer phrase for this mechanism of “ruining” movie endings.

this is one of my favorite metas of the year, maybe ever. starting with a really nice idea to reinterpret “ruin the ending”, elegant and super-clean execution on the meta mechanism, and leading to a couldn’t-be-more-appropriate final answer. it felt tough for a week 2, but i didn’t mind that at all. five stars.