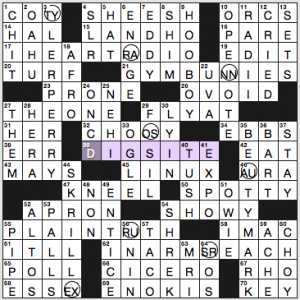 Hello! What’s this? A rebus puzzle sneaking from Thursday to the Wednesday slot? I approve fully. We’ve got an archaeological DIG SITE in the center of the grid, and 8 rebus squares (not symmetrically placed) each contain 2 letters. Taken together, the rebus letter pairs spell TYRANNOSAURUS REX. (Addendum: There’s also 29d. [What each circled square in this puzzle represents], FOSSIL.)

That’s the only thematic material, a 7 and a bunch of rebuses peppering the grid (… right?), so David’s included plenty of showy fill, much of involving those rebus squares. My faves:

4.5 stars from me. FLY AT is really the only think I can ding this puzzle for.

A rather literal title since the theme entries don’t have any words in their clues, just a simple “?”. Sometimes, when the constructor doesn’t want to give too much away, you might see a clue with just a hyphen, so I wondered if that was what was going on here.

But that’s not exactly the case. The “?” is perfectly apt because each theme answer is a synonymous phrase meaning “Huh?” 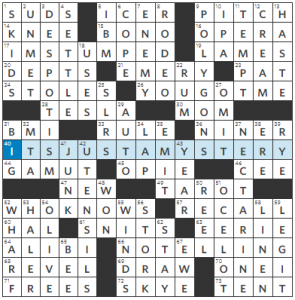 A good set, but IT’S JUST A MYSTERY sounds a little out there. Obviously it was chosen for its grid-spanning feature, but I feel like IT’S A MYSTERY is slightly more in-the-language. I typed “It’s just a” into a Google search box, and the predictive typing came back with, in this order, “…prank bro,” “…flesh wound,” “…matter of time,” “…ride,” and “…step to the left.”

So that one seemed off, but I’m impressed at this set for all its synonymous phrases yet having no duplications, not even little words like “no” or “it.” Nicely done.

The rest of the grid felt average-to-nice with NECTARINE being my favorite entry. I much prefer the crispness of that fruit over the oft-mushy peach. For you math nerds, there’s POLYGONS, and for you fans of BFFs Putin and Trump, there’s DESPOTISM.

That’s all I got. Tidy little puzzle with a cute theme. 3.5 stars from me. 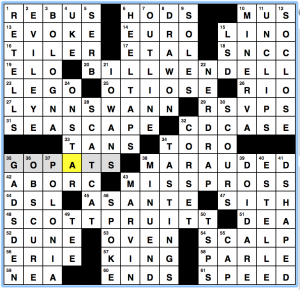 Happy Wednesday, y’all.  It’s mid-July and I’m clearing out the Vacation Brain cobwebs after driving across MN and WI last week, but this week’s AVCX from Byron Walden and I were not on the same wavelength at all.  I think I see what’s going on in Butt Doubles, but it’s also possible I missed something extra.  Let’s take a look at the grid.:

The “Butt Doubles” of the title seems to be referring to the way the end of each word in the theme clues shares the same double letter – I’m not seeing anything else spelled out there (“Ah, yes, LNST, of course!  That chestnut.”).  Feel free to tell me I am wrong in today’s comments.

I stopped by the House on the Rock while on vacation last week and as far as I’m concerned, it’s a must-see for everyone.

The fill on this one was just this side of frustrating/obscure for me.  I’ve never heard of HODS before (and HEELTAPS as the crossing for that lead letter didn’t help), and OTIOSE was nowhere my mental thesaurus for “futile”.  I also wasn’t crazy about A B OR C or D-SHAPED.  I did like “Jewel box?” as clue for CD CASE, and 9 years (and counting!) in Boston made GO PATS spring to mind immediately.

It might not have been my week, fill-wise, but this was still pretty solidly constructed. 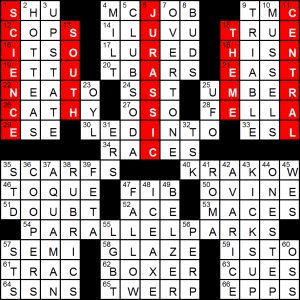 PARALLELPARKS as a revealer gives me flashbacks. Even though I passed my driver’s first time, I will happily park kilometres away at a McDonald’s to avoid the tension of parallel parking. The puzzle theme looks might complicated, but it’s not. Just add PARK to the end of SCIENCE, SOUTH, JURASSIC, THEME and CENTRAL and you get phrases. I think it’s a sign of current events overload that I wanted 13D to be Deep STATE before SOUTH. It bears noting that a STATEPARK is also a thing – “___ Park” has many, many options.

It seems deliberate that they’re all (roughly) in the top half of the grid, but if some were moved to the bottom their parallelness would not have been affected. The design choice led to what was for me a very stifling grid design, with six mini-puzzles and little flow between them.