What I didn’t know before I did this puzzle: pretty much everything mentioned in the theme answers. An original theme and a very straightforward puzzle that played a little bit easy for a Wednesday, perhaps because the theme answers are not inferable without crossings.

1a tells us we’re in for something a little different: 1a [With 27-, 49- and 66-Across, phrase applicable to five innovations in this puzzle (as suggested by the starred clues)] So we have five theme answers in addition to the four entries mentioned in 1a. That’s a lot of theme material for a daily puzzle.

The theme answers are all new ideas or inventions, as promised: 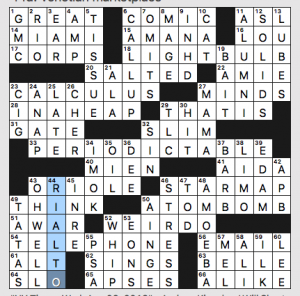 The phrase described in 1a turns out to be GREAT MINDS THINK ALIKE. I figured that out as soon as I got MINDS at 27a. It would have been more fun if those four words had been clued without reference to the theme until 66a, ALIKE. It would have made the puzzle a smidgen easier, but still Wednesdayish. I still liked the puzzle. The fill is remarkably decent given the absurd amount of theme material

I suppose it’s not surprising that all but one of these stories involves a dispute or controversy over who should get credit. The exception is the Manhattan Project.

That’s the most research I have ever done for a blog post, and I know I only scratched the surface. Feel free to elaborate on any of those stories in the comments. And that’s it for tonight!

Theme: Animal homonyms in the following form: “animal THE x.” 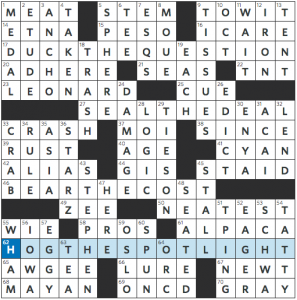 I’ll be honest, this seems like a Monday-level theme, and if it was running then, I probably wouldn’t have a problem with it.

But by Wednesday I would hope to see something with more interesting wordplay than phrases whose first word is a homonym of an animal. This feels like a well-worn trope in crosswords, and I expected to see numerous iterations of it in the cruciverb database.

But I didn’t. I only found one case from the New York Sun in 2006 where the phrases had this exact form. The two puzzles share BEAR THE COST and SEAL THE DEAL but the older one also had BADGER THE WITNESS (nice, but 16 letters long) and WHALE THE TAR OUT OF (ick!).

So really, since this theme hasn’t appeared in any major publication (as far as I can tell from looking at cruciverb) and since the two grid-spanners appear to be cruciverb.com debuts, I have to look at this in a new light. It’s solid, clean, and evocative. In other words, nice! (But I can still wish it ran on an earlier day.)

It’s curious that there aren’t any fill entries longer than seven letters. Demands by the theme don’t seem exorbitant, so I wonder if there’s a different grid structure that could’ve allowed for some shinier fill. On the other hand, the less-constrained shorter fill might have been more fitting for a Monday puzzle. 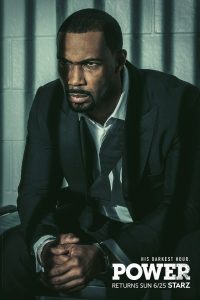 Still, there are a couple bits of crosswordese that triggered the grumble-meter: plural ESQS and MOUE which I’ve only ever seen in crosswords. And I wonder if the STARZ / ZEE crossing gave anyone any trouble. The first is clued [“Power” network] and the latter [Don Diego de la Vega’s trademark]. If you didn’t recognize the TV show, as I didn’t, nor make the connection to Zorro (which I thankfully did), you might have been Naticked there.

My d’oh! moment: I only just now got the clue for STEPHEN: [King with a macabre bent]. I was thinking all along there was some King Stephen I didn’t know about who enjoyed torture. No, it’s author STEPHEN King (who may or may not enjoy torture).

That’s all I’ve got. Not the most exciting of themes, but it might be a good one to hand to someone branching out from early week grids. 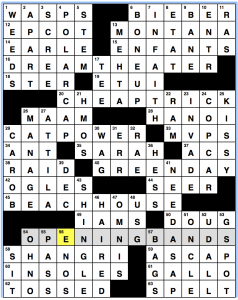 It’s BEQ week at the AVCX, so let’s get down to business and solve the puzzle.

“Acts First” is a little clunky as far as titles go for this sort of thing, but it does encapsulate what’s happening in each theme entry:

It’s a cute theme, and if you’re musically-minded like I am, this one fell pretty easily.

Please come hang out with me in the latest BEACH HOUSE album, it’s lovely, as is all their work.

The rest of the fill here was fine.  Question for you: what’s the worst opening band you’ve ever seen?  For me it was some local act that opened for The Noisettes back in 2009 – it was a promo show (and free!), but the opener had no connection to the retro-tinged stuff that the group we were there to see specialized in. 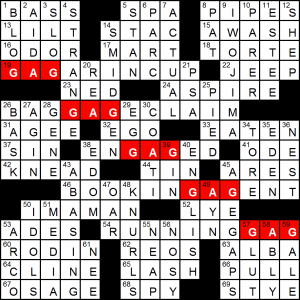 This is a version of an infrequently seen theme type. A notable example was by I think Peter Gordon, and featured A MAN walking down stairs. Today it’s a RUNNINGGAG with GAG running from left to right as the theme answers move downwards. GAGARINCUP is a fairly obscure answer, which the clue acknowledges by giving us a push with [astronaut]. However, it’s an interesting answer, with the KHL being a Western Hemisphere rival to the NHL. Difficult answers in moderation enhance a puzzle in my book.