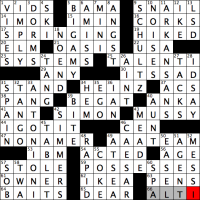 hello and welcome to episode #531 of matt gaffney’s weekly crossword contest, “Friend of Rin Tin Tin”. for this week 1 puzzle, matt challenges us to name a breed of dog. okay. what are the theme answers? there aren’t any especially long answers in the grid, but there are four 9s:

what do these have in common? well, in addition to being nine letters, the middle three letters are the same as the last three: SPR(ING)(ING), POS(SES)(SES), ARK(ANS)(ANS), and ANT(ONI)(ONI). this matches rin tin tin, from the title, so that pretty much has to be it. is there a dog breed that fits the same pattern? why yes, the chihuahua. so that must be it.

note that none of the four theme answers could code for CHIHUAHUA in a cryptogram (because the H appears as the 2nd letter in addition to the 4th and 7th)—nor could any of them code for any of the others. still, the letter pattern was fairly apparent, and there aren’t a great many other entries that fit this pattern. there are several other ___INGING words, but it’s best to have only one of those. also a handful of ___GINGIN entries, like BARGING IN or LOGGING IN. and there’s one other canine-adjacent one in my word list, in addition to RIN TIN TIN and CHIHUAHUA. anybody want to guess? i’ll give you candy.

the crossword itself was tougher than usual for a week 1, i thought. some of the sticky bits: