Jim P. here in lieu of Amy. I don’t usually cover the Friday NYT beat, but I’ll do my best. 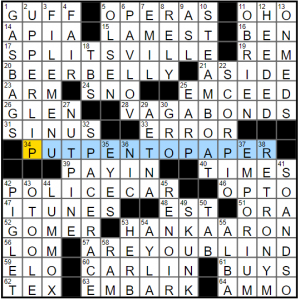 Lucky for me, Damon (who goes by Joe Pancake in the comments on this site), handed me a doozy of a grid to work with. Lots of goodies here! I’m really diggin’ SPLITSVILLE, BEER BELLY, VAGABONDS, PUT PEN TO PAPER, POLICE CAR, HANK AARON, “ARE YOU BLIND?”, STEAMBOAT, SCORPIO, GASBAGS, SPACE RACE, EMPORIUM, “SO AND SO,” PIGLET, and LUMMOX. Whew! That’s outstanding fill! Oh, and CARLIN and PAVLOV. Very nice!

UPPER LIP feels like a partial without the “stiff,” though it’s in the clue [Something that may be stiff]. And I figured that [It might include “New Folder” and “Close Window”] wanted something MENU, but I tried EDIT before getting FILE from the crosses.

All this great fill is countered by the usual crosswordesey suspects such as APIA, OPTO, ORA, LOM, GRO, and AYLA. So there’s a real dichotomy here between that stellar stuff and this old kludgy stuff. But at the end of the puzzle, the sheer magnitude of great fill overwhelmed the gluey bits.

GUFF [Insolent talk] is a great starter to the grid, but who else put SASS there? Come on, I’m sure I’m not the only one. That made that upper corner tough and it was a long time before I could see GASBAG (1d, [Wind sources]).

Interesting to see BEER BELLY (20a, [It’s no six-pack, ironically]) here. According to Alex Eaton-Salners’s constructor notes on Tuesday, that was his original intended revealer for the puzzle that ended up using BEER INGREDIENTS. And RETRONYM [“Rotary phone,” for one] is also interesting.  Wikipedia calls these “terms renamed after something similar but newer has come into being.” Can you think of some other examples? The Wikipedia list includes “cloth diaper” and “Classic Doctor Who” (as opposed to NuWho).

Some trite crosswordese bits hold the grid together, but good gravy, there’s a lot of good fill here. 4.5 stars from me. 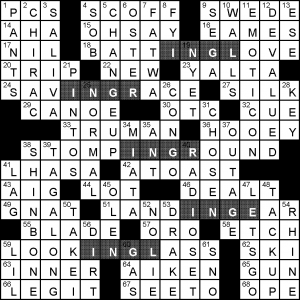 A theme that’s easier to grok than to explain. Two part phrases are made up of an initial -ING phrase followed by a G word. The G disappears, and wackiness ensues. Most of it lands, though strangely, I found the finale, LOOKINGLASS, the weakest of the set.

I’m not sure if I am the only one, but I really struggled for traction at the top of the puzzle. I ended up regrouping at the bottom and working my way up.

A few more: [Words spoken with one’s hand raised], ATOAST – tricky because if you find AT you assume that’s a word. [Pulitzer poet Conrad __], AIKEN – name that appeared via crosses; I actually think it has appeared in a puzzle with my name on it, but in Brad Wilber’s section. [Email adornment], EMOTICON. That’s a thing? [Longboat in Florida, e.g.], KEY I do believe we have a roving blogger in that vicinity (broadly). [Cause of a blinking “12:00”], OUTAGE – we have a prepaid metre, and not infrequently let it expire simply because it doesn’t like to tell us how much power we have. [Emulate a little brother, maybe], TAGALONG – I resemble this remark; used to freak my mother out by hanging around my older brothers’ dnd games (dens of 20-sided iniquity!)