Amy is on a plane returning from vacation, so her F(r)iends continue to cover. 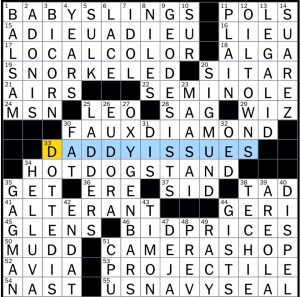 I’m gonna ramble at ya for a bit, themelessly. Not much stumped me this Saturday, although I found the NE the toughest to grok. Just couldn’t see OIL TOWNS for [12d: Houston and Dallas, historically] — wanted NFL TOWNS or something equally ridonkulous. Nice stagger stack in the center, though I wasn’t associating Blarney in [30a: Blarney stone?] necessarily with FAUX — Wiktionary tells me it means something more like “mindless chatter.” So that makes at least two compound nouns where I knew the second term but not the first. Also, what’s up with appending US to NAVY SEAL? Do other countries’ navies have seals? I am the very model of a modern major pinniped! Seems redundant, but I spose it gives the needed length to round out that triple stack in the SE.

Q: What did the Buddhist monk say at the [34a: Simple business, frankly speaking?]: HOT DOG STAND?
A: “Make me one with everything.”

Was it Friedrich or Kurt who sang [15a: Repetitive farewell from “The Sound of Music”]: ADIEU ADIEU to yieu and yieu and yieu? The Von Trapp family settled in Vermont, not far from me (or from Fiend colleague Dave) and have for many years run a beautiful ski lodge near Stowe. You can eat dinner there and order schnitzel with noodles as you enjoy the LOCAL COLOR. They even brew a HELLUVA excellent beer.

You know what really brings out the Sanctimommies? [1a: Alternatives to strollers]: BABY SLINGS. Show up at your baby group with an old fashioned Baby Bjorn or with your kid in its car seat because that’s the only place she’d sleep for like months or whatever, and you’ll hear a lecture from people who don’t have anything better to do with their time than tell you what you should be doing with your life and your baby. You’d think anyone not wearing an organic woven boba kango blahblah hoppa doodoo is setting the kid up for MOMMY and DADDY ISSUES for life.

Genderwatch: Look, I’ve written comedy and as if I’m a [35d: Comedian]: GAG MAN. Sure, treading the boards on ye olde vaudeville circuit, or, say, Johnny Carson had a guy, probably, who wrote shit for him. One of two women of the female gender in this grid is [26d: Author Welty]: EUDORA, who was also the namesake of an email client developed by a TECHIE at the University of Illinois in the late 1980s (apparently she was flattered). The other, [44a: Former Spice Girl Halliwell]: GERI was, as Ginger Spice, the only Spice named after an actual spice. (If we start a tribute band called the Herb Girls, I’ll be Bay Leaf — laurus nobilis.) Appropriately enough, we’ve got [33a: Problems resulting from a poor paternal relationship]: DADDY ISSUES crossing [20d: First name in psychoanalysis]: SIGMUND, who had a lot to say on the topic. As a child of two psychologists, I’d argue that DADDY ISSUES might arise from an unresolved or complicated paternal relationship rather than a “poor” one. Here’s Queen Bey working out some DADDY ISSUES with the Dixie Chicks: 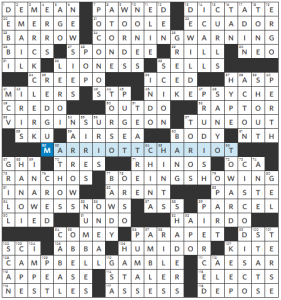 I am currently on holiday, and frankly, want to be away from my computer. Unfortunately for me, no one else was able to cover this puzzle, so this will have to do.

The theme is fairly standard. Nothing too exciting, but nothing off-kilter. 3.3 stars.

Your word of the day is NUMBLES (85d, [Edible entrails, as of deer]). Discuss. 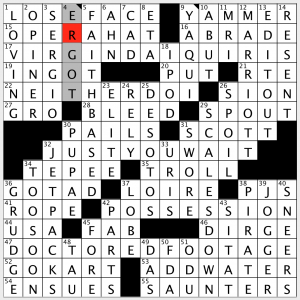 I think I am getting tired. Almost ten minutes to solve this one! Our good buddy Samuel Donaldson has today’s LAT, and I struggled with this one. I think I need to go on a trip! Next weekend, I plan on visiting family in Kentucky, so it will be a nice weekend getaway to hopefully at least partially recharge the batteries.

But I digress: Sam has made a great puzzle. 68 words in a wide open grid; no wonder it played slightly tough! I try and pay attention to word count on Saturdays, and the count has been 70 or 72 in recent weeks. A solid 4.7 stars today for a gem.

Have a wonderful Saturday! 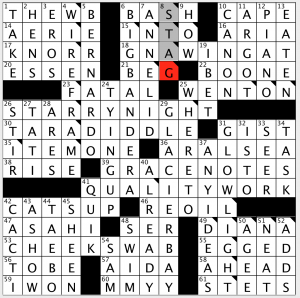 I am now hoping these live solves on Twitch using downs only are a regular thing. I have not heard if there is one this weekend, but I will be scouring Twitter to see if I can find out. Or I can just ask Erik Agard; he should know! I thought last week would give Andy Kravis fits, but he put on a solving clinic that, if you can find the video of, you NEED to watch.

I would think a downs only solve on this Longo puzzle would ALSO cause major fits. But maybe it only caused ME major fits! If you hear of a live solve of this puzzle, please let ME know! Yes, this took me a full 30 minutes, and you see all of the second-guessing marks in the grid! Another great Longo gem, this one is. 4.8 stars.

Some of my memories:

Whew! What a puzzle!