Title: “Triple Play”
Prompt: The meta for this puzzle is a famous album.
Answer: “The Last Waltz” by the Band et al. 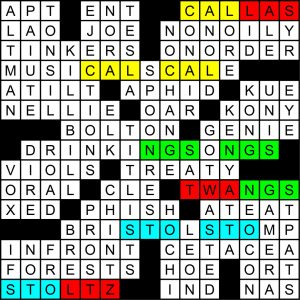 I’ve been nagging Pete for a tough one all year, and this one is definitely the toughest of 2018 thus far. I’d solved the puzzle on Friday without having time to look at the meta, but then lost the sheet of paper I’d solved it on so had to redo it this evening. Glancing at the scoreboard I saw that just 116 people had gotten it, which means this was certainly a missable meta. With my perfect year on the line, I went to work.

Typical Muller grid, wide-open and full of nice long fill (KILL BILL, KENYATTA, GOT WASTED, SPOON REST, ALTMAN, NO CHANGE, BOLTON) despite the presence of what appear to be (and indeed turned out to be) long theme entries. That’s a tricky combination for the solver because it’s hard to tell what’s theme and what’s not. In fact I was unable to solve the bottom-right; was not familiar with BRISTOL STOMP but was able to puzzle it out letter-by-letter. GAMERA at 42-D I’ve never heard of and wasn’t so lucky on, since I stupidly had ST PETE instead of the correct and obvious ST. PATS for [Manhattan cathedral, familiarly]. And then I couldn’t place NAS so had NAE there. Oh well. Eventually I Googled my way to finishing the corner.

Scanning the long entries I noticed the CAL/CAL echo in MUSICAL SCALE, and then the STO/STO echo in BRISTOL STOMP. But then was surprised to find no repeated trigram in DRINKING SONGS. Curious — I double- and triple-checked that there was no repeated -ING or -INK string, but there wasn’t. Hmmm. So then I noticed KILL BILL at 17-D and looked for another -ILL string, but no luck, and even if there had been that would’ve been a weird place to hide the third one.

Did anyone else have this problem? 6-7 burned minutes later I realized that NGS is the repeated trigram in DRINKING SONGS. Was this tough for others to see? The full stop threw me. Anyway, each of these three appears elsewhere in the grid: CAL in CALLAS in the upper right, STO in STOLTZ in its twin in the lower left, and NGS in TWANGS. Its twin is NELLIE in the grid, so I dutifully began brainstorming/list-combing for a famous album in whose name the letters LIE appear twice.

Hmm, there wasn’t one. Odd. Nothing in the Rolling Stone top 500. Nothing in the Grammy nominations. Nothing with a title like “Don’t Believe the Lies” or anything else plausible I could dream up. And would Pete really send us on a list-comb like this, armed only with “a famous album”? No, it had to be something else.

I’m often puzzled/amused when solvers tell me on one of my metas that they’d been extremely close at one point but had failed to spend 5 seconds following up on the lead that wound up being correct. How come people don’t just spend the 5 seconds, I’ve wondered to myself? And then I do it too, which is what happened here. Early on I’d seen the leftover letters of LAS and LTZ from CALLAS and STOLTZ, and noted briefly that “Waltz” ends with those three letters. But it seemed irrelevant, so instead of spending 5 seconds on “What could LAS something LTZ mean?” and getting it right away thru a quick backsolve for the missing TWA, I dismissed it as irrelevent and went looking for albums with titles like “Alien Belieber” or “The Hollies’ Lies.”

So after realizing Pete probably wasn’t sending us on that kind of search, I took another look at the grid and LAS/TWA/LTZ popped out right away. So easy to get lost in the crazy during a meta hunt.

I liked this meta a lot. It’s intricate without being overly complex, and each step is logical and obvious only in hindsight. And note the amusing final touch — “The Last Waltz” is — wait for it — a triple-album! That’s finishing things with a flourish.

4.60 stars, very nice. And I’m 8-for-8! But soon the bright summer will give way to the predator-filled darkness of autumn…and scary metas will likely emerge…I’ll see you back here soon for the next one!