I love Lynn Lempel’s puzzles. Her Monday puzzles are smooth and fun to solve as well as accessible to new solvers. This one played a little harder than an average Monday for me, but that may be because it’s Sunday night, I’m on call, and we just finished a party with four of Emma’s preschool friends to send them off to college. Erp. 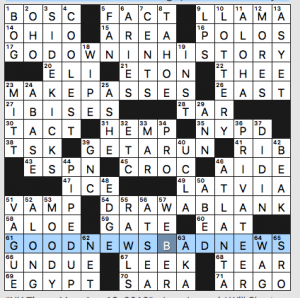 I liked this theme despite my raised eyebrow at 23a.

What I didn’t know before I did this puzzle: see above re: the album “Music” and the PRIVATEER.

Jim Q standing in for Jim P. So mind your P’s and Q’s. Has that joke been made yet? Probably.

This puzzle served as a reminder that I must see to the mountain of laundry piling up near my front loader. I ran out of detergent about a week ago. 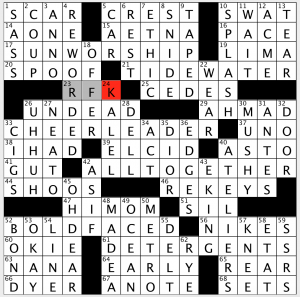 17a. [Aztec practice] SUN WORSHIP. I didn’t know this was a practice… and I’m not entirely sure I’ve heard of Sun detergent.

21a. [Coastal region of Virginia] TIDE WATER. Is the “Tide Pod” eating craze still a thing? I hope not. 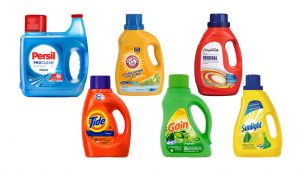 See? Don’t they all look pretty much the same?

It’s hard to say whether or not all these brands are familiar. I use Purex (usually on sale 10 Gallons/$1 or something like that). But the different brands sort of blend together in the detergent aisle at my grocery store. It’s as if all the detergent makers got together and decided to use the same color palette and fonts in their packaging. Here’s a list of top sellers from a quick Google search.  Looks like only All and Tide made the cut from this puzzle. I’m a bit surprised Gain wasn’t included in the grid.

The puzzle is clean overall I thought (it’d better be… there’s plenty of detergent in it). I’m always impressed when themers are stacked on one another and the result is devoid of gunk.

I got inexplicably hung up in the NE when I entered TROT for [Horse’s gait] and refused to change it. Instead I shoehorned A ONE in for [Pinnacle] instead of ACME and foolishly erased LIMA as the capital of Peru (I dunno. Figured the clue wanted some kind of currency instead). My normal Monday time is about 4 minutes and this took me 5. Seriously, 20% of my time was spent in that corner cursing my own idiocy.

The one clue I was going to question was [Cheesy talk] for SASS. But just now I’m realizing that I misread the clue. [Cheeky talk] works much better [Facepalm]. What can I say? I woke up late and I’m groggy.

I love this crossword series. It’s great to have a good chewy themeless on a Monday – especially a Monday that’s as dreary as this one is. Rain, rain, go away. Or go to California, where they really need you.

I was surprised to see my time when I finished. It felt like longer than that, in part because the NW was the last to fall. The only answer I put in on my first pass was HAUT for 2d [High up on the Eiffel Tower] and I took that out and put it back a couple of times. It was correct, in the end.

There are four stacks of 11-letter words anchoring this puzzle, and they’re all terrific. In the NW we have the ones that stumped me: 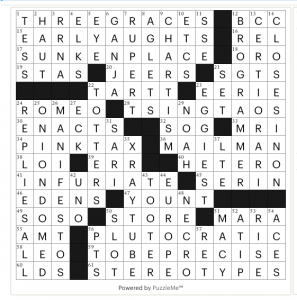 Highlights of the NE:

We continue the Email theme in the SW:

And in the SE:

I also liked PINK TAX for [The cost of being a female consumer]. My husband and I have identical blazers from our alma mater. They are almost the same size and are constructed in precisely the same way. It costs $10.00 more to have mine dry-cleaned because it’s a woman’s jacket.

What I didn’t know before I did this puzzle: I hadn’t heard of either Valerie Solanas or Donna Haraway, and thanks to Anna and the crew at The New Yorker for educating me. 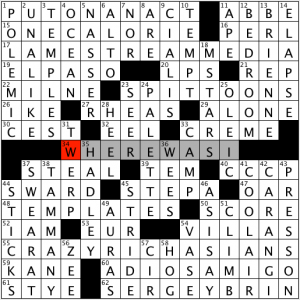 [34a: Phrase said after trailing off]: WHERE WAS I? Oh right … writing a blog post. [45a: Instruction beginning]: STEP A: Post the solution grid. Step B: Tell them some things you liked about the puzzle:

Two Craig Stowe Mondays in a row! He’s certainly not vacation, so don’t expect a 59a: 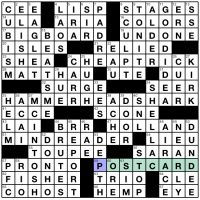 17a: BIG BOARD [NYSE nickname, with “The”]
24a: CHEAP TRICK [“I Want You to Want Me” band] – Such a good song!
35a: HAMMERHEAD SHARK [Stingray predator named for a tool] – For whatever reason, this made me want to listen to Peter Gabriel’s “Sledgehammer”!
51a: MIND READER [Clairvoyant] – It’s odd that 34a SEER is also clued as [Clairvoyant]. I know that sometimes two pieces of fill will get the same clue to make things a bit trickier, but it feels odd to spread that over one themed clue and one non-themed clue.
59a: POSTCARD [Vacation memento … or where you might find the ends of the answers to starred clues?]

This is a cute revealer, giving us CARDBOARD, CARD TRICK, CARD SHARK, and CARD READER. The middle two refer to the same type of card, but that’s only the tiniest of dings. Another small ding for some less than exciting short fill, including ULA, UTE, ECCE (fun fact: I read this as [PiRate’s “Behold!”] for way too long + AVAST did not fit), CLE, and EES. Otherwise, a lovely Monday puzzle. What more could you want? BEATS ME!

#includemorewomen: There’s only one (!) woman represented in today’s clues or fill (aside from maybe one of the clairvoyants?), and it couldn’t be more timely. Charlotte RAE was an actress and comedian who died just last week at the age of 92. She was most well known for playing Edna Garrett in both Diff’rent Strokes and The Facts of Life, and more recently featured in Girl Meets World. Amazingly, she was childhood friends with previous #includemorewomen honoree Golda Meir during their early years in Wisconsin! She starred across stage and screen to much acclaim and conquered pancreatic cancer along the way, but ultimately succumbed to bone cancer. The upcoming The Facts of Life reboot simply won’t be the same without her. Rest in Peace, Charlotte Rae.