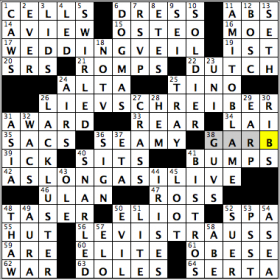 Good day, my crossword-loving friends! I hope you’re all doing well at the beginning of this new week. Though I would always encourage you to do bits of good each and every day, solving this puzzle gave you an out to explore some EVIL (50D: [Devil’s work…and what’s mixed up in the four longest answers]), with each of the four longest entries either starting or finishing four letters that end up being anagrams of “evil.”

What was slick with the construction of the grid was that the anagrams were alternated between the beginning and the end of the theme entries when going down the grid. Very nice! So the juiciest fill definitely was the theme entries, though I definitely liked AM I TO BLAME as well (11D: [“Is this my fault?”]). Usually, in my everyday conversation, I’ll usually say something along the lines of “Did I do that?” if I want to know if I erred in something. (No, I’m not going to lead you down the Steve Urkel/Family Matters rabbit hole!) I can’t say that I’ve ever seen GUVS before spelled that way (with the “u”) as it pertains to the heads of states, though I know that “guv” is/has been used as a term to address adult men (38D: [State VIPs, informally]). I’m sure I wasn’t the only person that, when solving, typed in “seedy” instead of SEAMY, and doing the former cost me about a minute because I was sure I was correct initially and moved on in my solving (36A: [Quite sordid]). Probably my favorite clue/entry combo for this grid was SERTA, because it reminded me of those really funny (at least funny in my eyes) commercials with the animated counting sheep being rendered useless because of Serta’s comfortable beds (64A: [Brand with a “Counting Sheep” ad campaign]). Here’s just one of those ads…

Yes, there was some LACKLUSTER (26D: [Drab]) fill in the grid, but let’s take one of those entries and turn it into something you might need to know in a crossword puzzle that you might come across in the future.

“Sports will make you smarter” moment of the day: OLE (43D: [Barcelona “Bravo!”]) – The soccer season in Europe has gotten underway in earnest , and this is the perfect time to mention one of the most memorable moments in the history of European soccer: That’s when Norwegian soccer player OLE Gunnar Solskjær scored the game-winning goal in second-half stoppage time (time added on at the end of the 90 minutes of regulation time due to injuries/other stoppages) to lift his team, Manchester United, to the 1999 UEFA Champions League title with s 2-1 come-from-behind win over Bayern München in the Final which took place in, of all places, Barcelona! (See the clue for the synergy.) Ole’s goal was the second goal that Man U (nickname for Manchester United) scored in stoppage time, as Teddy Sheringham had scored a couple of minutes prior (91st minute of the game) to tie the game at 1-1. Below is the video of United’s game-tying and game-winning goals, with Ole Solskjær scoring the winner.

Thank you so very much for your time today! Have a wonderful rest of your Tuesday and, as always, keep solving!! 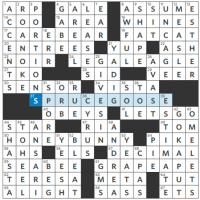 Mid-solve joy: Discovering that there were way more theme entries than I expected! Just looking at the puzzle, I expected 3 / maybe 5 long across themers, but it was a nice moment when I discovered FAT CAT hidden up in the NE corner (and, eventually SEA BEE in the symmetrical SW spot)! Anyone who knows my love for Bojack Horseman knows how much I appreciate animal rhymes/puns and, thus, this puzzle.

Mid-solve sour face: The SW corner of the puzzle was rough. I got HONEYBUNNY, ELS, SHASTA, ANSARI, BEG, and BLEAT. Those helped me get ALIGHT, but other than that, I was stuck. TO HEEL? SEA BEE? TERESA Stratas? YEESH? I haven’t heard of any of those (and YEESH could have been any number of related expressions), so I had to run the alphabet at some of those crossings to end up with some educated guesses.

This, however, was made up for by some fun cluing: [Matters of course?] for ENTREES, [It’s never pointless] for DECIMAL, and [Spot of trouble?] for the singular MEASLE each made me smile. I’m still not sure how ACCENTS relates to [Grave markers?] – maybe as a subtle punctuation joke? Let me know what I’m missing in the comments below. 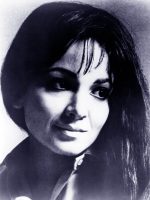 #includemorewomen: In this week’s puzzle, we have gay icon Miley CYRUS, but I’m interested in learning more about stymie-me-in-the-SW-corner TERESA Stratas. According to her Wikipedia entry, Stratas “(born May 26, 1938 in Toronto, Ontario), is a retired Canadian operatic soprano of Greek descent. She is especially well known for her award-winning recording of Alban Berg’s Lulu.” I’m going to attribute not recognizing her to not being Canadian, not knowing classical music, and/or being after her time? Or, I should just know more things. :D She seems to have been quite impressive in her field, appearing “in 385 performances of 41 different roles” over the span of a 36-year (!) career, earning two Grammy Awards, a star on Canada’s Walk of Fame, and many other awards. Now we know for the next time she pops up! :)

PS: I neglected to mention in my review of last Tuesday’s WSJ puzzle that the WSJ now includes puzzles with circles in the squares (to indicate specific theme-relevant squares)! I’m a new enough solver where I assumed that’d been a feature before last week, but it has not. It’s cool to see crossword outlets evolve the types of puzzles they’re able to support! 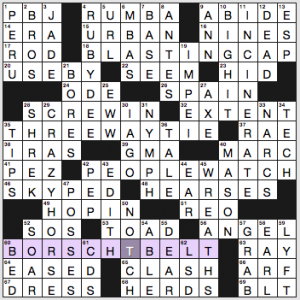 The Wonder Twins of Indie Crosswords have activated their powers! The four themers are things (well, three nouns and a verb) reinterpreted as highly specific fashion accessories:

Crisp and fun Tuesday theme, and the themers are even arranged from head to toe (well, down to the waist, anyway). With 44 theme squares, Andy and Erik have left themselves room to make a smooth and lively grid. The 1a/69a first/last combo of three-letter sandwiches PBJ and BLT is a nice touch. SCREW IN, SKYPED, SHREK, CRAZY HORSE, RUBY DEE, NYMPH (I’d have liked an entomological clue here), and BIG HIT are good. And there is no junk fill. This puzzle did not Tuez. (That’s a verb, you know. Because so many Tuesday NYT puzzles are disappointing. They Tuez.)

4.5 stars from me. Bonus points for being a Tuesday puzzle sans Tuezzing! 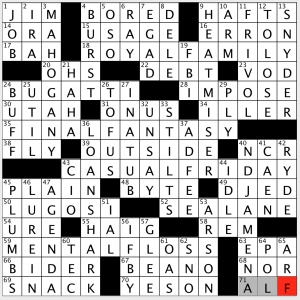 We have somewhat of a current event that inspired the theme here this week. The news is revealed at the “revealer” entry at 71A, the last of the 5 theme entries:

The news of an Alf reboot hit my Facebook feed this past week in the form of an informal Jon Delfin poll: Who liked the show before, and who would watch it now? The majority opinion was no and no, but we will all catch at least a portion of it just to see what they do differently! Or, maybe not! For me, it depends on what game is on that night! I guess I could see if my 6-year-old would be interested, but until they broadcast it on YouTube, that is highly unlikely! A solid 4.6 stars for this Alf tribute puzzle!

See you this weekend! 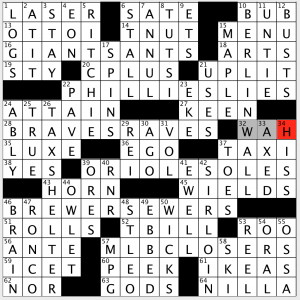 Here is my theory. Since Jon Markman is not in the constructor database on this site, this is either one of his first puzzles or he is part of the genius behind the theme! Jeff, feel free to explain if you see this post! Either way, SOMEBODY is a baseball fan!

Yes, there are SIX theme entries, which deserves kudos! All of the theme phrases are words found at the ends of baseball team names. Some are four letters and some are five, but I wonder if any other teams can be fit in here in this way? YANKEES KEES? Nope. TWINS WINS could have worked, along with ANGELS GELS or PIRATES RATES. I am sure some of these might be on the cutting room floor due to word length. Perhaps a little campy for a theme, but I like sports and I think it was fun. 4.5 stars from me.