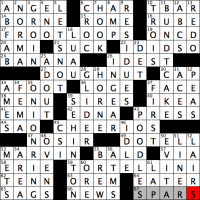 hello and welcome to episode #532 of matt gaffney’s weekly crossword contest, “Stuff Your Pie Hole”. for this week-2-cum-week-1 puzzle, matt challenges us to name a breakfast food that would’ve made a good seventh theme entry. (i often try to solve week 1 metas without the instructions, and had i remembered that matt had promised to make this week 2 as easy as a week 1 i might have tried to do it again, but i did not remember, so i saw the instructions before starting the puzzle.) what are the six theme entries we already have?

anyway, what do these six foods have in common? they are all topologically equivalent to a torus, that’s what. in less mathematical terms, they all have one hole (so something like swiss cheese or a standard 2- or 3-hole pretzel doesn’t fit). come to think of it, not that many foods are like that, so this is a fairly tight set… but with one notable omission, and that’s the meta answer: the bagel.

are there any other good ones? canned pineapple rings, i guess, but i’m not sure there’s a good canonical name for them that doesn’t duplicated RINGS from ONION RINGS. lifesavers candy is surely worth a mention. is there anything else that could be a legitimate meta answer? i can’t think of any clear-cut alternatives. a coffee mug is (topologically speaking) a torus, but it’s not really itself a breakfast food.

i’d like to think “hole foods” would have been a nice title for this puzzle, but i suppose that title plus the instructions would obviate the crossword itself (although, to be fair, at least two of the six theme answers in the grid are certainly breakfast foods).

that’s all i’ve got this week. hope to see many of you at lollapuzzoola on saturday!