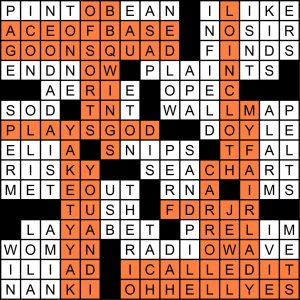 This is pretty much what I think a freestyle crossword should look like in 2018. I’ve highlighted the entries in the grid I considered to be either marquee or at least very good, ‘marquee’ being the ones where your synapses fire like crazy as you’re filling in its letters. I know you can read but I’ll just type them out so they can be Googled later, plus to emphasize the point that a dozen or more of these is really what makes a themeless puzzle. Once you forgo a theme, you have an obligation for the grid to be full of outstanding entries, like this one: GOON SQUAD, I CALLED IT, MY FAIR LADY, YAKETY YAK, FDRJR, PLAYS GOD, JEWEL, OF SORTS, CARROLL, LOINCLOTH, OH HELL YES, and of course the great BBQ WINGS camouflaged nicely in the middle somewhere, lurking like a crocodile, unlike the old days when we would’ve stuck this at 1-Across because that’s what you did.

Let’s give it the worst-five-entries test to see the price paid for all that good stuff: DAH, IVIE, TFAL, ELIA, APA. That’s not awful, so certainly worth it I’d say. I didn’t cringe at all during my solve, which was: put ACE OF BASE in at 15a. [Pop group with the 1993 #2 hit “All That She Wants”] then 17d. [Tough crowd?] GOON SQUAD tumbled and off to the races. Then a gradual downward-and-rightward cascade of words filled in as is typical.

***Took a good 30 seconds to understand the clue to INFIELD at 10d. [First, second and third place]. Was this a horse-racing reference? Is “place” a typo for “base,” which wouldn’t make sense anyway? Then the a-ha moment — it’s just “place where you’d find first, second, and third (bases).” Sneaky.

***Apt final entry to note: ENDNOW 19a. [Program-closing command on a PC].

I thought this was great, but I unfortunately haven’t been solving as many themelesses as I’d’ve liked over the past few years. Are they all this good now? Scary if so. 4.35 stars.

Ironically, the title reveals the secret of the theme at first glance. -IC is added to key words in certain phrases. 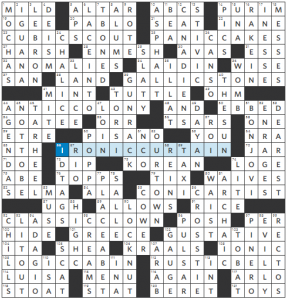 On the whole, I didn’t get many thrills out of this add-some-letters theme. There’s nothing really new here and the chuckle-meter barely twitched.

Maybe it was also due to some of the rough fill. Let’s see, there’s LACE INTO [Attack], LAID IN [Saved for the future], SLATY [Bluish-gray], DAYAN [Meir’s minister of defense], POPPA [Old man], and KRAALS [South African villages]. That’s a lot of unpleasantness to have to swallow.

There are good things to be sure: CANADIENS, CHALICE, GUNRACK, BON JOVI, OUR TOWN, PLACE A BET, ARCHAIC, CROSS-TIE, ANOMALIES, GUSTATIVE, ASPHALT, LOCKNUT, and PULSAR. That’s more than I remembered during the solve since I felt like I was just slogging my way through.

Oh, did you notice ETRE [Start of le monologue d’Hamlet] crossing NOT TO BE [Doomed from the start]? Odd that they weren’t cross-referenced.

This standard theme only works part of the time and the rough fill in the grid overshadowed the nicer parts. 2.9 stars. 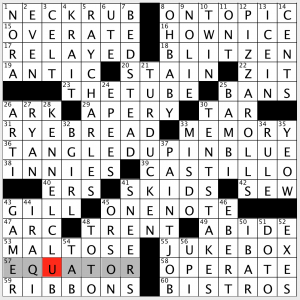 These two always make fun puzzles, and this one is no exception. I count 70 words, and if the G at 43A was instead an F, this puzzle would be pangrammatic. I know that is usually not a goal, but I wonder if the constructors realized that? Tons of fun stuff in here, and I may have learned a new tidbit or two, which is always welcome! 4.5 stars for this one!

That is all. Another LAT write-up coming from me on Tuesday. 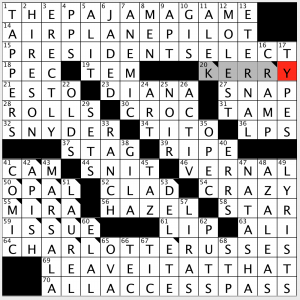 I thought I was going to jam through this one like I did before, but I got mired down in a corner, and I will try to explain why in the comments below. If you take one look at the error marks in the grid image, you can easily tell where I had my … issues. There are some nice stacks going on here, but the middle played a little easy with all the shorter words. If I hadn’t done what I did, I might have had a quicker time. But for a Stumper, I am still happy with a sub-15 minute time. Which probably means look out next week! 4.2 stars today.