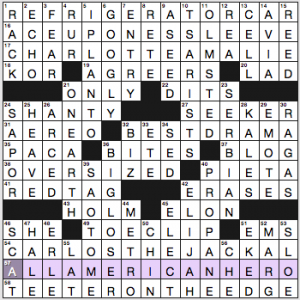 Eh. triple-stacked 15s. Rarely are these puzzles up my alley. While CHARLOTTE AMALIE, CARLOS THE JACKAL (not dinging the puzzle for the related Charlotte and Carlos names), ALL-AMERICAN HERO (shout-out to Jesse Owens), and TEETER ON THE EDGE are cool, there were too many tradeoffs in the grid. Roll-your-own word AGREERS, green-paint RED TAG, crosswordese DITS RETE ERLE SED (and honorable mention to ELON EMS RUR AVIA AEREO SLOE), partial A SEED, awkward SAPOR, weird abbrev KOR, plural KALES, a forgotten REA … those harshed my cruciverbal mellow.

2.9 stars from me. I prefer my themelesses to be less constrained and smoother. 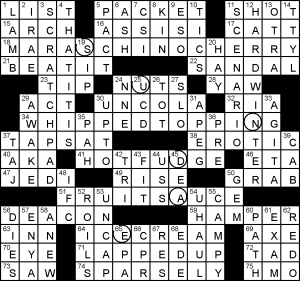 I experienced a cultural disconnect with this puzzle. That isn’t its fault. I have eaten a SUNDAE a few times (most memorably at a roadhouse in Randfontein, after which I took my supper home it was that large, for comparison.) but I have never heard of WHIPPEDTOPPING or FRUITSAUCE. Both google typically for commonly used phrases, but I’ve never encountered them before. There are six assymetric answers in this plus-sized left-right symmetry grid. They are the ingredients in a hypothetical sundae: MARASCHINOCHERRY, NUTS, WHIPPEDTOPPING, HOTFUDGE, FRUITSAUCE, ICECREAM.

It was a very crowded grid, and you have to tolerate a lot of short stuff, particularly things like EDE and APEG. My error was RAJ/RAPSAT and I suspect I won’t be the only one.

This entry was posted in Daily Puzzles and tagged Jeffrey Wechsler, Roland Huget. Bookmark the permalink.