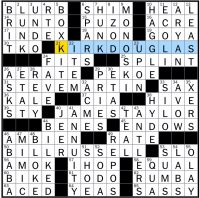 It’s famous person arithmetic! Names of persons of one profession are added together to make the name of another person of that profession, like so:

This works! It reminds me of that game where you say, “If Ella Fitzgerald married Darth Vader she’d be Ella Vader!” (it’s an old game; she needn’t take his name were they to marry, and also are we sure that Vader is his last name? Do the Sith have surnames? Someone check Wookieepedia). All things being [58a: =]: EQUAL, I have a few nits to pick. Like, sometimes the added name is a last name and sometimes it’s a first name. It would’ve been cooler and/or more consistent if all of them had those first names that are sometimes also last names or vice versa. Also there’s only one woman in the whole theme set. Just sayin’. I am, as you know, [65a: Full of attitude]: SASSY.

In the fill we’ve got a reversal and/or non-heteronormativity in [7d: Object of an ogler]: HUNK. Would be fun to ride a [9d: Relative of a snowboard]: MONOSKI while towing a [5d: Flying toy that’s open-ended]: BOX KITE. Be careful when you [10d: Try to get a better deal]: HAGGLE; you may get [44d: Swindled]: BILKED. For many of us [35d: Gen ___ (post-baby boomers)]: XERS, the [8d: Polo competitor]: IZOD shirt was the epitome of prep snobbery. Time for bed; tonight I’ll need some [46a: Drug for insomniacs]: AMBIEN.

With a title like that, this better be a good puzzle! 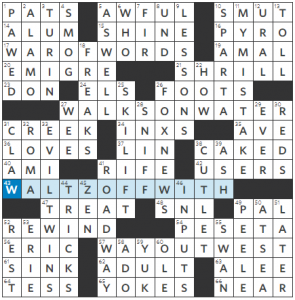 I think you see what’s going on here. We have three-word phrases of the form W- O- W-.

I’m not a huge fan of phrases ending in prepositions, especially as theme entries, but to WALTZ OFF WITH something is such a fun image, I’ll give it a pass.

I thought this was a really nice Monday-level theme, executed very cleanly. For kicks, I checked the cruciverb database for anything similar. Well whaddya know, here’s one from Freddie Cheng in the NYT from just two years ago…with the exact same theme entries plus a revealer of WOW FACTOR. And here’s one from our very own Gareth Bain in the LAT from three years ago also with WOW FACTOR but using WHERE OR WHEN instead of WALTZ OFF WITH. So that’s all three major daily papers with this exact theme. I think we can stop now. 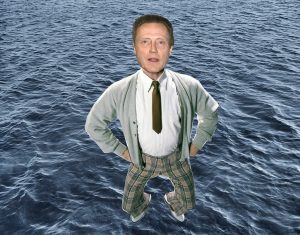 I’m kinda surprised none of them used the popular video game WORLD OF WARCRAFT which I think is well-known enough to be put into a grid. Plus, it’s a grid-spanning 15 letters.

If I was making this puzzle, I think I would go with: WINDS OF WAR paired with WAY OUT WEST, WORLD OF WARCRAFT in the middle, and WORDS OF WISDOM paired with WALKED ON WATER. But that sounds weird in the past tense, eh? How about WALKEN ON WATER?

One nice, probably little-noticed, thing about the existing theme choices: none of the O words is duplicated. In my fake example, I have an OUT, an ON, and three OFs.

I guess I should talk about theme duplication here. While it may seem remarkable that three puzzles by three different constructors can share so many theme entries, keep in mind that constructors all have the same mindset (playing with words) and are using the same dataset (the English language) and similar tools. I am very doubtful that there was any kind of plagiarism going on here, because that would be a stupid and careless thing to do. No, this is just a matter of constructors coming up with the same idea but only having a limited number of entries to work with. And from what I’ve heard (and as evidenced by this very puzzle), editors don’t really care what’s been published in other venues. 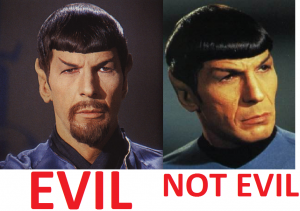 Moving on, the fill is wonderfully smooth. Highlights are “MY MISTAKE,” EVIL TWINS [Fictional baddies often sporting goatees], and SKI LIFT. FOX NEWS makes for interesting fill, but I wouldn’t call it a highlight. At least the clue refers to Shepard Smith who appears to be the sole voice of reason over there.

Even the shorter stuff is of interest: TURIN, SPARTA, CUTLET, PESETA, Jordan PEELE, PYRO, etc. Some of the usual kludge can be found in AMI, UND, ALEE, etc. but nothing too bad. I don’t recall seeing AMAL before (19a, [Human rights lawyer Clooney]) in a grid, but I expect this won’t be the last time.

Overall, this was a lively puzzle. Since I didn’t remember that the theme had been done before, I enjoyed both theme and fill. 3.6 stars.

There’s no Reign of Terror in this lovely Monday LAT puzzle, brought to us by the LEGEND herself, C. C. Burnikel: 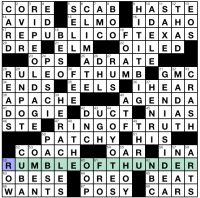 17A: REPUBLIC OF TEXAS [Sam Houston served twice as its president]
28A: RULE OF THUMB [General guideline]
47A: RING OF TRUTH [Credible quality]
59A: RUMBLE OF THUNDER [Hint that a storm is approaching] – This is the only themer that didn’t seem as fully in the language, but it certainly evokes what it’s meant to.

I really enjoy early-week puzzles with themes that are tidy and consistent like this: four different phrases, all of which follow the R____ of T____ pattern. Rule of Threes and Reign of Terror are the only other ones I can think up, so this seems to me like a really tight theme set, which I really appreciate. (I did think there was more early on – I had the R and O of RIPE OLD AGE as I started solving and I thought the two long downs might also be themers, but that would have been beyond packed, theme square-wise.) Can we also talk about how clean this grid is? The worst schmutz I could find was INA ITHE RUS, which I’ll take any day.

#includemorewomen: In today’s puzzle, we have NIAS [Long and Vardalo], STE [Jeanne d’Arc], [“Skyfall” singer] ADELE, and [Dawn goddess] EOS. Whom should I write about? Well, I’ll consider a bit of fantastic advice from Erik Agard (paraphrased here): If you have the option to clue with respect to or focus on people of color and/or women, you should. Given that, let’s highlight the only woman of color in this grid, NIA Long. She is an acclaimed actress who has starred in shows like Empire, NCIS: Los Angeles, House of Lies, and Third Watch, along with movies like Soul Food. What I didn’t know until today is that she played Will Smith’s character’s girlfriend on The Fresh Prince of Bel-Air early in her career in the 90s and had previous to that been in Living Single and Boyz in the Hood. I didn’t realize she was so present in my tween/teen media consumption! Thanks for all of your great roles, NIA! 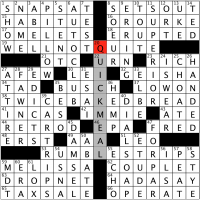 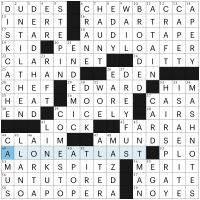 We’ve got a juicy themeless from Patrick Berry this week; does it ever feel like he can just make these things in his sleep? I suppose if it’s the only thing you do (also looking at you and your impressive bodies of work, handful of other people who are full-time puzzlemakers), you get to be very, very good at that thing, because what other choice do you have?

There seemed to be many olde timey entries in this grid but they seemed sweet and quaint, not crusty: AUDIOTAPE, ALONE AT LAST, MASH NOTES, FARRAH Fawcett ffs. Digging deep we’ve got swimmer MARK SPITZ and poet Alfred NOYES, plus polar explorer Roald AMUNDSEN, who not only beat Robert Falcon Scott to the South Pole, but made it back alive. Berry’s talent lets him LINK UP all those nice stacks in the wide-open corners with decent fill; maybe Hugh CAPET, King of the Franks from 987 to 996, isn’t a household name, but DUDES — you’ve heard of Albert CAMUS: “The realization that life is absurd cannot be an end, but only a beginning.”

I return from vacation and I have four reviews on the site today (way to ease back into blogging, Laura, geez). I’ll be back to HAUNT you Fiends on Friday. UNTIL THEN, check out Tracy Turnblad’s crossword-grid-inspired dress in the closing number of HAIRSPRAY: