I’m back from Lollapuzzoola and a week-long family vacation. Thanks to Derek for covering last week’s WSJ contest (I solved it post-Lolla in a Chelsea bar with my trivia team after we placed 3rd). 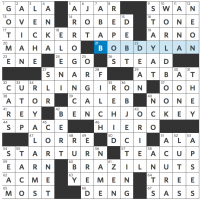 We’re looking for a six-letter noun, and the title warns us to mind the gap. Which gap? Let’s take a look at the starred entries:

Nothing seems to be related from the meaning or sense of the themers, so let’s go to an extraction method from Metasolving 101: Put things in a list, and see what emerges:

We were told to mind the gap, so in my list I included the “gap” in each two-word phrase. Hmmm, could something go in there? Wait, BOB ends with B, and DYLAN begins with D — in that gap we could put C. Do the other gaps between words work that way? Why, so they do!

And there’s our answer: SCHISM, which is a kind of gap or break. I thought this was an excellent “advanced beginner” meta — in that, it wasn’t immediately gettable from the entries, but took just one more step of lateral reasoning. Your thoughts?