Rebus time! The small screen is made even smaller in today’s WaPo as short-titled T.V. shows are crammed into one tiny box. 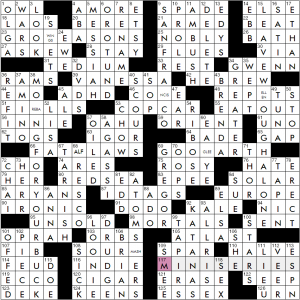 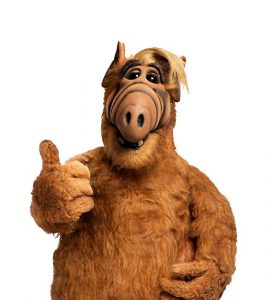 I liked this puzzle a lot, but it was much more challenging for me than usual. I correctly guessed the theme from the title before starting, and still struggled with nearly every rebus entry. I don’t think my brain is working right today. All of my crossword times are much higher than normal.

For instance, I figured the answers for 69A and 60D were probably GOOGLE EARTH and EAGLE EYE, but it felt like it took forever before I could see GLEE hiding in each. I actually wrote several of the theme answers out on paper just to hunt for a show title.

The tiny NW corner completely stumped me. I had ?SETS and knew the answer was SWING SETS. Across gave me ??OSEASONS and I knew the answer was GROWING SEASONS. But for some reason, I couldn’t figure it out. I foolishly entered “SWING” above SETS and figured it was some show I never heard of. I took a break from the puzzle and the answer hit me while I was weeding my garden. WINGS. Duh. 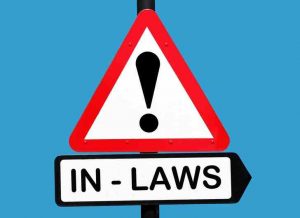 28A. [Avoid getting hit?] STAY. Had to run the alphabet for that T. The clue is referencing blackjack. Took a while for it to “hit me.” Ha. Ha. Ha.

66A. [Problems that spell doom]. I had ????LAWS. And while it didn’t fit, I really, really wanted the answer to be INLAWS.

113D. [Thunder shower, at times?] ESPN. I don’t know if I really like this clue or really dislike it… after all there’s no weather phenomenon called a “thunder shower” (which is the misdirection in the clue), but it’s still a clever concept.

124A. [Wails noisily] KEENS. Happily added to my lexicon. Never knew it could be a verb.

Here’s to hoping I’m a little more keen tomorrow. 4 stars from me, despite my hiccups. 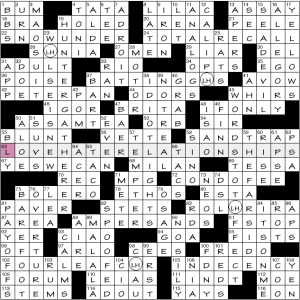 LOVE-HATE RELATIONSHIPS is clued 63a. [They involve mixed feelings … or a hint to four squares in this completed puzzle], and there are four rebus squares that use LOVE in the Across, HATE in the Down.

Works well enough, and I like 23d, 45d, and 102a. Took me a while to find two of the rebus squares! Glad the revealer specified that there were four.

Lots of longish fill in the puzzle beyond the theme. Likes: SNOW UNDER, TOTAL RECALL, PETER PAN, “YES WE CAN,” AMPERSANDS, HUNTER/GATHERER, BAREFOOT, IDIOT LIGHTS, SPOOFED, and THE FAR SIDE. 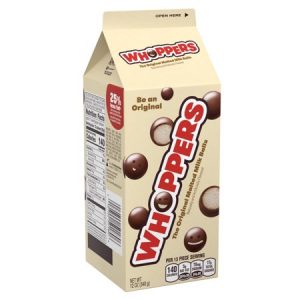 Ross Trudeau is rapidly becoming one of my favorite constructors. I was not looking forward to solving and blogging this puzzle; I am tired from driving in and out of NYC for Crosswords and Coffee (totally worth it!) and coming home to ongoing Rosh Hashanah prep. When I saw the constructor’s name, I instantly perked up. Fun puzzle!

Our theme answers are television M*A*S*Hups – two shows that share a word, one at the end and the other at the beginning, stuck together and clued accordingly.

Not a particularly challenging theme (I dropped a few of them in without any crossings) and I didn’t really care, because it’s so much fun.

Yawn. Sorry, too tired for a few other things. Let’s skip right to What I Didn’t Know Before I Did This Puzzle: I’m ashamed to admit it, but I didn’t know that the O in OPEC does not stand for OIL. If you’re as clueless as I was, it’s the Organization of the Petroleum Exporting Countries. 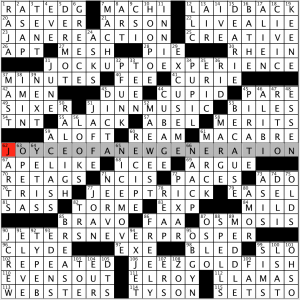 It’s a sound-change theme, whereby CHs become Js. This’ll be a short post from me today; gotta jop up some apples and bake some jallah.