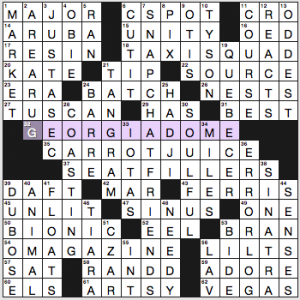 Ahhh, yes. I will pretty much always like an Andrew Ries themeless, as he’s keen on running a staggered stack of long entries through the middle and using lively fill throughout. 70-worders (or 72s) aren’t supposed to be as difficult to construct as lower-word-count themelesses, but it’s hard to maximize the zippiness with a tougher grid.

4.25 stars from me. An enjoyable solve from start to finish.

This was fun! Kyle Dolan returns with a beautiful grid filled with lots of tasty goodness.

The revealer at 132a is clued [Alphabet providing the “ingredients” of this puzzle’s soup]. I admit that that answer eluded me for almost the entire solve. Despite knowing the NATO alphabet, I didn’t recognize them in the theme answers. I think I was distracted by all the other good fill in the grid. Anyway, each theme answer starts with a letter from the NATO alphabet. 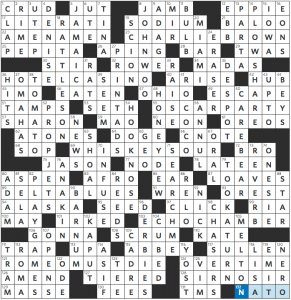 Those are brilliant choices for theme answers. Each one is clean, solid, and incontestable. Kudos to Kyle for finding lively choices that fit symmetrically.

But I will admit that when I finally uncovered the revealer, I felt a little let down. Each answer had a word that was also a NATO alphabet letter. So what?

And then the light bulb came on. What if these aren’t just random choices? What if they spell something? Let’s check: 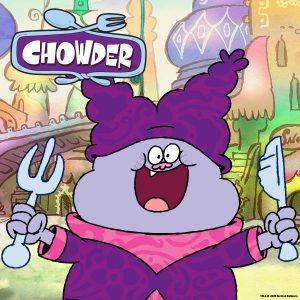 CHOWDER! A perfectly soupy conclusion to tie everything together. Fabulous!

And that was on top of all the fun words and phrases Kyle managed to cram into the fill: LITERATI, AMEN AMEN, RATTLES ON, JOHN WOO, PLOWSHARE, CARE BEAR, HONEYDEW, ROCOCO, JAMAICA, HOOK NOSE, “SEARCH ME,” PROP JETS (though I wanted PROP JOBS), PLAY GAMES, TOOK A TURN, OVERTIME, and “SIR, NO SIR!” That’s really good stuff.

I will admit (for the third time) that I got stuck in the middle. 27d [They offer deals on paper] looked like PRINTERS and right next door at 54d [Aquiline feature] was saying “HAWK NOSE” to me. And next door to that 65d [Political leader?] wanted NEO in my brain. That gave me MEA for 59a [Andy Warhol portrait subject] and RWNE for [Venetian magistrate]. I quickly corrected to HOOK NOSE, but that left me with MEO and RONE. Those didn’t seem right, but at least they were pronounceable. I should have known DOGE, so that’s all completely on me. 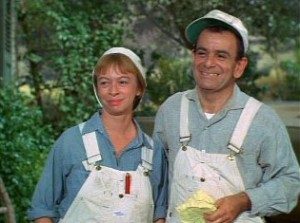 A few other outlier entries raised my eyebrows. For example, MELTON [Sid of “Green Acres”]. That’s a deep cut. Once you get past Eddie Albert and Eva Gabor and Arnold the pig, I’m lost. Other entries that gave me pause: OREST [Baritone role in “Elektra”], LATEEN [Sail shaped like a right triangle], and BEYS [Ottoman governors].

But those sticking points barely registered because I was enjoying the good fill and the fresh cluing. Cases in point:

Here’s TINA Turner absolutely owning “Proud Mary” in 1982. Let’s see John Fogerty do some of this! 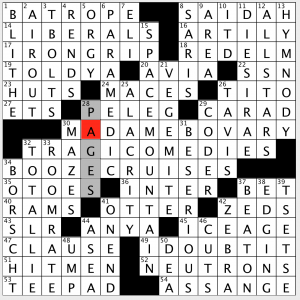 Have I solved a Ryan McCarty Saturday LAT before? I think so. Perhaps I should keep some sort of database, but that requires too much work. Maybe someone already has one? Anyway, I am sorry that the constructors name isn’t readily familiar to me, but it does ring a bell. That doesn’t detract from the fact that this is a great 66-word puzzle that I really enjoyed. The stacks crossing in the middle are quite impressive. 4.8 stars from me for this awesome grid!

See everybody on Tuesday! 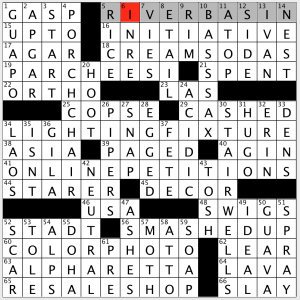 Perhaps watching OTHER people solve, like in the case of watching the geniuses solve these with downs only, is helping my solving! This one didn’t seem too horrible, although it is a Longo and is, in fact, truly a Stumper. But then, I think I have been slowly improving on Frank’s Stumpers for a while now. Perhaps after 3-4 years of blogging these I have finally figured out how he thinks! A solid 4.4 stars for another Longo gem, and I am curious to see how the Twitch solvers handle this one!