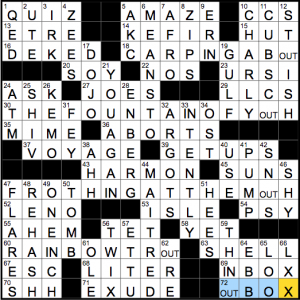 Alex has been busy! He has today’s Fireball puzzle and the New York Times puzzle.

Today’s puzzle has two revealers, stacked on top of each other in the southwest corner:

This one came together relatively quickly for me, but it still has that nice layered aha of “Oh, this is an IN rebus!” and then “Oh, it’s an IN and OUT rebus!”. Elegant to always have the IN box come first, then the OUT box, and also elegant to have the two revealers stacked on top of each other (even if it produced the ugly LXX [70, in old Rome]).

I really liked seeing YOU AGAIN?, MAITRE D’, and KEFIR. Elsewise, there was an unusual amount of ugly fill by AES’s standards in this one, which I found distracting: there was URSI on LLCS, ETRE in the NE to facilitate the Q/Z/J up there, OST, the aforementioned LXX. Very strange to have the bad partial KEMO crossing MIME when KENO/MINE (or even KETO diet / MITE) would’ve been a big improvement. Not sure why that happened.

Solid Thursday offering. Until next time!

It’s September! Better than pumpkin spice: the Fireball Crossword is back. (I know it was back last week, but the contests are Laura’s jam).

This one felt like it took even longer than the digitally alliterative time posted. Once I figured out the theme, it fell a bit faster but there were a couple of clues that completely foxed me.

The grid is 15×18 with an arrangement that seems unusual to me. I don’t think it makes a picture. Does it?

First the theme: Take a word or phrase that ends in E. Find word or name ending in Q that can substitute for the E in a punny way. Clue accordingly. 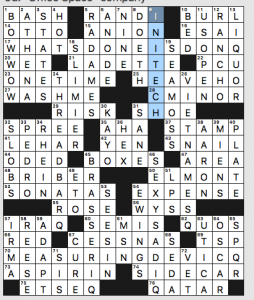 It was worth it, though. This is one of those puzzles that is both a feat of construction (all those Qs!) and a lot of fun to solve. Some of the crossing Q words are crosswordese or roll-your-own (I’m looking at you, ET SEQ and QUOS) and I really don’t care. This is an ORCA contender.

What I didn’t know before I did this puzzle: I am ashamed to admit that I did not know the Belmont Stakes are held in ELMONT, NY. I also didn’t know that INITECH is the name of the company in “Office Space.”

Whew! That was a workout. I could not sort this one out for a long time. It didn’t help that I had the entire northwest of the grid filled in without even a whiff of what the theme might be (because there isn’t anything thematic in that corner, except for POL which I thought just had a bad clue). I had huge gaps of white space all over the place due to the theme, tough cluing, and some rough fill. Finally, I stared DIAL TONES into submission at 8d, and that broke open that corner and led to the theme answer at 18a.

The theme is LANDSLIDE (19d, [Decisive victory, and any of four features of this puzzle]). Each of the four main theme answers ends with -LAND, but those letters slide down and to the right.

This was a wonderful theme that made completing this grid a good challenge, just what you want toward the end of the week. My a-ha moment was long-delayed but very satisfying. My only gripe with the theme is the inconsistency in having two countries, and two non-countries. But at least they are sort-of symmetrical in the grid.

A few things take away from the fun though, things like the crossing of uncommon proper names (in foreign languages no less) and a healthy dose of crosswordese. No doubt filling this grid was a challenge because of all the triple-checked squares.

First off is that central-west section where SWANN [“In Search of Lost Time” character] crosses WIEN [Capital on the Danube, to natives]. I don’t know the character nor the book, and I should know which capital is on the Danube, but, well, I just don’t. Plus, RUGGED fits the clue for RIGGED [Not fair, in a way], and ANIL [Dye-yielding shrub] hasn’t managed to find its place in my little gray cells just yet. (Is it ARIL? AROL? ANOL? Something else?)

Elsewhere, EDDS [TV’s Hall and Byrnes] is unfortunate fill, and the clue for ANS [Age units, in Arles] meant that I’m supposed to know that “an” is French for year. (I don’t.) I’d much rather have ODDS at 26d (giving TAKO a 23a which is [Octopus, at a sushi restaurant]) and a clue for ANS indicating that it was the abbreviation for “answer.”

But I’m starting to nitpick. In the end, once you include the sparkly long fill answers of DIAL TONES, ANGEL HAIR, PIT-A-PAT, and CANASTA, and the challenge of the theme itself, you can count this one in the win column. 3.7 stars from me. 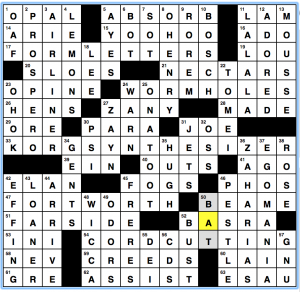 I liked the theme on this week’s BEQ:

Playing with the OR in the middle of FORM, WORM, KORG, FORT, and CORD makes for some fun here. 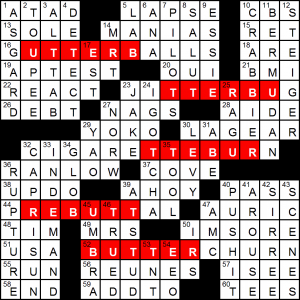 A bit of a stealth theme today. At first, I noticed the repeated TTER letters, but then CIGARETTEBURN showed up and put a spoke in the works. Turns out it’s the old “scrambled letters spanned across two parts of a word” trick. The letters are BUTTER, as explained in the cryptic-style revealer BUTTERCHURN. You have to CHURN the letters in BUTTER.