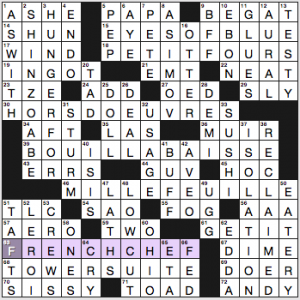 The theme is 63a. [Julia Child’s PBS show, with “The” … or one associated with the answers to the starred clues], FRENCH CHEF (… blurgh, “with ‘The'”). Four themers are French foods clued via their English translations:

I might’ve liked the theme better without FRENCH CHEF in it. Presumably there are other French foods whose names come from other French words. Not sure if Child addressed these four recipes on her TV show. And even if she did, they’re no more associated with her than they are with France itself.

Lots of somewhat clunky short fill wedged in here amid the themers and the other six long non-thematic answers. TZE GUV SAO ENDO TAFTS AVEO EBON EDDA? UGG. AS WITH felt weird, too. And having French LE ROI outside of the theme is weird.

54a holds the revealer ROLLS OF THE DICE which is clued with [Crapshoots, or what you can find in 20-, 31- and 39-Across]. Each of the other theme answers contains the letters DICE in a different formation. 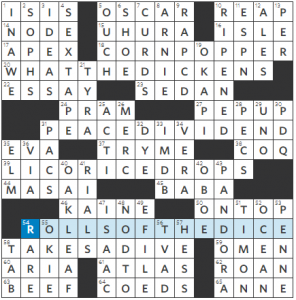 Solid entries, but the really good part is that the letters simulate rolling by maintaining their order, except for the last letter which moves to the front. And so we have EDIC, CEDI, ICED, and lastly DICE in the revealer. That’s a nice touch. 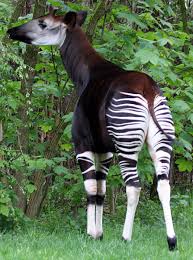 I was thrown off for a bit by the long Across answers at 19a and 58a, but the revealer makes it pretty clear they aren’t part of the theme. However, they are the lovely entries CORN POPPER and TAKES A DIVE. SEX TAPE is pretty steamy, and I like OAK LEAF and PANDORA as well. And it comes up a lot more in crosswords than in real life, but I always like seeing the OKAPI [Animal also called a forest giraffe]. Plenty of fun entries there.

The iffiest answer is at 9d RAP CD [Ludacris production]. Maybe in the 90s. Are they still making CDs? 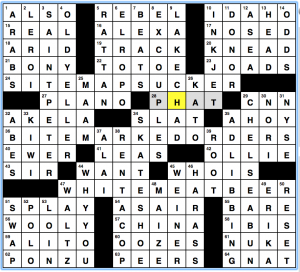 One thing that’s always interesting (to me, at least) is that the more you do puzles by certain authors, the more you find out how your minds overlap when it comes to thinking of the same things.  There are constructors who I instantly get on the same wavelength when they appear in the NYT or AVCX.  And then there’s Byron Walden, who I’m constantly out of sync with.

“Hidden Agenda” is a great puzzle, and its gimmick is probably something I’ve seen before in another venue, but it took me a solid 5 minutes of being away from the grid to suddenly have what was going on snap into focus:

“Hidden Agenda” should have been enough of a push, but I needed to piece together WHITE MEAT BEER becoming WHEAT BEER to realize that each of these entries has a hidden ITEM modifying the phrase.  SAPSUCKER and BARKED ORDERS complete the trio here.  The rest of the cluing/fill here was pretty good even if it was a little off my wavelength.  In particular, I liked PONZU, CHELSEA BUN (which I identified as the “Cinnamon roll look-alike made with currants” right away after a ton of seasons of Great British Bake Off), and LAKE CHAD 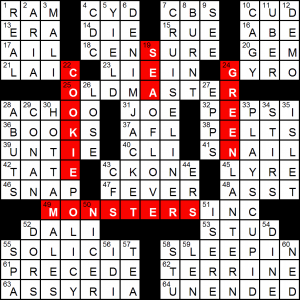 I keep feeling like I’m missing something in this puzzle, but I can’t seen anything more. Three down answers begin with words fitting the phrase “___ Monster”. They all cross MONSTERSINC, though the INC seems extraneous to the theme. I tried to find “in C” as in GREENSEA but that didn’t go anywhere. There are only three answers, but I can’t think of too many other viable options. As it is the GREENMONSTER is a very specific wall of a baseball field, albeit a well-chronicled one. There is a BLUEMONSTER in golf, but the associated tournament which gave it some prestige was moved to Mexico, and besides, it’s now owned by Voldemort. The Spaghetti Monster is further modified by Flying. So, that’s why the theme is minimal.

The design features left-right symmetry and two long down 11s that have nothing to do with the theme. The design also makes it feel like you have to wade through banks of 3-letter answers. To be fair, only perhaps CYD and definitely CLI and CFS are wince-inducing. CFS/CKONE is by far the roughest cross in the puzzle. I won’t blame anyone for guessing wrong there!