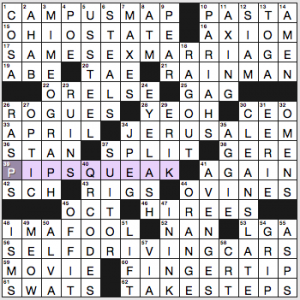 What what? A Saturday puzzle that plays like an easy-to-midlevel Friday puzzle? Ripoff! I wanted 20% more challenge, minimum.

Let’s see what we’ve got here. Entries I like: SAME-SEX MARRIAGE, PIPSQUEAK, SELF-DRIVING CARS (yeesh), an old-school/obsolete MIMEOGRAPH (never used one, but I have run off copies on a Ditto machine—could’ve done without the connected TAE, Thomas ALVA Edison, though), and CLEAN SLATE.

HIREES is one of those entries I never care for. Who uses this word?? You call those people “new hires” or maybe just “hires.” “I’M A FOOL” has a contrived feeling to it.

Our theme today pairs certain nouns with the past tense version of their homophones. 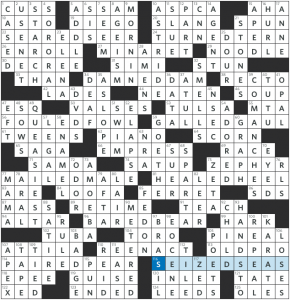 This worked well enough, but I didn’t find anything particularly engaging here. I suppose if you’re someone trying to break into the larger-sized weekend puzzles, this would be a good place to start. The theme is easy to grab on to, allowing you to fill in multiple theme answers with nary a crossing. But if you’re a long-time solver, you’ve seen this type of thing many a time before.

There isn’t much sparkle in the fill either. COMANCHES (39d, [Chief Buffalo Hump’s people]), for sure, is the star here. Its counterpart QUEASIEST (49d, [Greenest around the gills]) isn’t quite as fun in the superlative, but I still like it. Other nice things: MINARET, KARATE, AMOEBA, EOCENE, GOETHE, and ZEPHYR.

I was less excited to see EFT, SDS, partial S IS (due to the fact that the clue [Sisterly] is nearby), ASLOPE, SUER, and ATUL [Surgeon/author Gawande].

Another one that slowed me down was 50a VALSES [Some Ravel works]. This one’s new to me. Is there a subject matter expert out there willing to shed some light on this? 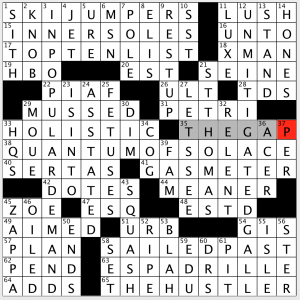 Is this the same Michael Ashley that has made “Double Cross,” or acrostic puzzle, in Games Magazine for years? I think I vaguely remember solving a puzzle or two of his in the NYT (xwordinfo.com says he has had 11!), so this must be the same person. I don’t believe I have ever met him, but he has provided me literally dozens of hours of solving fun, including this puzzle! A nice 72-worder with plenty of fun entries, including three interlocking 15s, which I will be sure to mention. Very well done. After I write this, I will print his acrostic from the 2018 Games World of Puzzles. (I print from the zinio.com website, where I subscribe to Games now! Just a tip …) A solid 4.5 stars from me today.

I have a 5k to run this morning! My first 5k in quite a while; so my time will likely be horrific. Have a great weekend! 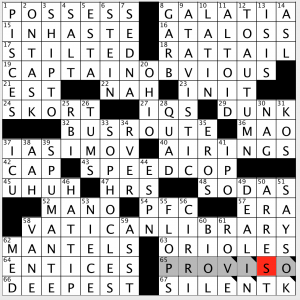 Matthew Sewell and Brad Wilber, the two behind this pseudonym, have cooked up a doozy of a Stumper for this weekend. I think I have caught most of the Twitch solving streams, an I believe there is another one on deck for this weekend, perhaps on Sunday night. Watch your Twitter feed, if you have one and follow the correct people! I found this one extremely difficult to obtain a toehold in, but once you get a little progress, it wasn’t terribly awful. I would classify this one as hard, but not frustrating. This is one of those Stumpers that when they DO solve with Downs Only, they will probably still finish faster than I did with all of the clues! 4.4 stars today.

There is a new Panda Magazine issue coming out today, so there goes MY weekend. Enjoy yours as well!