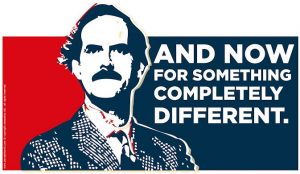 Fun from start to finish in today’s WaPo. I wouldn’t be a tad surprised if this week’s puzzle was off-putting to solvers looking for consistency in their Sunday puzzle, but I absolutely love “Something Different” puzzles (A.K.A. “Cuckoo Crosswords”). And whether you liked it or not, you have to admit Evan’s willingness to push the boundaries as to what is acceptable for a 21×21 grid in a major publication is admirable. Themeless? Sure. Variety puzzles? You got it. Metas? Not a problem. Quirky rebus themes? Check. Now add “Something Different” to that repertoire.

And there’s even a theme – errr – TWO themes in this puzzle, neither of which has a thing to do with the other!

Part of me wonders if, at one time, Evan was planning on building an entire theme around those presidential nicknames and couldn’t find a complete set. Of course, the other part doesn’t care because they were so much fun to uncover in a befitting venue.

And if I’m being honest, I didn’t pick up on the STORY TELLING anagram theme until a minute or so after I’d completed the grid. Usually when I don’t pick up on a theme until I’m finished, I’m left indifferent to the puzzle. The opposite is true here- It made me like it more.

There are far too many great clues and answers to list them all here, but here’s a few that stood out to me:

Honestly, I’m just randomly picking answers from the grid at this point. I liked most of them. Even ALOU SET for its wink at Crosswordese. I’d be interested to hear “Why didn’t you mention _______?!” in the comments.

I do have one entry I absolutely hated:

If you’re new to this type of puzzle, and you’d like to try a few more, here are a few links to past ones Evan created for his indie site, Devil Cross:

Also, Trip Payne has several at his site and writes one annually for Fireball (on April Fool’s Day). I always look forward to it.

Something tells me this is not the last time we’ll see a “Something Different” puzzle in the WaPo. I’m already excited for the next one.

4.9 stars from me. I have to ding it one tenth of a star because I had to write IN REESE [shiver!!]. 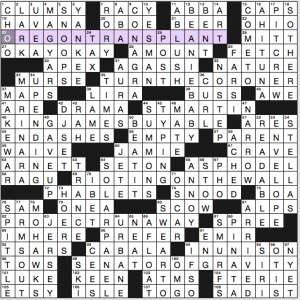 The theme entries are formed by inserting a schwa vowel sound into familiar phrases and cluing the resulting phrase accordingly:

I appreciate a theme with six Across entries, not complicating matters by jamming in more themers or running them Down, and further constraining the fill that fits into the grid. The fill’s pretty good here, and with a markedly contemporary/young vibe to it. To wit:

Do not like: 38d. [Uncool], LAME. You know what? People with physical disabilities that can be categorized as lameness can be cool, too. Stop using this word as an insult. I know it’s hard, because many of us grew up using the word without a second thought. But can’t we do a little better? Gold lamé is there for the taking. 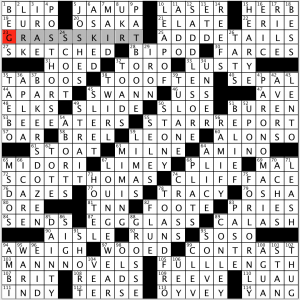 Phrases with triple-letter strings are the order of the day.

Greetings from the Jersey Shore (the real one, not the TV version) where David and I are spending a much-better-than-expected weekend. We’re thinking of our friends in North Carolina and wishing Florence would move right along, even if that means she heads up this way.

Today’s LAT is a letter-substitution theme with a constraint: as the title implies, each switch is for a letter that’s “one down” from the original. 108a spells it out, so to speak: [Classic audiophile’s equipment, and a hint to eight long puzzle answers] is CD CHANGER. In each theme answer, a C in the base phrase is changed to a D. Wackiness results. 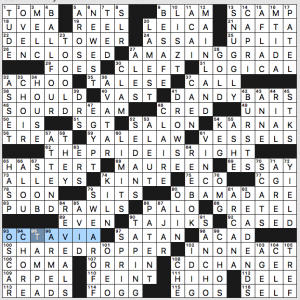 I like the fact that the C–>D wasn’t always in the first word of the answer. It’s a nice, consistent theme and all the base phrases are solidly in the language. Not a bad way to spend eight minutes of my Saturday night.

What I didn’t know before I did this puzzle: that “The 100” even existed, let alone that OCTAVIA was Bellamy’s sister. The Wikipedia article on the show helpfully tells us that “The 100” is pronounced The Hundred, which will save me from embarrassment if I ever have to discuss it.