IOO is the hidden “word” of the day as revealed at 73a with the clue [Arabic equivalent of C hidden in this puzzle’s five longest answers].

Looking at those entries you’ll find the improbable letter string of IOO right there spanning across actual valid phrases. 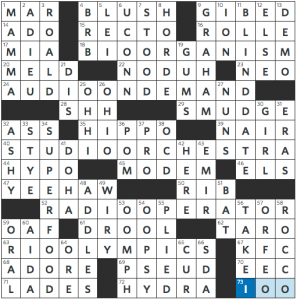 When I first grokked the theme, I didn’t think there was any way our constructor would have actual in-the-language phrases with that letter string. I presumed that they would be bodged together in some way.

But lo and behold, he did. And for that reason alone, I’m digging this puzzle. And you can’t deny that IOO looks a lot like 100 in the grid (of course IOO is actually 4 in binary). The double-O is responsible for a couple of nifty stacks in the grid as well: “OH, HI” and OHIO in the middle as well as OOMPH and OOPSY at the bottom which I thought was pretty fun. 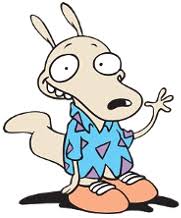 BLIND DATE and SUPERFOOD make for great long fill of course, but there were some scowly moments as well, specifically PSEUD [Intellectual poseur, informally] and that whole SE corner with KFC and EEC crossing ORFEO and ROCCO. When you have two uncommon proper names crossing two acronyms, that’s a rough section for the solver. I would have replaced EEC with EEK and ROCCO [Madonna’s eldest son] with ROCKO. The wallaby star of the cartoon Rocko’s Modern Life may be no better than ROCCO, but at least EEK is more gettable than EEC [Common Market, for short].

Oh yeah, one more scowly moment: [South Carolina’s senior senator] Graham, who said he’s already made up his mind even before any testimony from Ford or Kavanaugh is given. Ugh.

Other than those low points, this is a decent puzzle and the surprising thematic finds made this fun for me. 3.5 stars. 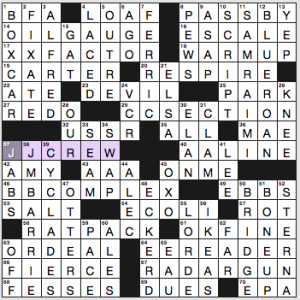 I like what I know of Melinda Gates’ philanthropic works, but I confess I did not love this puzzle. The theme takes terms that start with a stand-alone letter that’s followed by a word, and that first letter is doubled. The resulting phrase is clued accordingly:

I do like SAM RAIMI, J.M. BARRIE, BONE UP, OTTERS, and (just because it’s a pretty word) CYCLADES.

Five more things from the puzzle: 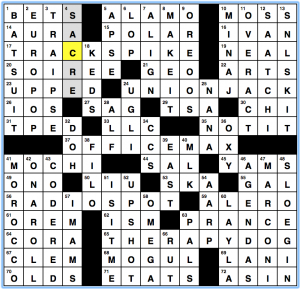 Today’s AVCX is from editor Ben Tausig and it has a really cute theme:

A theme based around office dogs is always going to be my jam.

Other things I liked: POLAR Seltzer (both as fill and over La Croix/Bubbly/lesser fizzy waters), turning a bunch of the three-letter horizontal fill into fun combos (IOS SAG: what happens when you try to upgrade your old iPhone to the new IOS was a favorite, as was ONO LIU: SKA GAL), EUROPOP like Ace of Base, SNL SKIT 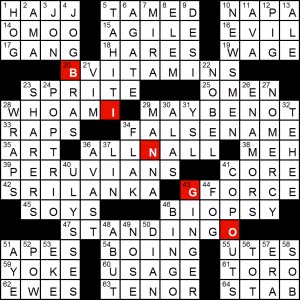 The symmetrical arrangement of B-I-N-G-O is the neatest thing in this puzzle by far. BINGO stands alone as a revealer, and is spelt out in (B)VITAMINS, WHOAM(I), ALL(N)ALL, (G)FORCE, STANDING(O). The middle answer is something of a deep cut, acknowledged the puzzle with a leading clue. Still, I checked, and it had Fantasy and Serpentine Fire (which charted higher, though I’d never have guessed that!) Do you have a craving for Philip Bailey right now?

What else? Didn’t know JOGBRAS (they seem to just be sports bras? If there’s a difference, my Google search didn’t clarify.) Don’t mind a new bit of fill, but not sure it was worth three chestnuts in HAJJ, OMOO and AMA… The best area is definitely PERUVIANS/SRILANKA/ULYSSES, even with crossing SHARERS and SOYS.