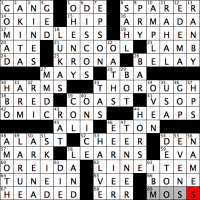 hello and welcome to episode #538 of matt gaffney’s weekly crossword contest, “To Be Continued”. for this week 3 puzzle, matt challenges us to find a five-letter adjective that I hope doesn’t apply to this puzzle. what are the theme answers? well, good question. there aren’t any long answers in the grid; there are a handful of 8s, and that’s it.

the first thing that jumped out at me was {Part of an appropriations bill} LINE-ITEM, as it’s tied for the longest answer in the grid, it occurs at the end of a row (i.e. it ends on the right edge of the grid), and it contains a hyphen. but i didn’t really know where to go with that. and, upon further consideration, i realized that clued this way, the answer is in fact LINE ITEM, a two-word noun that is not hyphenated at all. it would only be hyphenated as a two-word adjective, as in the context of LINE-ITEM VETO.

but surely we should be looking for something to do with HYPHENs and the ends of the rows. and taking a second look, i noticed that the entry immediately following HYPHEN was {Satisfied a snack attack} ATE, so you could put a hyphen after HYPHEN to get the hyphenated word HYPHENATE. and indeed, there are several other such entry pairs:

okay, time for the next key insight. LAMBDAS is a plural greek letter, but there’s another plural greek letter in the grid: {Greek letters} OMICRONS. so the extra word LAMBDAS satisfies the same clue. it turns out that all five of them have a similar clue partner elsewhere in the grid. in top-to-bottom order by HYPHENATEd word:

taking the first letters of these alternate answers in this order gives HO-HUM, which is a five-letter adjective. fittingly, it contains a hyphen, and it definitely does not apply to this puzzle! this was a wonderful meta. there were several extremely satisfying aha moments, and the premise of the meta was quite brilliant. there’s really nothing negative i could find to say about it, even if i were looking for something negative to say about it, which i’m not.