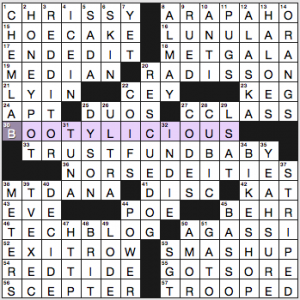 Listen, it’s been a long day for America, and we’re all tired and distracted. Crosswords are a nice balm, but then you get 23a. [Where college students might take a stand?] as the clue for KEG and you’re right back remembering the day’s news. Sigh. Let’s dig into the puzzle and see what else Kameron’s got for us.

BOOTYLICIOUS! Well, sure. Here’s your musical interlude for the evening.

I am of the perfect age to know 1a, CHRISSY Snow, without a moment’s hesitation. That made the puzzle feel like a Friday puzzle that’s not any more challenging than the typical one. I suppose it was a lot harder for those who weren’t watching sitcoms in the late ’70s. (Christmas Snow was the full name of Suzanne “Thighmaster” Somers’s character. Chrissy was short for Christmas.) And! SADA Thompson, who played the wonderful and warm and smart mom on Family, same era of my TV viewing.

Did not know: 38a. [Peak that marks the eastern boundary of Yosemite Natl. Park], MT. DANA. Worked the crossings hard for that one, especially with that vague 40d. [Call] clue for DECIDE.

TV near-collision: 42a. [Dennings of “2 Broke Girls”], KAT, right above BEHR, 45a. [Big name in house paint]. Dennings’s costar was Beth BehrS. Editorial note: My god, that show was awful. I only saw part of one episode, in syndication, but it was offensive on more than one front (Asian stereotyping, plus the unrealistic framing of “two waitresses loudly mocking a table of geeky customers within their earshot”) and I turned the channel.

Cheesiest clue: 34d. [Store that really should have a spokesperson], BIKE SHOP. Because bicycle wheels have spokes. *groan*

That’s all the braining I’ve got for tonight. How’d the puzzle treat you? Four stars from me. 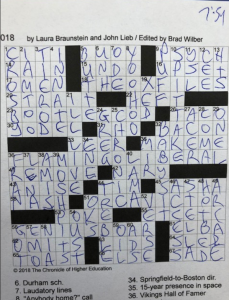 Matt here, pinch-hitting for Laura so she doesn’t have to self-blog. Her co-writer today is John Lieb, and they’ve come up with a pleasant new pair of wrinkles in the add-a-letter-hilarity-ensues genre: the five words added to are all animals, and the title is so apropos that I suspect it was conceived of before the puzzle itself. That title is “Balloon Animals,” hinting both that the animals balloon in size (i.e. grow by a letter), and visually the O resembles a balloon the animal is carrying around. Animals and ballons! Fun for everyone.

18a. [Database at a cattle auction?], THE OX FILES. From “The X-Files.” Imagine the data stored in the Ox Files! Scully and Mulder must know.
23a. [Fish served at a speakeasy?], BOOTLEG COD. From bootleg CD. I suggest you steer clear of bootleg sushi.
36a. [Pink bird in a blue state?], FLAMINGO LIBERAL. From flaming liberal. Flamingoes can’t vote, but they can still make their voices heard. If they have voices? I guess they must.
51a. [Outcome of “Free Willy”?], ORCA VICTOR. From RCA Victor. Nice one, but can I get a spoiler alert? I was going to watch the second half tonight.
56a. [An Einstein among swine?] = GENIUS BOAR. From genius bar. When i filled in NASH at 50-A my N made the 0 appear to be a 6, so about 15 seconds of my solve was trying to figure out how this clue worked for NASH.

I think this theme works nicely. It’s a cut above since the same letter is added to an animal in each instance, and all five are absurdly amusing as they’re supposed to be.

The clues are also nice and punchy, a good mix of humor, misdirection, trivia, and straightforwardness. Some favorites are [Wet reaction to dry humor?] for SPIT-TAKE, [Words said while dusting oneself off, maybe] for I’LL LIVE, and the echoing [Six Degrees of Kevin ___ (cinephile’s game)] and [Degree of separation] for BACON and REMOVE.

Also some instances of punching up familiar entries with new clues: gimme CITI becomes a little tougher when you add the possessive form of its borough, so [Queens’s ___ Field] tricked me there with its weird-lookingness (thought it was something British), and [A complete list would be overkill] for ETAL was similarly spirited.