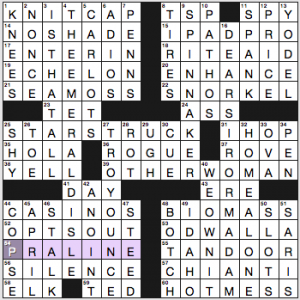 Saturday puzzle time! Are we all sleepy? No? Just me? Let’s get into this 66-worder.

54a. [Nutty confection], PRALINE? Dammit, I want some pralines right now! I had one in August in Florida and it was perfect. Chicago is not the best place to find freshly made pralines, alas.

Slang I needed the crossings to complete: 14a. [“Don’t mean any disrespect,” in modern lingo], “NO SHADE.”

This stinks because of its dated sexism: 39a. [Part of some love triangles], OTHER WOMAN. People have traditionally thrown lots of blame on “the other woman” in scenarios that aren’t “love triangles,” as the clue would have it, but a dude in a committed relationship cheating on his partner with that other woman. Don’t blame the single woman first—save your disdain for the man who’s crapping all over his preexisting relationship.

16d. [Formal opening], DEAR SIR OR MADAM. This is also dated, because if you don’t know the people you’re writing to, you certainly don’t know that they aren’t non-binary. Has anyone come up with a good gender-neutral alternative to “sir” and “madam” for addressing someone whose name you don’t know? Don’t say “friendo,” as heard in No Country for Old Men. 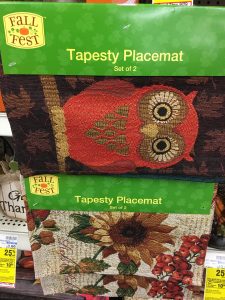 Tape…sty? (Spotted at CVS this afternoon. Not at RITE AID. We don’t have RITE AID stores around here.)

Did not know: 23a. [Bánh ___ (Vietnamese cake)], TET. Here’s the Wikipedia article on these glutinous rice concoctions. Make mine the bánh tét chuối, rice with a banana and sweet red bean filling. The next Vietnamese New Year is February 5—watch for your bánh tét then.

I finished the puzzle knowing essentially what the theme was, but not knowing what the title meant. We’re presented with several well-known(ish) phrases that have an S added to the front. All of these are in the Down direction.

“Why?” you ask. That’s where the title comes in. “Frequent Stops” should be re-parsed as “Frequent S-Tops,” i.e. we have numerous phrases that are topped (since they’re in the Down direction) with an S. Yes, that’s quite a groaner of a pun, but there’s more… 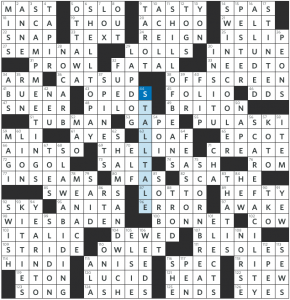 In the end, this is just an add-an-S theme which certainly isn’t original, but could be fun if done right. The theme entries were hit-or-miss for me, and I wish there was another element to tighten the theme up. Still, it’s not a bad Saturday outing.

If you want to get nit-picky about the theme, it would probably be more elegant if there were no other s-topped words in the grid. I’m looking at STINTED at 17d (which is a weird word, by the way, and is a more recognizable word without its S), SPINETS at 37d, SWISH at 92d, and others. But most solvers probably wouldn’t notice those. 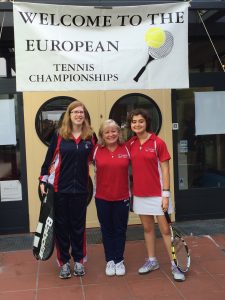 My daughter (right) with her coach and friend at a tennis tournament in WIESBADEN, Germany

Nine theme answers means fewer long non-theme fill entries. My favorite has to be WIESBADEN (98a, [German city nicknamed the “Nice of the North”]). I’ve been to both cities, and I don’t see it, but admittedly I spent very little time in either city. Nice was a stopover on a cruise, and we went to WIESBADEN only to watch our daughter play in a tennis tournament for American high schools in Europe, i.e. we didn’t really get to see much of the city.

Most of the grid is serviceable and works as intended. The prepositional phrases NEED TO, YEARN TO, FEAST ON, and SLID ON, stuck out a little bit as being duplicative, especially those first two. The crossing of PULASKI [Polish nobleman who led the American cavalry] and KOTO [13-string Japanese instrument] at the K was likely troublesome for more than a few solvers. Thankfully for me, my wife is from PULASKI County in Arkansas.

All in all, a fairly standard add-a-letter theme. A smaller number of theme answers might have allowed for some flashier fill. 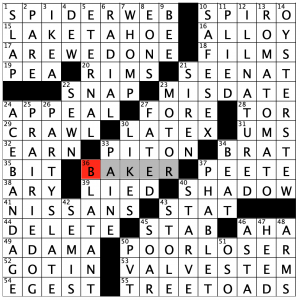 This puzzle took me a tad longer than a normal Saturday LAT. Surprisingly, it took me almost as long to finish this puzzle as it did the Stumper! (See review below!) I wonder sometimes if environment makes that huge of a difference in solving times. Maybe mindset as well? I am not always frantically rushing to solve, as if in tournament mode, but it is more of just spending several uninterrupted minutes in concentration. That is a large part of the joy for me; experiencing that zone is probably not to dissimilar to being engrossed in a great book.

I digress again! Gail has a great puzzle here, and there is a lot of fun stuff to talk about. 4.4 stars for a solid 72-worder.

What is there to discuss?

Have a great Saturday! 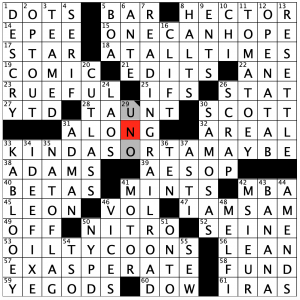 I think I am getting better at these! Another time under 10 minutes for me! When starting this puzzle, I actually found it a little easy, but then I got to some of the thorny parts, and it turned into an actual Stumper, although not a pull-your-hair-out-rage-inducing Stumper. A good start makes all the difference in a great time, and when you have a good foothold that helps a lot. I am used to staring at seas of white squares for more than a few moments when embarking on one of these Stumper solves, and of course that is NOT conducive to a good time! Like the LAT, this puzzle also contains 72 entries, but unlike the LAT, this one has crossing 15s in the middle. A solid 4.6 stars this week.

See you all on Tuesday, or perhaps in the chat if there is a Twitch stream this weekend!