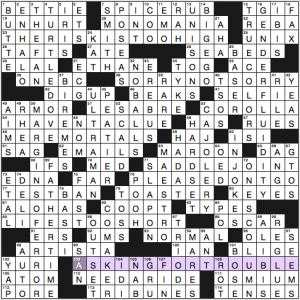 It’s a board game theme this week, with familiar (or not so familiar) phrases clued as if a key word is the name of a board game rather than a regular word. And the clue and answer are things someone might say when trying to select a game to play.

So I’m about 50/50 on this theme, which is not a good ratio. I do like the random long fill, though I kept trying to find game names in those. GENDER FLUIDITY, the ONES COLUMN (two letters off from being an OP-ED COLUMN—gotta read the clues), MERE MORTALS, FATHER TIME, TRUE COLORS, SPICE RUB.

3.25 stars from me. Some lovely fill wasn’t quite enough to offset the thematic struggles and the other fill that wasn’t to my liking.

Edited to add: After seeing a discussion of this clue on Twitter, I wanted to call out that [M –> F –> M] clue for GENDER FLUIDITY. It really misses the point. It’s maybe not an easy term to define concisely enough for a crossword clue, but this clue seems wedded to that M/F gender binary, and that’s entirely inconsistent with the concept of gender fluidity. It includes people who identify as non-binary, neutrois, male, female, and other. If you know anyone who’s non-binary, you know that they’re absolutely not flip-flopping as “male yesterday, female today, male again tomorrow.”

I figured out the theme on this one very early. It was still fairly challenging, since the theme answers aren’t signaled in any way, so each one felt like a little bit of a surprise – and I didn’t find one of them until I went back and looked. They are symmetrical, but I tend not to notice that kind of thing while I’m solving.

We have ten answers that leave something dangling. I’ve highlighted them in the grid. 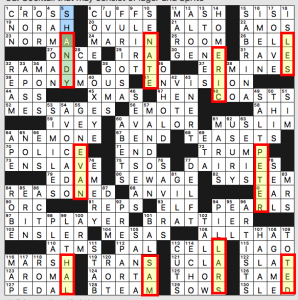 Evan (who used his own name in the puzzle!) ties it all up neatly at 57d [“There’s an injured soldier here!” … and a hint to 10 answers in this puzzle]. The answer is MAN DOWN because each of the names goes down.

I really like this theme. The small inconsistencies (some four-letter and some three-letter names, and some spanning two words while others don’t) do not bother me at all. It was fun and satisfying to solve.

What I didn’t know before I did this puzzle: see above re: Operation Neptune. I had also never heard of TV princess Elena or her kingdom, AVALOR. She is apparently a Disney princess who came on the scene long after my kid got too old for Disney princesses.

Each theme answer is a list of items in the same category; their first letters tell you what they are. All the clues are [Three types of (see circled letters)] 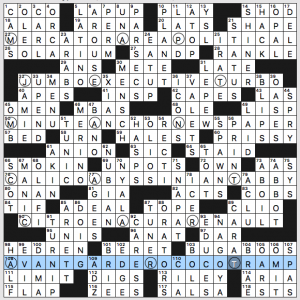 Not my favorite kind of theme, but it’s well done.

What I didn’t know before I did this puzzle: That OLAF I only ruled for five years.