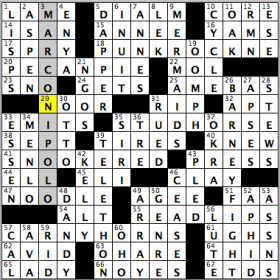 Good day, everybody! I hope the ides of October are treating you well at the moment. Today’s grid could have given solvers a little bit of a tougher time than expected — especially a couple of the theme entries — if one was not careful. In the homonymic theme, phrases and names are altered by adding letters to the end of one of the words, forming the sound similar to the word “knee.”

Not knowing LAMÉ off the bat and putting in “lace” right off the bat not only was lame, but it cost me some serious time in solving (1A: [Glittery fabric]). Even worse, I did not come off of my initial answer for a long while and made me doubt the “Marconi” portion was correct going down, even though it had to be. All that is to say that I’ve come across lamé in passing a few times, but it hadn’t been etched into my memory enough so that I would not have an issue with it. Other than that, and outside of putting in “ETAS” initially instead of ETDS, things flowed pretty smoothly (67A: [LAX postings]). Absolutely loved the entry of SNOOKERED (41A: [Deceived, slangily]).

I wonder if there was hidden shout out with this grid, with SEPT (38A: [Labor Day’s mo.]) and TELETHON both appearing, as connecting the two immediately made me think of the Jerry Lewis Telethon on Labor Day that I always remembered watching when I was younger (39D: [On-air fundraiser]). In New York City, the telethon aired many years of WWOR-TV, the same network that aired a number of New York Mets baseball games. Every time I would go to that channel on Labor  Day, I would see the telethon on instead. Even with the disappointment of not seeing a Mets game on, was always fascinated at the setup of the telethon when growing up. I’ll admit that I was tempted a couple of times to call the number, just to see if the people operating the phones who appeared on camera would pick up the phone as I dialed. I’m glad I did not follow through on that mischievous plan…sort of.

“Sports will make you smarter” moment of the day: PRESS (43A: [Use an iron]) – One of the top American soccer players in the country, Christen Press is a forward/striker on the United States Women’s National Team, making over 100 appearances in international play representing the USA while scoring 46 career international goals. In 2010, Press won the Hermann Trophy, awarded to the best collegiate soccer player. She made her debut with the senior national team in 2013 and, two years later, was a member of the 2015 team that won the 2015 FIFA Women’s World Cup in Canada. i

Thank you very much for your time, people! Have a great rest of your Tuesday and, as always, keep solving! 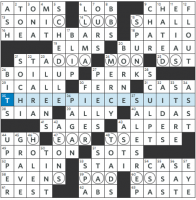 The WSJ makes use of its new circle-in-the-square functionality in a nice way. Each of the four suits is split in three parts across multiple entries in the same row. This can’t have been easy to put together, especially with having to find fill starting with TS and DS. I’ll admit that fill like LUB STADIA MON DST make me say UGH a bit, but I’ll take it for the overall payoff. I very much enjoyed the revealer and appreciated its prominence in the puzzle.

Because the theme entries were just pieced together portions of shorter fill, it was odd to have the longer fill be unrelated to the theme; in that way, parts of the puzzle felt a bit like a themeless, which I’m not so mad about. I especially like how it allowed for tasty fill like HEATHBARS. I appreciated the double dip in chemistry with ATOMS and PROTON and was glad for a mostly clean grid, though some of the theme constraints showed in the fill around theme entries.

#includemorewomen: Not only do we have wayyyy more men than women in today’s puzzle, the men in the puzzle are largely outdated; both are dings against the puzzle for me. We have MON SIAN ALDAS ALPERT PALIN (one of the) ALLENS ELIAS vs. just Gracie ALLEN. Seriously, I’m the most liberal dude in the world, but I’d even take PALIN clued with respect to politician Sarah just to get a bit more gender balance in the representation of the puzzle. Many dudes vs. half a piece of fill to represent women isn’t a great look. 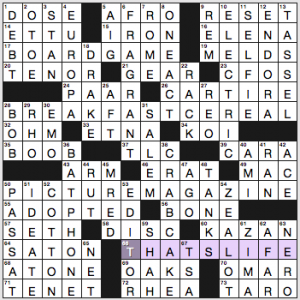 This is a little like those “the theme answers are more like clues for a short answer” themes I don’t care for. “THAT’S LIFE” is clued 66a. [Comment of resignation applicable to 17-, 28- and 50-Across?], and LIFE could be the answer to these three theme answers, if they were used instead as clues:

I moved through most of this puzzle eyeballing some Across clues and then filling in the crossing Downs one after the other. So it played like an easy puzzle. I have some concerns, though. Why, in a Tuesday puzzle, would you clue ATONE as the awkward and incomplete AT ONE (with)? 68a. [Agreeing (with)], really? Especially when ONE-ACT repeats the answer’s ONE, there’s no earthly reason not to clue it in the “make amends (for)” sense of ATONE. That crossing awkward IDEATE at the T, also not so hot. 27d. [Competitor of the Essex or Hupmobile], REO? Dust and cobwebs.

Not too keen on the lower right corner, where three dudes (KAZAN OMAR NERO) intersect with “Why??” ZIMA and uncommon-in-the-mainland TARO. Could tweak that corner to have GALAS, OVAL, and (meh) prefix TERA crossing LIVE AFAR SELA, replacing three men and a brand name with one woman and some common words. 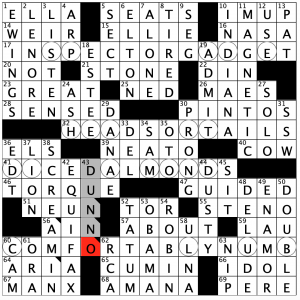 Card play is at play here! I think I have said this in a blog post recently, but I am in the mood to play some cards! What am I talking about? Notice the words in the circled squares, which I will highlight in red:

I was thinking it would be nice if the suits were in order, as suits are ranked in bridge, for example. And guess what? They ARE in ranked order in this puzzle! Nice little feature there, especially if you’re familiar with bridge rules. Bridge always fascinated me, but I don’t have three friends who know how to play! It’s a good thing I have crosswords to keep me company! Strangely, I didn’t find the usual obscure-pop-culture-reference in this week’s puzzle, meaning I must be hipper than I thought this week! The most obscure is probably the Pink Floyd song, but I have heard of it, even if I don’t know song right offhand. 4.3 stars for another fine Jonesin’!

May everyone have a great week! 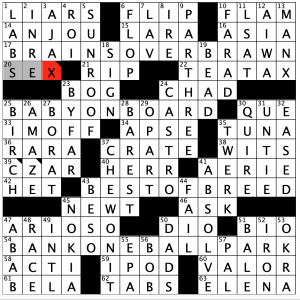 Abbie Higashi is a name that is not already in the constructor database for this site, leading me to the conclusion that this may be a debut crossword! Simple enough theme, and once again, I was solving so quickly that the theme escaped me for a minute. It should have been abundantly clear after the second theme answer, but to clear up any ambiguity, there is actually a revealer that crosses the last theme entry!

Yes, each answer has the initials BOB. As mentioned, quite simple, yet still elegant. I said I was solving quickly, so ignore the mistakes (typos?) in the grid image! If this is indeed a debut puzzle, it is a mighty fine debut, and kudos to the constructors! 4.6 stars from me.