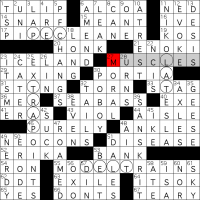 hello and welcome to episode #541 of matt gaffney’s weekly crossword contest, “Brains Over Brawn”. for this week 2 puzzle, matt asks us, Which two entries in this grid combine to make a good title for the puzzle? okay. what are the theme answers? there are four long entries in the grid in a pinwheel pattern:

based on the title and the presence of {Bodybuilder’s pride} MUSCLES in the grid, i hit on the theme pretty quickly. i’ve highlighted them in the grid, but each of these two-word phrases contains the informal shortened name of a muscle across the word break: PEC(toral), DELT(oid), LAT(issimus), and TRAP(ezius). i’ve never heard trap used in this context, but it was inferable.

so definitely MUSCLES is going to be part of the answer. what other word pairs with MUSCLES that would make a good title? this was the least satisfying part of the meta solve for me. i settled on TORN MUSCLES, because that’s an actual phrase, and i guess you could say that putting the muscle name across the word break is “tearing”, but it didn’t quite click for me the way it would have for, say, BROKEN BONES (hey, there’s a meta idea), because we call that division a word break, not a tear. but i sent it in and it seems to have been right. there weren’t a lot of other options; maybe ANKLES and DISEASE are at least potentially anatomy-related, but neither one of them really makes a phrase with MUSCLES. (MUSCLE DISEASE sounds like it could be a thing, but MUSCLES DISEASE not so much.) did anybody try a different answer with MUSCLES?

not much else to say about this one. i thought the fill was nice, with PF CHANG’S and SANSKRIT beautifully anchoring two sections of the grid. {The L of LMM} for LIN-manuel miranda looks like a shameless attempt to curry favor with the blogger, and what can i say—it worked. thumbs-up to this one.

that’s all for me. what did you think of this one?