This is an easy puzzle with a complicated theme that I could not figure out. Thanks to Jim P and Andy for the help.

I realized it was a letter substitution theme when I filled in 27a [Ripped off cheap phones ten times?], which is STOLE BURNERS (stove burners). Not that anyone actually calls them “stove burners” but they are definitely a thing. I couldn’t think of the base phrases for the other theme answers and didn’t understand why we put L  for V, so I couldn’t work off a pattern. I consulted the title and was not enlightened.

Turns out this is two of my least favorite crossword things combined. It’s cryptic-style clues with Roman numerals. Each base phrase has a letter that is also a Roman numeral. The title tells us we have to multiply, and the clue tells us what number to multiply it by to get the substitute letter. So V from “stove” is multiplied by ten to get L and make “stole.” 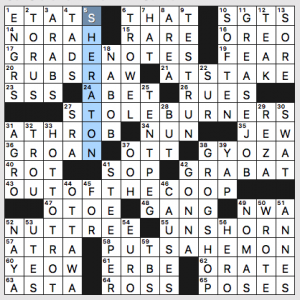 I solved it by dividing, not multiplying, to get the base phrase from the entry in the grid, and the cluing seems backward to me. Aren’t we multiplying the base phrase, not the wacky entry that results from the multiplication? So many reasons I did not enjoy this theme.

What I didn’t know before I did this puzzle: that SHERATON was the sister chain of Ritz-Carlton. 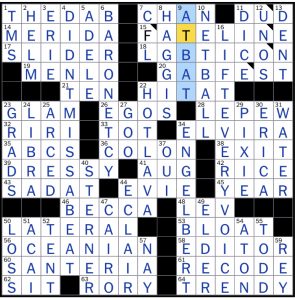 Ben here, filling in for Andy.  Erik Agard has this week’s NYT puzzle and I really dig its theme.

This clip of Lizzo from Samantha Bee’s (excellent) Full Frontal was one of the first performances of “LIFT EVERY VOICE and Sing” I was aware of, and it was the first thing that came to mind when I saw the clue for the “black national anthem”.  It’s a great song, and an immediate hint as to what’s going on in the clues it highlights (at least for someone who grew up singing in choirs).  Each contains a “voice” being lifted – BASS, TENOR, ALTO, and TREBLE (in lieu of the trickier-to-hide SOPRANO)

As Andy did a great job of pointing out last week, Thursday is generally the day when the NYT shows what can be done with the form (and in some cases, the function) of the crossword.  This is a nice little switch up on where the theme clues pop up, and it was a well-executed puzzle – I liked learning THE DAB is banned in Saudi Arabia, seeing ELVIRA clued in a way that involved neither cheesy horror movies nor the Oak Ridge Boys, and some of the other more contemporary fill like SANTERIA, LGBT ICON, and tech news site RECODE.

If you hadn’t noticed (which I hadn’t until today), there’s been a loose nautical theme pervading this week’s WSJ puzzles. On Monday we had words that could follow WATER. Tuesday’s puzzle was called “Decked Out.” Though it was about decks of cards, it’s worth noting that boats have decks. Yesterday’s puzzle had boats going backwards in other phrases, and today we have a grid entitled “Sea Going.” Most appropriately, it was crafted by someone with “water” in his name.

71a is CLEFT, but it needs to be re-parsed as C LEFT, because the clue [Crevice, and, interpreted differently, what happened to five of this puzzle’s answers] tells us that the letter C has been removed in the theme answers. Further, as a point of consistency, all the Cs that were removed were followed by Ls. Not sure why L was chosen — there doesn’t seem to be a reason — but at least it’s an attempt to tighten up the theme. 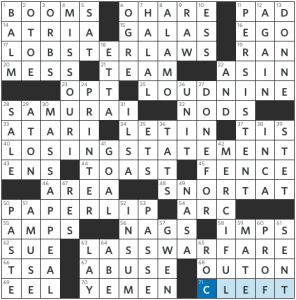 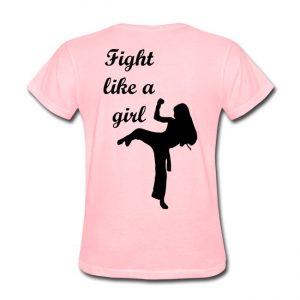 Nothing here tickled my funny bone. And by Thursday, it would be nice to see something tricky or different or adventurous. This isn’t really any of those things. I’m not faulting the puzzle for that, but it just doesn’t seem Thursdayish. If it was at least a bit more humorous, that might make up for it.

While the theme may not have been so engaging, the fill is nice. I liked seeing PERSISTENT with all its recent female-empowering connotations. MASS APPEAL is good as well and DONE FOR and MERCIFUL make for a nice combo in the SE. Oh, and SAMURAI is fun. Nothing made me wince, so that’s a good thing, though the ETS / ENS / ESS trio isn’t fun.

Cluing seemed pretty straightforward for a Thursday. (I don’t usually time myself, but I was cruising along pretty well, so I made an effort. Note that my time is using the cludgy WSJ website interface.) In fact I filled in five of the first six Across answers immediately, which usually doesn’t happen on a Thursday. I’m not complaining, but I know some people want/expect a harder grid towards the end of the week. I didn’t see any clues that stuck out to me in a notable way, but [Tender spot?] for GOAL is cute.

That’s it from me. I’d put this at about 3 and a quarter. 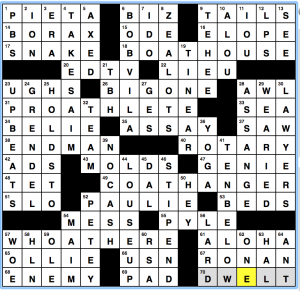 It’s a doozy of a Thursday here in Boston, so let’s knock this BEQ out.  Today we’re committing perjury, courtesy Brendan.  What that means:

Each of these answers features an OATH.  Perjury is lying under oath.  If you look underneath each OATH in the grid, you’ll find that there’s a LIE — LIEU, BELIE, PAULIE, and OLLIE 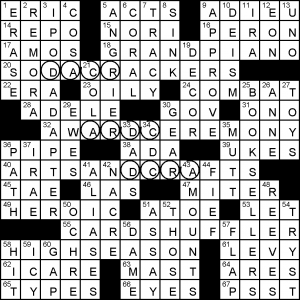 I wonder if this puzzle is supposed to have circles. My copy didn’t, though I added them to the solution for ease of reference. The theme is revealed at CARDSHUFFLER, and three other answers have CARD shuffled across two words of their theme. A well-trodden theme part at this point, but cleanly done, and I appreciate there only being four parts to the theme, given their difficult lengths. Our themers are: SO(DACR)ACKERS – nah so; AW(ARDC)EREMONY and ARTSAN(DCRA)FTS.