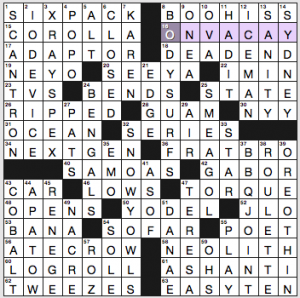 I suspect this puzzle will be polarizing, as traditionalist solvers grumble about the more adventurous fill and others find that the freshness really hits the spot. Me, I am waiting for vacay (short for vacation) to be in wider use so I can use it without people looking at me funny—and Trenton including ON VACAY as an entry helps the cause. FRAT BRO and BBQ JOINT have the same colloquial vibe as ON VACAY. NEXT-GEN, too, and RIPPED clued as [Seriously muscular]. Gonna call foul on the singular OREO THIN, because the cookies are Oreo Thins in the plural, and they’re so thin and crispy that you can eat more of them. (I had four lemon Oreo Thins after solving this puzzle. That’s 140 calories. The rest of the family loves the salted caramel Oreo Thins, but I could do without.) (And then you’ve got the plural SAMOAS, Girl Scout Cookies, but meh. Not a fan.)

Four stars for this puzzle that took me 1 second less than the Wednesday puzzle—which people said should have been a Monday or Tuesday puzzle. 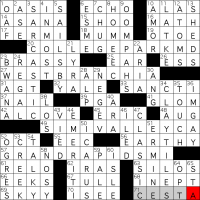 hello, joon here filling in for laura, who’s away at a conference this week. sarah keller’s CHE puzzle is a straightforward homage to four presidential libraries… sort of. maybe somebody else will step in to explain what’s going on with the theme, because i think i must be missing something. here are the theme answers:

and then there’s COLLEGE PARK. now, nixon’s presidential library isn’t in college park. his museum isn’t either. they are both in yorba linda, california. what is college park doing in the theme? is there some other wordplay connection between these four towns that ties it all together? because unless there is something else, to me this theme looks like a non-starter.

speaking of COLLEGE PARK, MD, though: university of maryland alum/fiend blogger/tournament champion/constructor/all-around crossword superstar erik agard is on jeopardy! today (and, i hope, every day for a good long while!). i can’t wait to see how he does!

other bits from the fill:

overall, i have to admit that i didn’t really care for this puzzle. the inconsistent theme was a huge turn-off, but the fill also made me wince more than smile. i’ve enjoyed sarah keller’s puzzles in the past, and i hope and expect that i will enjoy her next offering more than this one. 2.6 stars. 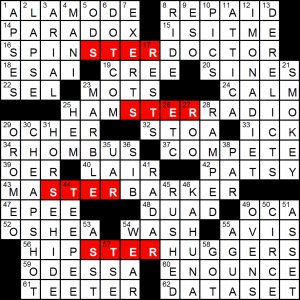 I’ve had a bit of a rougher day than usual, including three hit by car cases and a boerboel whose nose I had to attempt to rebuild after it basically cleaved in twain by a panga (machete) – it also had another laceration just above that went about four centimetres through its face but was stopped by the tough skull… So yeah crossword escape here I come.

This was a better than average letter addition Friday I feel. Yes, there is nothing tying things together, but STER is an interesting “suffix” in that none of the new words have much to do with their original forms (with the exception of HIP(STER)) which made for quite strong images, my favourite being HAMSTERRADIO. It evoked stand-up Bill Bailey’s “I got ham but I’m not a hamster,” dig at Brandon Flowers.

The 14/12/12/14 arrangement forced an unusual grid with big corners. There are some interesting long downs my favourite being IMONADIET and CHEAPSHOT. HORSEHIDE is new to me, but amusing nonetheless, being, allegedly a word for a baseball, presumably akin to pigskin? [Ones neglecting their duties] is an awkward clue for DERELICTS, but I’m guessing the call was made to avoid the more in-use, but pejorative term for homeless people?

The bottom-right was definitely the weakest corner, with old-skool OCA, blah ENOUNCE and convenient bottom DATASET.

P.S., I just realised I have been totally, unbelievably rude. I actually don’t all wrote the LA Times blogs while I was away in the Free State, but thank you each and every one of you. I appreciate it, although it may not have seemed so.