A light and breezy puzzle from Evan today where the wordplay comes in the cluing.

THEME: Common two-word phrases (in the clues) are reimagined as if they were verbal utterances. 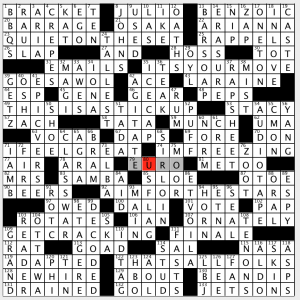 Fun, consistent puzzle. I’m often prepared for something quirky in the grid with the WaPo, but it’s not an unwelcome change of pace for something more traditional. It seems as though great attention is given to ensure that the same style of puzzle is not repeated week after week. 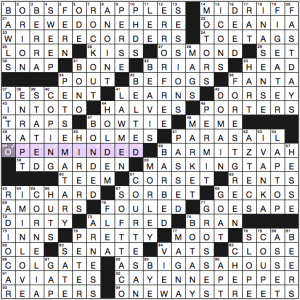 Oh, hey! A jumbo themeless puzzle, and it’s from Patrick Berry? I’m sold. It’s a gorgeous grid, with stacked 13s, two expanses of stair-stepped 6s (you don’t see that much!) with long fill at the ends, lots of juicy entries. And then, for good measure, lots of clever Berry clues.

My list of favorite fill will be much longer than in a themed 21x: BOBS FOR APPLES, “ARE WE DONE HERE?” (I had “… FINISHED” first), KATIE HOLMES, OPEN-MINDED, BAR MITZVAH, TD GARDEN, CAYENNE PEPPER, PET SEMATARY, ROCK OUT, SOFT TACO, FAST DAYS, and FOREST GREEN.

The whole venture gets a thumbs-up from me. Berry-grade themeless smoothness, at twice the size of the standard themeless. 4.5 stars. 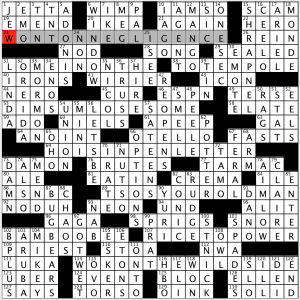 Jokes with a Chinese restaurant menu theme; some of them are rather corny, but they fit (like those little baby corns you get in vegetable stir-fry):

LETS BE frank: the crossing of ESKER and STOA was rough and crosswordese-y, but most of the fill was smooth, as befits BEQ. One of 21 women currently serving in the US Senate, incumbent [79d: Senator McCaskill]: CLAIRE is running a tight race in Missouri against Republican challenger Josh Hawley. Don’t forget to vote this Tuesday, November 6.

Here’s the grid for LAT – sorry it’s so late. The theme is two-word pairs that start with successive letters of the alphabet, arranged from A in the top left to Z in the bottom right. Lots of theme answers. Kind of icky fill. 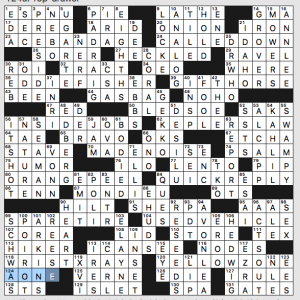