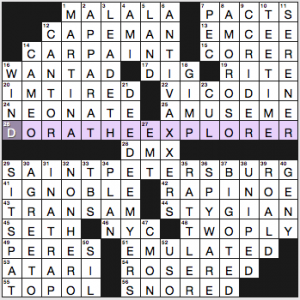 Weird-looking 62-word grid, with just the three squares in the middle row connecting the two halves. The fill is better than I’d expect for that word count—NONHERO, the contrived IN A TRAP and “AMUSE ME” (not sure if CAR PAINT is contrived or good), uncommon UNIPED, and the who-uses-this-form-of-the-word SERENER are the lowlights, but the rest of the fill ranges from solid to sparkling.

I worked through all the names in the puzzle with no trouble, but I’m good with names. Those of you who shrink from proper nouns (“trivia”) may have foundered a bit.

I eventually finished this grid with no clue as to the theme. It wasn’t until after I went for a drive to pick up my daughter from school that it came to me.

The revealer, CROSS THE AISLE, is appropriately going straight down the middle of the grid. It’s clued as [Eschew partisanship, as illustrated eight times in this puzzle]. This seemed to indicate to me that things were moving left to right or right to left, but I couldn’t seem to make that happen with the entries. I kept looking for REP or DEM or even IND, but those aren’t to be found. What I eventually realized was that Rs became Ds and Ds became Rs. I’m not sure that this is really indicative of bipartisanship or “crossing the aisle” — after all, being able to work together to come up with a compromise doesn’t mean you’re switching teams for good — but I guess it makes an interesting basis for a puzzle.

For whatever reason, there are two instances of change going on in each answer. 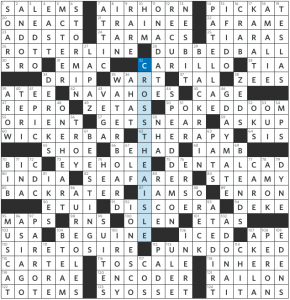 Obviously, the theme gave me fits while solving because I never figured it out. And once I did, the a-ha moment wasn’t that momentous. Another reason I’m only feeling so-so about the theme is that nothing here tickled my funny bone.

There were also some eyebrow-raisers. WATERBOARD does not evoke a pleasant image. I didn’t know ONE HEART (neither the Bridge bid nor the song). A hotel door has a PEEPHOLE, not an EYE HOLE, in my book. And NAVAHOES looks plain weird without the J and with an ES. If it were up to me, I’d spell it Navajos. But I guess it could go either way.

And that brings us to the “No” column, in which we find BE HAD [Fall victim to a con]. I’m sorry, but just “No” to that. And then there was the whole IONESCO/ BEGUINE/AUREOLES/SYOSSET/OLEN pile-up. Feel free to throw in crosswordese ETUI in there as well. That took some doing to unravel. Way, way, way too many proper names and obscurities crossing there. And that clue for BEGUINE (which I didn’t know, btw)? [Fox trot relative]? Why is there a space between fox and trot. Google it. You’ll be hard pressed to find the dance ever written that way. Oh, and one more tough crossing: MCTEER [“Albert Nobbs” Oscar nominee Janet] and EMAC [Apple aimed at the school market]. How many people finished with an I instead of an E there? Count me as one. (And NESBIT crossing both CARILLO and TAL is yet another potential pitfall.)

But despite a few good clues and some lovely fill, there were a lot of negatives here that stole the show. Unfortunately for me, the theme wasn’t able to rise above it all. 2.9 stars. 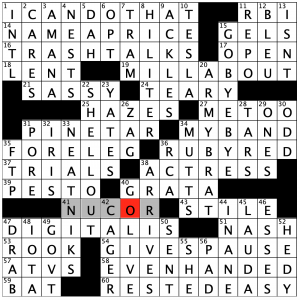 Fast time this week! Amazingly, as the Stumper killed me (see below), this one fell easily. Sometimes you are in the zone, sometimes not! I have seen enough of Brian Paquin’s puzzles to recognize the byline, but a great puzzle nonetheless. I truly had fun solving this one! A solid 4.2 stars this week.

I will stop here. Have a great day, everyone! 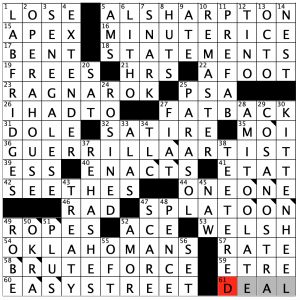 Nice! Our recent favorite Jeopardy! contestant has this week’s Stumper, and this one certainly stumped me. I haven’t been feeling the best, but for some reason I just couldn’t get some of these answers this week, some of which I have never heard of. Some of them I certainly knew, but came after waaay too long of a time. Did I mention I am on cold medicine? 4.6 stars for a truly “stumping” Stumper, in my opinion!

I could go on, but I have a busy weekend! Go Blue!