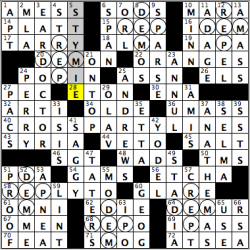 Good morning, every body! I hope all is well with you on this massive, massive, massive day in this country’s history! (Did I say today was massive?) In the off chance that you did not know/remember that today is Election Day, today’s offering might have jogged your memory. If so, after you read this blog entry — and I thank you so much for reading — head to the voting booth!

In today’s grid, a number of intersecting entries feature circles, with all of those circles spelling out either DEM or REP while crossing at the shared “E” in the middle. (So does that make the “E” a political centrist?) The reveal happens to be smack dab in the middle, CROSS PARTY LINES (40A: [Collaborate in Congress…or what the arrangements of circled letters in this puzzle appear to do]).

Anyone else thought it was more than just coincidence that VETO appeared immediately below the theme of “cross party lines?” (44A: [Presidential power]). I’m certain it was a coincidence, but I’d like to think that it was some real clever grid making that made that happen! Though I did not notice the appearance of TARRY because I had solved it using its crossings and did not see its clue until after I finished solving, could not help but wonder if I personally have ever used that word before (17A: [Linger too long]). There are some who lament seeing dated language in a grid, but I normally welcome that, especially since I use some dated language/pop culture in my feature writing even though I know a good chunk of my target audience steers younger. Loved the fill of ANATHEMAS because it’s a wonderful word/fill and because, I believe, it’s the first time I’ve ever come across the pluralized version of it (37D: [Detested things]). Also something I noticed is the amount of entries that ended in a double S, including A MESS (1A: [Make _____ of (bungle)]), UMASS (36A: [Amherst sch.]) and I PASS, let alone the two S’s that end the first word of the reveal (69A: [Bridge game call]). There are many more noteworthy sights to behold in the grid, and I’ve highlighted some of them, but it’s so funny what one’s eyes pick up when solving grid after grid, day after day. Let’s close with some sportsball, shall we?!

“Sports will make you smarter” moment of the day: MARA (10A: [“The Martian” actress Kate]) – Many in the non-sports world are familiar with Kate Mara’s acting exploits, but did you know she is from American football royalty? Kate is a great granddaughter of the men who founded both the New York Giants (Tim Mara) and Pittsburgh Steelers (Art Rooney Sr.). Her grandfather was Wellington Mara, who owned the New York Giants from 1959 until his passing in 2005. Speaking of Wellington, every regulation NFL football has the phrase “The Duke” branded on the left side of the ball in honor of Wellington since a) he was an instrumental figure in the growth and popularity of pro football in America and b) “Duke” was his nickname, as he was named “Wellington” after the Duke of Wellington by his father, Tim. 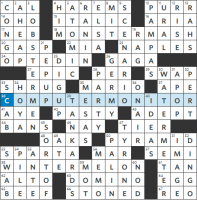 What a timely grid! The title of today’s puzzle is quite literal with respect to the theme: “Midterms” tells us that TERM is midway through each themer:

18A: MONSTER MASH [1962 novelty hit that starts “I was working in the lab late one night”]
38A: COMPUTER MONITOR [Cursor’s spot] – And you’ll be cursing yourself if you don’t vote!
58A: WINTER MELON [Casaba or honeydew]
3D: LOBSTER MEN [Some Maine trappers] – Only some because others aren’t men! That’s how you write an inclusive clue, even if the term in your grid is inherently gendered.
30D: WATER METER [It’s read by the utility company]

Straightforward theme with nice theme density, and not much icky fill to counterbalance it. There is a slight dupe at PEP UP / DIG UP, but it’s otherwise quite a clean grid. And, this might be small, but I also enjoyed the PER/APOP, AYE/NAY, and ARIA/ALTO connections in the grid. Puzzles like this make me PURR with delight. No BEEF here! :)

#includemorewomen: Know what the women of this puzzle want you to do on Tuesday? MIA/Emma Stone, GAGA, ELSA Lanchester, and PALIN want you to vote! And to make sure everyone you know who is eligible to vote will also be voting on Tuesday if they haven’t already!

Also, is [Women’s rooms, in sultans’ palaces] the most euphemistic way to describe HAREMS ever? 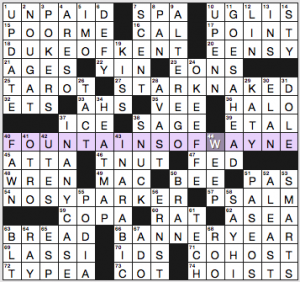 Oh, look! Another Election Day NYT puzzle with Bob DOLE in it! Except this time, he’s just ballast fill and not part of the first Schrödinger puzzle of the Shortz era. I’m still charmed by Dole’s appearance in the documentary Wordplay. Said something like “The whole election of 1996 was a puzzle to me.”

The theme is male superhero ALTER EGOs: 9d. [Secondary identity … or what can be found in 18-, 27-, 40-, 54- and 66-Across]. Clark Kent, Tony Stark, Bruce Wayne, Peter Parker, Bruce Banner. Shame there’s no PRINCE themer to engage Wonder Woman, aka Diana Prince, because All Dudes All the Time is boring. (The upcoming Captain Marvel movie is about a superhero whose alter ego is Carol Danvers, but good luck finding a phrase that contains DANVERS.)

Cute theme, if a bit too dudely.

I wasn’t wild about all of the fill (UGLIS EENSY VEE ATTA), but it played like a Tuesday puzzle, and theme is poppy and fun. Four stars from me. 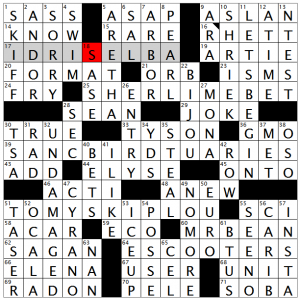 This puzzle actually hits home, even though I was unfamiliar with most of what the theme is talking about! Let me list the themers first:

If you are not familiar with these services, Skip Scooters can be found at this website, Bird is here, and Lime is at this one. Here in the greater South Bend area, we don’t have scooters, but we have Lime Bikes. Around downtown SB and the Notre Dame campus, they are EVERYWHERE, and I think that is the joke of this puzzle is that people park these things anywhere they please. My other big question: why don’t we have the SCOOTERS in South Bend? That looks like WAAAAY more fun than a bike! I have never ridden one of these, but one day soon I will just to say I did. OK, not too soon, since winter is on the way, but doggone it those bikes are still omnipresent in the snowy season! 4.4 stars for Matt’s puzzle today. 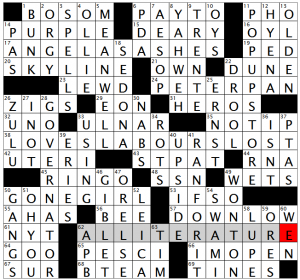 This is not a byline I am familiar with, but still a fairly straightforward Tuesday puzzle, but I have one major gripe. Let me list the theme entries, including the revealer, and then I will lodge my argument:

I like the use of the portmanteau word at 62A; it is actually a phenomenal entry. But alliteration should only involve CONSONANTS!!

17A is not an example of alliteration, but a type of assonance. I get that these are all titles with repeating letters, but I was taught there was a major difference decades ago in elementary school. Other than that, a stellar puzzle with lots of fun stuff in it. 3.8 stars from me.

That is all! More from me on Saturday.