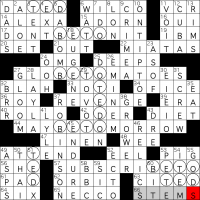 hello and welcome to episode #544 of matt gaffney’s weekly crossword contest, “Ballot Boxes”. for this week 1 puzzle ending on election day, i chose to solve it without the meta instructions, as i often do for week 1 puzzles. what are the theme answers? well, there are four long across answers:

so these four long answers all contain the string BETO. given the puzzle’s title and timing, i immediately thought the answer was beto o’rourke, democratic candidate for senator from texas. but before submitting, i checked the actual instructions and saw that matt was looking for a U.S. state. okay, so texas it is, but i was surprised to see matt apparently expressing a political preference in this high-profile race. but then i took a closer look at the grid and found four instances of BETO’s republican opponent, TED cruz:

so the puzzle is even-handed in a sense, with four appearances each by the two candidates. that’s fitting for a race that appears to be pretty much a dead heat heading into election day. BETO appears in the longer answers, but that is largely unavoidable, i think—four-letter answers are just a lot harder to hide than three-letter answers, so you generally need to hide them in a longer phrase. as an additional consideration, hiding the four TEDs in the longer answers would have been a lot less conspicuous, probably pushing the difficulty level higher than matt typically aims for in week 1. (and for topicality, this puzzle had to run this week.) even harder would be having, say, two BETOs and two TEDs in the theme answers, because then neither one looks like a pattern.

one modification of this idea could have been week 1-easy: have the theme answers all be phrases containing both BETO and TED. in that case, though, i think matt would have had to resort to wacky invented phrases; there aren’t any existing entries matching that pattern in my word list.

that’s all i’ve got this week. i hope everybody eligible exercises {Laura Nyro’s “The Right ___”} TO VOTE today!