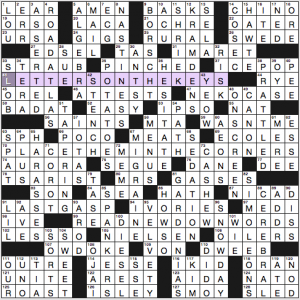 It’s a contest puzzle with a deadline of Tuesday, so no spoilers on the meta. But the puzzle solution wasn’t locked, so the solution grid is fair game. The contest is definitely on the easier end of the spectrum—in Matt Gaffney’s Weekly Crossword Contest terms, this would be a Week 1, the easiest in the month. In escape room terms, this is way easier than any of the steps in the puzzles in the two escape rooms I’ve done. (Only two! I know. I need to do more.)

Here are the long answers:

I had some squares circled, but removed those marks from my solution grid to avoid giving away any more. The puzzle notes are awfully verbose: This crossword represents an escape room, with four articles you’ll need hidden inside. After you complete the grid, follow the directions at 41-, 70- and 99-Across to find what to do next. Working correctly will lead you to a four-word phrase with a total of 12 letters. That is your answer. ¶ When you have it, send it by email to: crosswordcontest@nytimes.com. Twenty-five correct solvers, chosen at random, whose entries are received by 6 p.m. Eastern time on Tuesday, Nov. 13, will receive copies of The New York Times Crossword Puzzles 2019 Day-to-Day Calendar, from Andrews McMeel. Only one entry per person. The answer and contest solution will appear next week. The winners’ names will appear in the issue of Dec. 2. 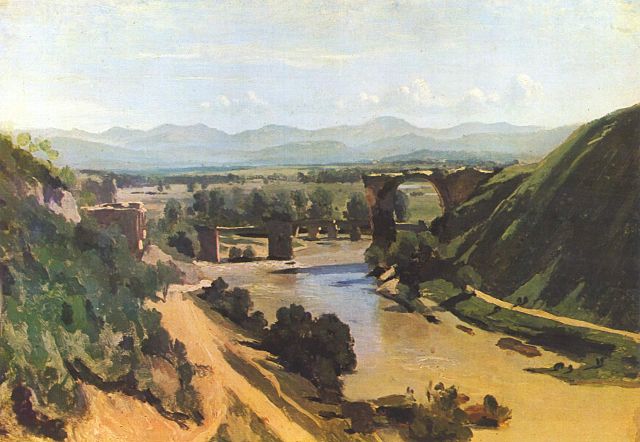 3.75 stars from me. I prefer my contest puzzles to pose more challenge, but I know that isn’t a universal preference. 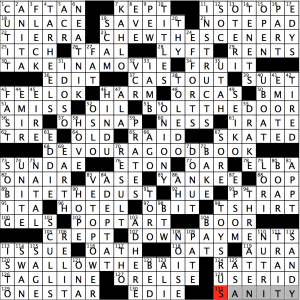 Patti Varol, certainly one of the five best living crossword makers, found the time in between editing puzzle packs and constructing tournament puzzles and what have you to bring us this toothsome Sunday puzzle, in which common phrases have been repurposed to describe the curious dietary habits of certain professionals, like so:

Not a bad theme answer in that bunch, and not much bad fill either: I would say HOVE is obscure for non-sailing solvers such as myself, I don’t buy ACR. as an abbreviation, and there’s the across-the-pond crosswordese ETON and EIRE, but that’s all I can work up any animus towards. In contrast, answers like ISOTOPE, SAVE IT, OH SNAP, SUNDAE, POP TART, TAGLINE, TAR HEELS, NEATNIK, VETO POWER, KAHLO, and TOYS “R” US made this an engaging solve from start to finish. More please!

Classic theme in the WaPo today: “I” becomes “U” and wackiness ensues.

With a classic theme type like this, all of the theme answers need to land. And they do here. Mostly, anyway. I can’t say that I laughed out loud at any of them, but that may be asking too much. CLUCK HOLE took me the longest since I was unfamiliar with ClickHole (I assume it’s referring to the site run by The Onion). Otherwise, this was as straightforward as they get from Evan, who is consistently providing variety in his themes.

In my AT BAT, this crossword was right over the plate. Not a bad thing at all. We can’t expect knuckle-balls all the time. 3.1 stars from me. 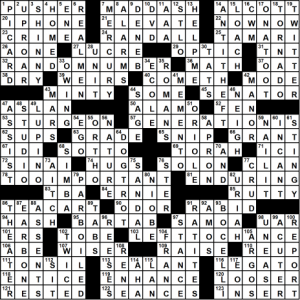 Some solvers, famously or infamously, do not like quip puzzles. Fortunately for Emily and Henry, I’m not one of those. I liked this puzzle, which is aptly titled “Chaos Theory.” In it, a multi-part clue (beginning with 32a. [Start of a title by Robert Coveyou]) leads to the following rolling out into the grid:

RANDOM NUMBER / GENERATION IS / TOO IMPORTANT / TO BE / LEFT TO CHANCE.

36a. [Coveyou’s field], MATH, balances out the symmetry of the theme answers. It’s not earthshakingly funny, and it’s not a best-selling book. It is, rather, a 1970 article in the journal Studies in Applied Mathematics. And it’s clever, ironic, and smile-provoking–for me, anyway, … and I wish I’d sussed it out for a puzzle before they did.

OTOH, 67a [A mean Amin] IDI is no longer in my wheelhouse, as I deleted IDI and AMIN when Amy was my editor a few years ago. I do understand the thought, though, that even the negative guys in history are fair game in crosswords, as long as they’re clued as non-heroic.

I wish the authors would have avoided crossing BARTAB with TABS 95A/89D, but … maybe that’s just me.

All in all, I enjoyed the solve. It took me about 25 minutes on the P.C. using AcrossLite. I’d rate it a solid 3.5 for middle-of-the-road difficulty and above-average enjoyment.