A nice debut puzzle for Kathy Bloomer! Deb Amlen’s Wordplay blog tells us that that Kathy is a retired pediatric hospitalist who has always loved diagramless crosswords. Welcome, Kathy! I hope to see more of your work – I really liked this one.

When I saw KEELS OVER at 17a and then the first theme entry at 20a, I thought they were connected. I’m kind of glad they weren’t. Here are the themers: 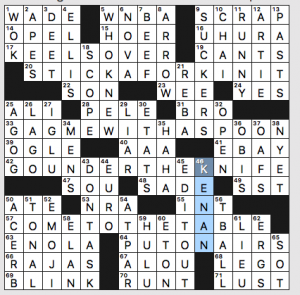 A solid, consistent theme; all the entries are in the language, one made me laugh, and the revealer is clear but not obvious. It’s definitely a Monday puzzle and it was still fun. This is not easy to do.

What I didn’t know before I did this puzzle: I’d never heard of KENAN Thompson. My SNL-watching days ended sometime around 1980.

Yesterday’s NYT had an escape room theme with a meta (there’s still time if you haven’t submitted). Is this one going to be similar? In a word, no.

The revealer is LIFT GATE at 37d clued with [Rear device for an SUV, or what the answers to 3-, 9-, 17- and 27-Down all have]. Each answer has the letter string GATE appearing in the up direction. Does that mean the GATE is being lifted? Eh? Maybe? 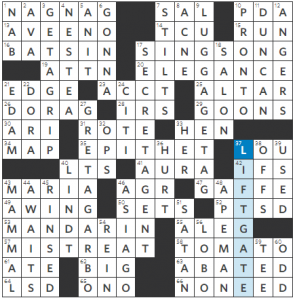 A superb themeset, elegantly chosen such that each “GATE” is broken up differently in each entry. Very nice.

Nice fill, too, as usual from Zhouqin. Nothing in the very long category, but some sparkly 8s: SING-SONG, ELEGANCE, and MANDARIN, along with the central EPITHET. I also like “NAG, NAG“, “PRONTO!,” and DUNCAN.

The only eyebrow-raisers are AWING [Blowing away] because (1) no one ever uses that word and (2) it just looks weird and AGR [Cabinet dept. concerned with farming] because Agriculture is usually abbreviated with just Ag or Agri.

Everything else is good. Hidden word themes don’t thrill me so much, but this is expertly put together with a good themeset and nice fill. 3.5 stars. 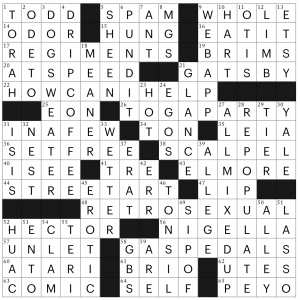 Like last week, this puzzle is missing a little bit of the “special sauce” that makes a New Yorker puzzle a New Yorker puzzle for me.  There were a few entries that felt like they fit the bill here, but my solve was a little too smooth and I wasn’t really thrown off by any one corner.  The New Yorker usually makes me put of a fight somewhere in the grid, and that just didn’t happen today. 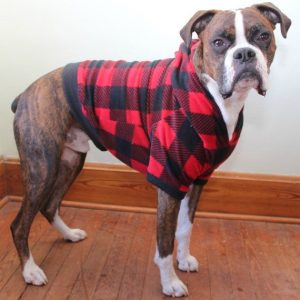 Elsewhere in the fill: GATSBY is Carraway’s Neighbor, HOW CAN I HELP is a nice bit of fill, as is TOGA PARTY.  Please tell me that RETROSEXUAL is not an actual thing, because anyone “channeling their inner Don Draper” in the year of our Lord 2018 should have their martini thrown in their face.  OTIS (Redding) wrote “Aretha’s signature song” (that’d be “Respect”, BTW).  GBS is the “‘Man and Superman’ monogram” – that’d be George Bernard Shaw, if you were as confused as I was by that piece of fill.

This was another week where the New Yorker puzzle felt like it could have run in another venue without issue, which is fine, but only just fine. 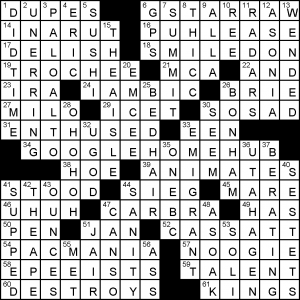 A lot of the difficulty in a typical BEQ themeless Monday for me is not the clues, which are mostly pretty straight up, but the number of names and hard to parse combos. This means most of the puzzle falls easily, but I’m left with a few pockets of intense frustration.

Today I spent a lot of time around what I presume is the seed, and it’s a typical BEQ seed: GOOGLEHOMEHUB is an au courant tech thing I may have heard mentioned a few times, but tuned out because it seemed like a typical gimmicky, overhyped, first-world, tech money pit thing. I wanted it to be GO something HOMEHUB – four words. Also forgot UGOD (there are a lot of Wu-tang members, BEQ once did an entire theme based on them) and had OOHOOH instead of OHOHOH.

I also battled in the top-right because GSTARRAW is unknown to me and nigh impossible to parse if you don’t know what it is. I did a 26-letter scan to finish where it intersects REE, hence the asterisk. Never heard of Ms. Drummond, but she seems worth noting as she is orders of magnitude better than any previous REE clueing angles. ASONIA was another mystery and PUHLEASE and THICC were hard to see. MCA falls under the “rappers BEQ is a fan of” mini-theme.

There were two really stand-out clue/answer pairs in the puzzle. First, possibly the 2nd seed BEDHAIR, due to a truly slick, misdirecting or at least vague, clue: [You might get it after stirring]. I was thinking along the lines of internet trolling there. Second, NOOGIE with [Knuckle head motion?]; again, a very clever clue.