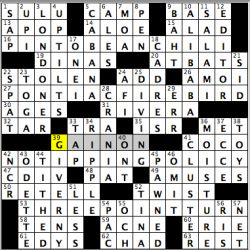 Good day, everyone! Hope all is well with you and that you’re enjoying the crisp, cool fall weather. Today’s crossword is more fun with anagrams, as the first five letters of three of the theme entries all happen to be anagrams of the word “point.” Those three different “point” arrangements make the reveal, THREE POINT TURN, a very clever entry (53A: [K-shaped driving maneuver…and an alternate puzzle title (see the beginnings of the starred answers)])

Though I am sure the additional note in the “three-point turn” clue of seeing the beginning of the starred answers was not really necessary, it is nice to have that in there sometimes during an easy, breezy solve, just to appreciate the construction and cleverness of the grid. Something tells me that I had heard, at one point in my life, that a bunch of grapes is called a CLUSTER, but I can’t say that I’ve heard that many times before coming across it today (41D: [Bunch of grapes]). There are a couple of nods to actresses in the grid with DINAS (19A: [Actresses Merrill and Meyer]) and RIVERA (31A: [Dancer/singer/actress Chita]). Only real hang-up in the grid was, surprisingly, GAIN ON, when I initially thought it was one word and was trying to figure out what the first letter was when having the rest of the letters filled in (39A: [Begin to catch up with]). Actually, I loved seeing CADRES, as I just love the word “cadre” (18D: [Core military groups]).  OK, time to make the turn for home…

“Sports will make you smarter” moment of the day: CAMP (5A: [Word with boot or summer]) – For those of you who love/hate the modern game of American football, you may have late 19th-century Yale football player and head coach Walter Camp to thank/blame more than anyone for those feelings. Regarded as the “Father of American Football,” Camp is credited, among other things, with inventing a number of elements to the game of football that are now tried and true staples, including the line of scrimmage, the snap back from the center to the quarterback, the system of downs and the two-point “safety” rule.

Thank you very much for your time, everybody! Have a great rest of your Tuesday and, as always, keep solving! 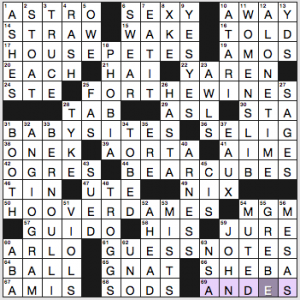 What I learned is that I shouldn’t have forgotten about skimming the puzzle for a theme revealer. Would have sped thing up a bit!

The theme didn’t all work well, I didn’t think, and some of the fill was harsh—this is what happens when you include 6 theme answers plus a revealer. The grid gets too locked down and it’s hard to get really smooth fill. 3.6 stars from me. 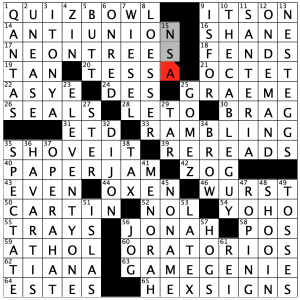 A freestyle puzzle this week. Another tour de force my Matt, who probably assembled this grid in a very short time. Then again, perhaps not, because although there are some tough entries in here, and a couple of trademark obscurities, there is nothing awful in here at all. Yes, some things you should know or have run across as a crossword solver. (See 52A and 59A below. This puzzle is on par with anything you would see from any of the major outlets. Tremendously fun puzzle. 4.8 stars from me this week.

Whew! That was a lot. And I could’ve gone on! Have a great Tuesday! 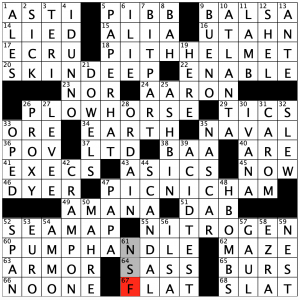 This one took a second for me to figure out what was happening with the theme, but that is mostly because I was zipping through too fast to stop and smell the roses! The revealer is at 39D

Yes, a pH test will determine if something is an acid or a base. There are a few videos floating around YouTube and such testing the pH of various brands of bottled water. It’s no wonder we are all sick! But yes, each themer has the initials “PH”, so very well done and nice and simple for a Tuesday. A solid 4.3 stars today.

That is it for today! 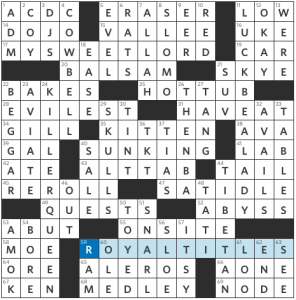