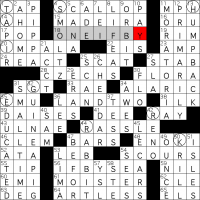 hello and welcome to episode #545 of matt gaffney’s weekly crossword contest, “Amphibious Vehicle”. for this week 2 puzzle, matt challenges us to name a 10-letter animal. what are the theme answers? well, there is a suggestive long entry broken into three 7-letter chunks: {With 36- and 56-Across, famed military signal} ONE IF BY / LAND TWO / IF BY SEA. based on this entry, the title, and the instructions, the next thing that became quite clear was that there were ten animals in the grid, five land animals and five sea creatures:

this meta was easy, but i loved it. first of all, it’s great to repurpose the “famed military signal” for puzzle purposes. i was once part of a team that wrote an entire puzzle hunt based on same. secondly, it was a very elegant touch to have the land animals spell out TIGER and the sea creatures spell out SHARK, as TIGER SHARK is one of those animals named for a totally different kind of animal. (also, my daughter’s soccer team last year was named the tiger sharks, so i still have some fondness for that name.)

with 13 theme answers, including some longish ones in those big NE/SW corners, there’s a bit of strain in the fill, but nothing too objectionable. the six-letter partial “LIFE AS we know it” and grammatically dubious franglish plural LE CARS were probably the scowliest things in the puzzle, and neither was that bad.

that’s all i’ve got this week. how’d you like the puzzle?