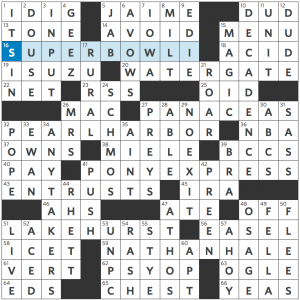 Time for an American history lesson from Mr Gaffney. Our grid alludes to six (“half a dozen”) historical events, with their corresponding years.

I went down so many rabbit holes trying to extract this one! First thought about famous quotations associated with these events:

“I am not a crook!”
“A day that shall live in infamy!”
“Oh the humanity!”
“I only regret that I have but one life to lose for my country!”

But I couldn’t think of a complete set, and because at the end of the holiday weekend, after a family trip, my blogging deadline loomed, I decided to ask for a hint, which turned out to be: what other information do you have about those events? Ohhhh, the exact dates. So I first wrote down the dates as numbers, then tried to find letters corresponding to those numbers in the grid in various combinations, but no go. Help again? Write out the dates a different way, I was advised. Ohhhhhhh. Write them out. So I did, but two were wrong:

And there we have it: the first letters of those months spell out J[ohn] ADAMS, second President of the United States of America, and certainly a “prominent person in U.S. history.” I was curious about the source of Matt’s title for this puzzle, “Half a Dozen Times,” and since I know some people who worked on the digitization of the Adams Family Papers (that’s not a humble-brag; digitizing historical materials in libraries is my day job), I decided to search there to see if it’s a famous quotation by Adams or someone in his circle. I found this sweet love letter from Abigail to John; I’m still waiting on confirmation as to whether this inspired Matt or if it’s just a coincidence. (Update: Matt confirms that it is indeed a coincidence. Remarkable letter, nonetheless.)