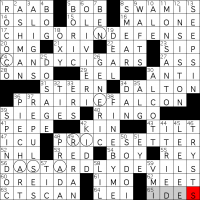 hello and welcome to episode #547 of matt gaffney’s weekly crossword contest, “Chain Gang”. for this week 4 puzzle, matt challenges us to name a geographical group. what are the theme answers? the clues for the five long across answers each have a parenthetical number or numbers:

okay, so what’s the theme? i couldn’t really make heads or tails of it at first, but the title and instructions put me in mind of mountain chains, so i was thinking all along that there would be some kind of mountain or mountains associated with each of these. it certainly seemed like we were going to get an 8-letter answer: one letter each from the first three theme answers, then two from PRICE SETTER and three from DASTARDLY DEVILS, ordered by the parenthetical number. so my first instinct was HIMALAYA, since it’s an 8-letter mountain chain.

but that didn’t really go anywhere, as i couldn’t figure out what these theme answers would have to do with any particular mountains. so i put this on the back burner for a little while. when i came back to it a few days later, i had the key insight: not mountains, but islands, are also geographical features that occur in chains. and indeed, there were islands hiding in there. how so?

well, i first noticed the connection between CANDY CIGARS and CUBAN CIGARS. then PRICE SETTER seemed like it could be related to IRISH SETTER (ENGLISH SETTER is also a dog, but england isn’t an island), and then DASTARDLY DEVILS to JERSEY DEVILS, jersey being one of the u.k. channel islands. now, that one gave me pause, because jersey devil is a thing (not a real thing, but definitely a thing) and new jersey devils is a thing, but jersey devils, plural, is not really a thing, and new jersey isn’t an island. but okay, whatever. what about FALCON and DEFENSE?

FALCON came first—the maltese falcon, of course. so we have cuba, malta, ireland, and jersey. then for DEFENSE, since i’ve had chess on the brain, brought to mind the much more common SICILIAN DEFENSE (which has featured, quite prominently, in the current world chess championship): 1. e4 c5, and all variations following thereupon, very frequently played at all levels of chess.

okay, so there are island phrases. what next? two key insights quickly followed: one, the first word in the grid and the first word of the related phrase had the same length. two, they overlapped in some places—one letter each for the first three theme answers, two for the second, and … well, okay, obviously JERSEY DEVILS had to be wrong, because it’s not the same length as DASTARDLY DEVILS, and there was no overlap. so i soon realized it had to be TASMANIAN DEVILS (yes, even in the plural, that is a real thing), which overlaps with DASTARDLY in three places (_AS_A____).

i’ve circled the overlapping letters in the grid screenshot. from top to bottom, they spell out NCERIASA, but if we order them according to the parenthetical numbers, we get CANARIES, another island group. fun fact: the canary islands are named after an animal, but that animal is not a bird! rather, the canary bird is named after the islands.

this was a very nice meta. some of these theme phrases are a little obscure/forced, but all of the underlying ones are very real, making the puzzle quite solvable. the fact that all of them included the adjectival form of the islands was a nice consistent touch—not sicily, cuba, malta, ireland, and tasmania, but sicilian, cuban, maltese, irish, and tasmanian. if you don’t know enough about chess to be familiar with the SICILIAN DEFENSE, that’s okay, too, as the meta is eminently gettable without that one letter. but since i’ve been pretty chess-obsessed this month, that entry was a plus for me.

well, that’s all i’ve got this week. i’m thankful for matt producing these delightful puzzles to challenge and entertain us. what’d you all think?