The Fireball gives us a gentle re-entry after taking a Thanksgiving break. Or maybe I was just on Peter’s wavelength. It was a pleasant six minutes.

I have a feeling the seed entry for this grid was 64a [President Nursultan Nazarbayev’s country, in his preferred spelling]: QAZAQSTAN. We see it more often as Kazakhstan. This piece from 2017 explains the country’s change of official alphabet from Cyrillic to Latin and includes a link to an article about the traditional nomadic game of kokpar, or “goat grabbing.” And yes, I did read the article about kokpar. We take our research seriously here at Team Fiend.

Peter makes QAZAQSTAN work with IRAQ, PREREQ, and SPITZ (the dog, not the swimmer). PREREQ is the weakest of the three and it’s not that bad. Impressive.

What I didn’t know before I did this puzzle: that KAL PENN hosted “Superhuman.” I did know that Tyler Hinman appeared on the show, but clearly didn’t watch it. Sorry, Tyler. 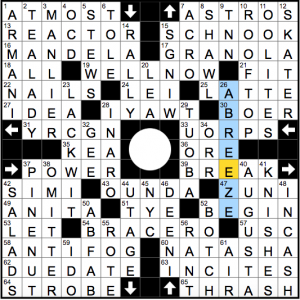 Visually, this grid is absolutely bonkers. There are eight arrows in black squares around the edges of the grid, plus there’s a giant circle in the center. On a Thursday, that’s a recipe for some serious trickery.

As it turns out, the central circle is meant to represent a roundabout (or, in various other dialects: a traffic circle, a rotary, a merry-go-round). The revealer is at 28d (and 43a and 29up? and 29left?), IN A RO / UND A / BOUT / WAY [Indirectly … or how some of this puzzle’s answers should be entered?]. And indeed, four of this puzzle’s entries traverse the paths that cars might in roundabouts, entering at the inward arrows and exiting at the outward arrows:

This theme is fantastic. I love the revealer; I love the visual element of the grid; I love the way the four roundabout entries were executed. The only minor ding from me is that there were a few bits of crosswordese in the fill (OMITTER, TOLE, ACRO-, OOLITES), but they were outweighed by the superb theme and the solidity of the rest of the fill.

Really excellent work. This is exactly what I want from a Thursday puzzle. Until next time!

The title tells us that “S and S” are going to be involved somehow. It turns out they’ve been prepended to each word in well-known two-word phrases. 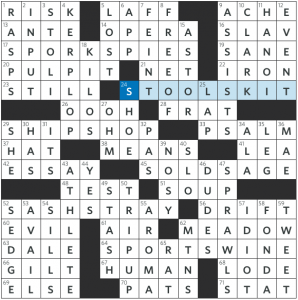 Before I caught onto the theme, I was expected the Ss to be added to the ends of words thereby making them plural. But the actual theme is much more interesting and fun. Ergo, I enjoyed it quite a bit.

There isn’t anything too flashy in the fill, probably because with six theme entries, an effort was made to keep them well separated. We do get some solid 7s in ASSISTS, ATHLETE, SPRAWLS, and the fun KER-PLOP [Sound of mud falling in water]. 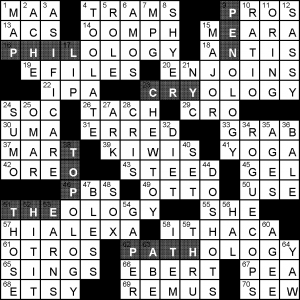 A number of -OLOGY words are misconstrued based on their starting parts. PHILOLOGY is, roughly, the study of ancient literature, but here taken to be the study of Punxsatawney Phil. One or two – PENOLOGY, a branch of criminology dealing with punishment, the penal system; and CRYOLOGY, the study of refrigeration – are a tad obscure, but since you get very easy clues and five free letters, the -OLOGY is always repeated, the puzzle is still easy.

C.C. has actually gone for the maximum block count of 42 (the LA Times maximum is higher than most puzzles). This has meant that despite the busy theme, the grid doesn’t feel constrained. There are actually some top-drawer entries: ASIFICARE and TOOLATE made for a chatty top-left. At the bottom, HIALEXA could easily be a themeless seed to build a puzzle around. Centrally, CHEWTOY is also great, though our puppies prefer freebies – around me it looks like a rogue beaver has run riot, but its just Solo, our six month-old foster failure mutt, who has been demolishing a stick, and is actually past out with the stick still in his mouth. We also have ROGUECOPS and DOSHOTS. Will ROGUECOPS is topical, it may not be so pleasant a topic of discussion – YMMV. As I’ve said before, C.C.’s puzzles always stand out as being filled carefully to a very high standard! 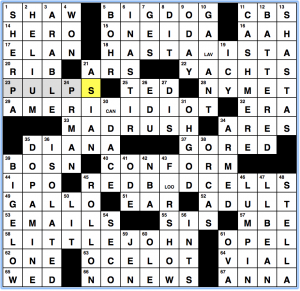 This one’s coming in late, so let’s keep things brief.  This week’s BEQ Thursday is full of bathroom humor: