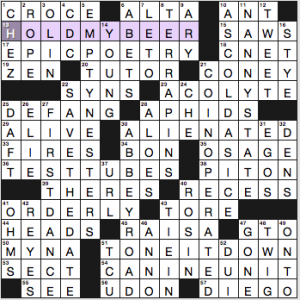 It’s not often that an answer in a themeless crossword makes me grin, but HOLD MY BEER delighted me. There are two “hold my beer”s out there—a dumb one that’s accompanied by a video of someone doing something foolish or dangerous, the version in the clue here. And one I much prefer, where it’s part of a short imagined dialogue of one-upmanship. For example, some years back Frank Longo might have said, “Nobody’s ever beaten the low word count of my 52-word crossword,” and Joe Krozel would have replied, “Hold my beer.” (Frank’s 2005 record was broken by Joe’s 2013 50-worder. (Note: Don’t try to equal those feats. They come at the cost of entries like EPHORS.)

Where was I? Yes, Robyn’s 68-worder. The other entries I appreciated include “TONE IT DOWN,” newlyweds’ FIRST DANCE beside the often-for-a-wedding SAVE THE DATE notice, EMPTY NESTERS, ABBEY ROAD, AS COLD AS ICE, and NANNY STATE.

In her constructor notes, Robyn singles out affix –ARY and plural abbrev SYNS as the junky glue. I’m going to forgive SYNS because its clue was so cute: 22a. [Warm and toasty, e.g.: Abbr.]. December rolls in this weekend, so who (in the Northern Hemisphere) isn’t keen on warm and toasty?

4.25 stars for the Friday puzzle. Whoever constructed the Saturday NYT, I hope you’re saying “Hold my beer” and will bring us a show-stopper. 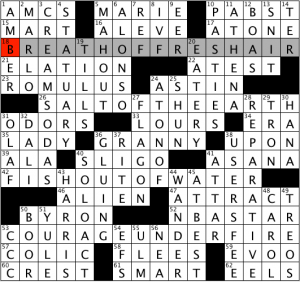 Simple theme in a 16-wide grid — idiomatic phrases that end with the four “classical elements”:

One little kvetch, bubbeleh: I wouldn’t necessarily say that a mensch has cluing equivalency to SALT OF THE EARTH; both indicate trustworthiness and integrity, but salt of the earth, considering the phrase’s origin in the Sermon on the Mount, connotes humility and simplicity as well.

Fill-wise this took me a skotch longer than a CHE grid usually does — got hung up on LOURS (which just didn’t look right) and SLIGO crossing FLAGON. The HARRIS who was [43a: Host of both the Tonys and the Primetime Emmys in 2013] would be Mr. Neil Patrick, and [59a: Sautéing shortcut for Rachael Ray?]: EVOO expands to extra virgin olive oil. Lots of nice Chronicly content otherwise: MAHOUT, ALONSO, BYRON, ATHENA.

“I think it was ‘Blessed are the cheesemakers’?” 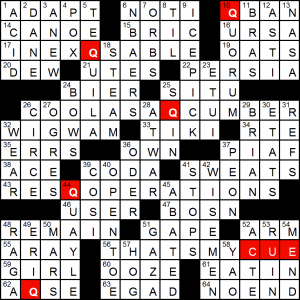 Ooh. Not a letter addition Friday, but a quasi-rebus! Very exciting! True rebuses are not accepted by the LA Times, but this bends the rules somewhat without breaking them. The revealer is the chatty THATSMYCUE, and three long acrosses (plus two shorter answers) have the “cue” sound part of them replaced by the letter Q. In the crossing downs, the Q functions normally. I like that, as it adds a layer of mystery, where correct downs are making seemingly implausible answers across. The whole thing fitted together for a pleasing “aha” moment, the holy grail of crossword themes.